Accessibility links
Top Chefs Feed Celebrities at Sundance The Sundance Film Festival wrapped up today in Park City, Utah. Some of the celebrities are walking away with a few more pounds than they arrived with, thanks to Chefdance, a series of invitation-only feasts created by top American chefs.

The Sundance Film Festival wrapped up today in Park City, Utah. Some of the celebrities are walking away with a few more pounds than they arrived with, thanks to Chefdance, a series of invitation-only feasts created by top American chefs. 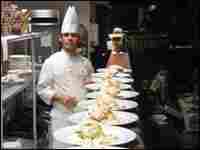 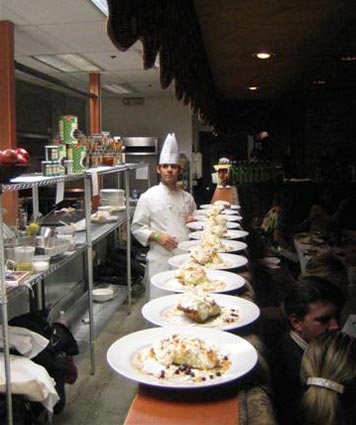 The Sundance Film Festival wrapped up today in Park City, Utah. Some of the celebrities are walking away with a few more pounds than they arrived with. The reason is an event called Chef Dance, a series of invitation only feasts created by top American chefs. Reporter Laura Weiss got to attend one of the exclusive affairs.

Tyler Florence has his hands full.

TYLER FLORENCE (Chef): 75 pounds of scallops, oh yeah and they're, they're are about like two ounces apiece. So, you know, I, I think we probably got, uh, probably got a thousand pieces of scallops here.

Mr. FLORENCE: We've had the police, right, not just staying, but the entire police, Stewart Copeland, Andy Summers, staying. We had Paris Hilton we had.

WEISS: Tyler Florence a celebrity host on the Food Network Show Food 911 and as the culinary ambassador of the Third Annual Chef Dance. He coordinates about a dozen guests chefs, cooks private meals for people like Neil Young, and is the featured chef of this night's event. But Florence doesn't let the glamour get in the way. He's focused on his culinary staff the way a professional football coach directs a team during playoffs.

WEISS: Florence covers bleeding red beets with fresh leaves of arugula as members of a 10-person assembly line drop various ingredients on a steady stream of plates. Florence's own culinary career developed in much the same way, piece by piece.

Mr. FLORENCE: When I was a kid I had two big influences in my life. It was Tony Hawk and Julia Childs. So I used to, I was, I was a, I used to ride a skateboard for a team when I was a kid and I, I loved it, and I was all about sort of like, like rock and roll and riding a skateboard and that was my thing I did. I always used to watch Julia Childs on Saturday morning with my dad, you know, it was just something we just kind of did together. And, and we just wanted to check out what new brunch thing she was working on.

WEISS: He's a risk taker and does everything with forceful precision. Culinary student Joseph Vecina has been working 18-hour days with Florence for nearly two weeks now.

JOSEPH VECINA (Culinary student): He likes to come in the day of, everything's fresh and nothing, he likes to touch things once and only once, which is amazing. I never thought of it that way and he's always describing things like, like it fell out of heaven or like it, you just picked it from the garden or like, you know, just things like that, which it's amazing that you can find chefs like that today.

WEISS: It's a style of cooking Florence picked up when he was younger.

Mr. FLORENCE: My mom got the food on the table, you know, uh, and, and, and she was just she was a wonderful cook and we had like deep rootsy like Southern food. I, I'm from South Carolina. It was just like, like black pepper, black pepper fried chicken and collard greens that are cooked on a, a pot all day with ham hocks, and ambrosia, and [sounds like] hook and eye cake. And Coca Cola in a bottle and, and like pork chops with peaches.

WEISS: Florence has truly carved his own place in the American landscape. He's got his own TV program, a book, and a new radio show. He's known as the chef of the people making meals that are simple, fresh, and accessible. By the end of this night, Florence has spooned samples into the mouths of people around him, stepped out of the kitchen to thank the security guards, and put the finishing garnishes on nearly one thousand plates. And it's the way he likes it.

Mr. FLORENCE: It's like having 250 completely crazy people in your house every night. And then demanding and, you know, it, but, but it's so much it's so much fun. It's so, it's human. You get to touch people every night and say hi how was that? Feed them. Put a spoon in their mouths. And, and for me it's the most satisfying job you could ever have I mean I don't, I don't know what I'd do. I'm a chef.