Accessibility links
Aid May Be Cut to Hamas-Led Palestinian Regime Envoys from the United States, Russia, the U.N. and the European Union consider halting aid to the Palestinian Authority unless Hamas renounces violence and recognizes Israel's right to exist. The militant Islamist group is likely to lead the next government after its success in last week's polls.

Listen
Aid May Be Cut to Hamas-Led Palestinian Regime

Envoys from the United States, Russia, the U.N. and the European Union consider halting aid to the Palestinian Authority unless Hamas renounces violence and recognizes Israel's right to exist. The militant Islamist group is likely to lead the next government after its success in last week's polls. 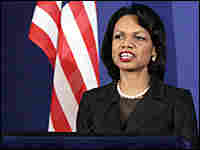 From NPR News this is ALL THINGS CONSIDERED. I'm Robert Siegel.

And I'm Michele Norris. The United States and other permanent members of the U.N. Security Council have agreed that Iran should be hauled before the council. The statement after night dinner talks gives Iran some time to decide whether to return to talks on its nuclear program or face Security Council debates that could end in sanctions.

U.S. officials say it was a big achievement to get Russia and China onboard for this more robust diplomatic effort. NPR's Michelle Kelemen is in London. She's following the story and joins us now. Michelle, what exactly did they agree on?

Well, after about four hours of talks, we're told, the dinner conversation, that got into sort of the minutia of this whole debate about what to do with Iran, the ministers that were involved, there were seven of them, top officials, agreed on a statement that says that they've all agreed that the IAEA Board of Governor meeting in Vienna this week should refer Iran to the Security Council. And the people that were involved in this were not only Secretary of State Condoleezza Rice, her European Union counterpart, also Germany, which has been involved in talks with Iran, but most importantly, the Russian and the Chinese.

The U.S. official who briefed us said that Secretary Rice feels good about this agreement, about this statement. She's been wanting this referral and getting the Russians and the Chinese to agree was considered a big achievement for this. In the other aspect that they're stressing, is that when they refer this to the United Nations Security Council, they're also gonna pass along other concerns, past concerns that the IAEA has had about Iran.

NORRIS: Now, did the U.S. have to give up much ground to reach this agreement?

The U.S. official who briefed us on this said this is gonna give Iran some time to respond, either to go back to talks or, if not, face this Security Council debate.

NORRIS: Now, Secretary Rice also had another important meeting today with the so-called quartet on Middle East diplomacy in the wake of that overwhelming victory by Hamas in Palestinian elections. Did she get what she wanted in that meeting?

KELEMEN: Well, the statement that the quartet put out was a little more subtle than what the Secretary had been suggesting. She had been suggesting that maybe there could be some broader international aid cut-off, what they came out with was a much more carefully worded statement that says donors will have to review their aid to the Palestinian authority unless the new government accepts the principles of the peace process, rejects violence, and recognizes Israel.

So it doesn't call for an immediate aid cut off, but rather this review, or it suggests that there will be this review. They also did agree to keep funding the caretaker government, and president Mahmud Abbas in the meantime, there's been a lot of concerns about serious budget crisis facing Palestinian authority. So the donors did talk about keeping the Palestinian authority afloat until this new government is in place and then dealing with that.

NORRIS: Michelle Kelemen, thanks so much.

NORRIS: NPR's Michelle Kelemen, speaking to us from London.