Accessibility links
Understanding 'The Wal-Mart Effect' Charles Fishman, author of The Wal-Mart Effect, talks about how Wal-Mart became the largest company in world history. He claims that the retail giant has such power that it affects everyone's daily lives, whether they shop at or do business with Wal-Mart.

Charles Fishman, author of The Wal-Mart Effect, talks about how Wal-Mart became the largest company in world history. He claims that the retail giant has such power that it affects everyone's daily lives, whether they shop at or do business with Wal-Mart.

And I'm Robert Siegel. To business journalist Charles Fishman, Wal-Mart is a mammoth American success story, a transforming but secretive force in the American economy. It is an expression of our preference for low prices. It is a force driving manufacturing jobs overseas. It is not so much a business as an economic phenomenon and he's written a book about it, The Wal-Mart Effect. Charles Fishman says we have to know more about Wal-Mart because of its sheer size and its power.

Mr. CHARLES FISHMAN (Senior Editor, Fast Company): There are nearly 4,000 Wal-Mart stores in the United States alone. Ninety percent of Americans live within fifteen miles of a Wal-Mart, so they are everywhere. The company is two percent of the United States economy all by itself, which is extraordinary. And Wal-Mart is the number one seller of guns in America, deodorant, DVDs, bicycles, and toys. So if you make guns or deodorant or movies, every morning you wake up thinking about the same major customer, Wal-Mart.

SIEGEL: And you have spent a lot of time traveling around Wal-Mart nation?

Mr. FISHMAN: I have. In the course of doing the book and doing all kinds of other research, I've been in more than a hundred Wal-Mart stores in 23 states. I actually am one of those people who thinks each Wal-Mart store has a slightly different personality even though there are only four or five fundamental store layouts.

SIEGEL: But what they all have in common, as you write in your book, is this core idea that people should be able to go to Wal-Mart and count on things being cheap. Not just when there are bargains or special sales, but all the time, cheap.

Mr. FISHMAN: Sam Walton had one central insight about Americans and that was that we will change our behavior to save a little bit of money. To save, you know, 49 cents on the laundry detergent we use all the time, we will shop at a different place. And he focused his entire energy and his entire company on delivering the stuff that we normally buy, the routine stuff that we buy over and over again, slightly less expensively than the places we would normally buy it. The remarkable thing is that the power of that is not just the company that it created, but the way that single idea has transformed the entire economy of the United States and even gets inside our own brains.

SIEGEL: Before you elaborate on what you see as wrong with the Wal-Mart effect, you should acknowledge you're in awe of the genius in marketing that these people have.

Mr. FISHMAN: I think it's really important to acknowledge the good that Wal-Mart does in order to have a constructive conversation about the bad. The most important thing is that Wal-Mart really truly does successfully lower prices. Groceries are a great example. When Wal-Mart comes into a grocery market where they hadn't previously done business, they lower grocery prices fifteen percent. If you're living on a modest income, if you're living on $500 or $600 a week, you're a single mom, Wal-Mart just bought you seven weeks of free groceries a year. That's what a fifteen percent savings means. Why wouldn't you shop at Wal-Mart? I think it's equally important, and in many ways more important, to understand how Wal-Mart arrives at those low prices and what the consequences of all those low prices are out in the wider world beyond the store shelf.

SIEGEL: In short, as I understand it, that process is Wal-Mart insists that it's going to sell things cheap. Therefore, it puts a pressure on everyone whom it buys from to make their products cheaper and cheaper and cheaper and cheaper. If you're extremely efficient, maybe you stay on the shelves. But in order to be that efficient you might have to, say, go manufacture overseas instead of in the United States.

Mr. FISHMAN: Exactly. The pressure at Wal-Mart is unrelenting, that is part of what is admirable about them, they are not complacent. They aren't sitting back with their arms crossed admiring the brilliance of their work, they are constantly dissatisfied with the cost that everything's delivered at. Let's make it a little less expensive. The result of that though is that eventually people have to move manufacturing offshore, they have to reduce the quality of the raw materials in their products, the plastic gets thinner, and it's very clear that Wal-Mart drives jobs overseas and ultimately undermines the quality of original products in order to deliver on this always low prices promise.

SIEGEL: In the chapter that pretty much sums up your book, the chapter called Wal-Mart and the Decent Society, you at one point pose a couple of questions, rhetorical questions. Do we value cheap merchandise more than good factory jobs? And another question, do we value the convenience of buying everything from eggs and eyeglasses, Levi's and lawn mowers, in a single place more than charming main streets with local shop keepers? Isn't the answer to both questions manifestly, yes, obviously that's how we behave. We don't care that much either about our manufacturing jobs or about our quaint shops which many Americans are too young to ever remember in the first place.

Mr. FISHMAN: I would say that the superficial answer to those questions is, yes, we value cheap prices over everything else. I think if people knew how the shirts, the clothing, and the food stuff that Wal-Mart sells at such low prices got on the shelves, I think they would be concerned about that and I think they would be uncomfortable. But my point is that Wal-Mart actually listens most closely not to protesters or op-ed writers or the government, Wal-Mart listens most closely to customers. And if customers decide they're uncomfortable, then Wal-Mart will change its behavior.

SIEGEL: One last point before I let you go, and that is that one index of Wal-Mart's success is not so stunning. And that is the rise in its stock price. And as you write, if you were fortunate enough or smart enough to buy into Wal-Mart at the beginning, you'd be rich today. But if you bought in a few years ago and you hold onto it now, you're not so rich.

Mr. FISHMAN: Well, if you bought Wal-Mart stock when it first became available and you only bought 100 shares, you'd be a millionaire several times over. In the last five years, Wal-Mart stock has actually done nothing. It's drifted down a little bit, even as Wal-Mart's profits have grown. It's much harder to grow and to grow your profits and therefore grow your share price when you're a $300 billion a year company. To double your profits you nearly have to double your sales and all of a sudden you're four percent of the U.S. economy.

SIEGEL: Well, Charles Fishman, thank you very much for talking with us.

SIEGEL: Charles Fishman is the author of The Wal-Mart Effect: HOW THE WORLD'S MOST POWERFUL COMPANY REALLY WORKS AND HOW IT'S TRANSFORMING THE AMERICAN ECONOMY. 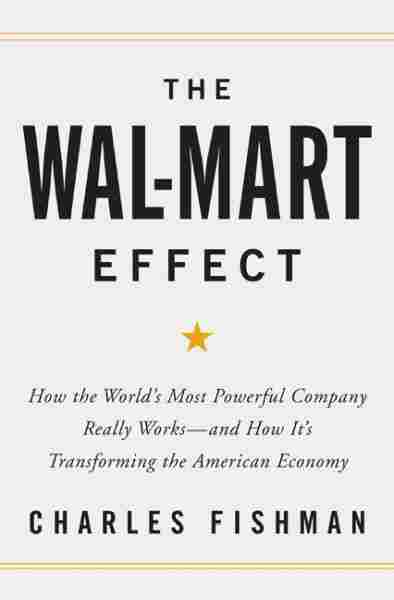