Accessibility links
Why Kids Hate to Wear Coats For every parent who warns that going out in chilly weather with no coat will make you sick, there's a kid who won't bundle up. A look at why kids hate coats, and whether there is a link between being cold and catching cold. 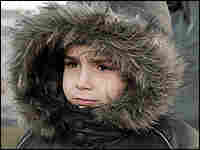 For every parent who's warned that going out in chilly weather without a coat will make you sick, there's a kid who refuses to bundle up. But should parents worry that their coatless children are inviting in disease?

Sixteen-year-old Karam Gafur refuses to wear a coat. "It's not cool," and, he adds, "they're uncomfortable."

Does Cold Cause Colds?

Jane Austen was fond of punishing her heroines for their disregard of foul weather. In Pride and Prejudice, Jane Bennet caught a violent cold after a ride through the rain for a date at Mr. Bingley's. In Sense and Sensibility, poor Marianne Dashwood nearly died of fever after a rain-soaked walk in search of that cad Willoughby.

And it appears modern girls haven't learned from their literary heroines' woes, according to Professor Ron Eccles, director of Cardiff University's Common Cold Centre. "Our lovely female students walk around with their midriffs bare in the middle of winter," says Eccles, "and I think this is bringing a lot of problems with colds."

While it may drive adults crazy to see fashion sense trump common sense, there isn't much research to back the idea that being cold can lead to a cold.

A recent study by Eccles is one of the few to suggest a link. Ninety college students dunked their bare feet in a bowl of chilled water for 20 minutes; a control group kept on their shoes and socks while they sat with their feet in an empty bowl.

Volunteers in the bare-foot group were three times as likely to develop cold symptoms within five days, according to the study published last fall in the journal Family Practice.

"It's the first time we've been able to show some support for the folklore," says Eccles. "If one looks at folklore carefully, it may not be the truth, but it's pointing in that direction."

Eccles' working theory is that many people carry around traces of rhinoviruses — the bugs responsible for the common cold — in the back of their noses. Exposure to chilly temperatures causes blood vessels in the nose to constrict, cutting down the flow of the immune system's white blood cells. The virus then flourishes, triggering cold symptoms.

But there's a flaw in the Cardiff study, says the University of Virginia's Dr. Ronald Turner: The researchers didn't check to see if a virus was ever present. "They measured symptoms," says Turner, a pediatrician who investigates the effectiveness of cold remedies, like echinacea. "They didn't do any virology, so that study has nothing to do with becoming infected," he says.

A 1968 New England Journal of Medicine study remains unchallenged as the definitive word on cold and the common cold, says Turner. Volunteers were first infected with a cold virus, then chilled and checked for symptoms. The study showed that dampness and cool temperatures didn't increase the chance or severity of a cold.

Eccles agrees that his next step is to see if a cold virus is actually present before and after chilling volunteers. In the meantime, he advises kids and fashion-conscious teens to bundle up — or risk the chance of sitting out parties due to colds.

As for Turner, his advice to parents with rebellious offpring: "Save your ammunition for bigger battles."

Karam and his friend Kendrick McCloud, also 16 and a Silver Spring, Md., resident, are dressed in layers on this 35-degree Fahrenheit day. They're wearing loose, cotton button-downs over sweatshirts.

Kendrick defends his choice of clothing as reasonable. Girls in their class, he says, walk around in flip-flops and tops that expose their belly-buttons.

Fashion trends may come and go, but Karam says his mother's expectations about bundling up hold steady.

She tells him, "'You're going to get sick, and we're going to have to pay medical bills.' I just say whatever and put it on, and then take it off later when she's not around."

Karam says he hasn't been sick so far this year. He doesn't buy the old wives' tale that being cold can give you a cold.

Pediatrician Lynn Wegner says, in this instance, the science seems to be on his side.

"A winter virus is not caused by going out in the cold air," says Wegner. "It's viral transmission." In other words, colds are caught by coming into physical contact with someone who already has a cold virus.

Acknowledging this doesn't stop most parents from acting on instinct.

Bundling kids up satisfies a deep-seated parental impulse to protect.

And culturally, it's considered the right thing to do.

But the coat revolt starts early. Toddlers throw tantrums over bundling up, and the situation doesn't improve by kindergarten.

Six-year-old Ellen Paulsen says coats are too tight and make her hot.

"She's an escape artist," says Mosher. "If you manage to get the coat on her, it will be off before you're out of the car."

Pediatricians say kids who pull this stunt aren't just trying to be difficult. What's at issue is a developing control over sensory processing.

Kids would rather be the way they came into the world: naked. And as they adapt to the world of clothing, extra layers -- particularly coats -- add to their heightened perception of constriction.

"It feels like they're being really tightly bound, and it feels bad," says pediatrician Lynn Wegner.

There's another legitimate reason that kids ditch their coats. Ellen Paulsen says parents don't seem to get it: Kids don't notice they're cold, she says, because they're running around like crazy.

Kids are comfortable because they're active. Just as an adult who takes a jog in cold weather doesn't need as many layers as someone who's just standing around.

So when it comes to forcing a coat on kids, "they really don't need it probably as much as we all fear they do," says scientist and mom Lise Eliot.

Of course, this advice does not apply in extreme temperatures. Sometimes parents must step in and take charge.

"But, growing up also demands increasing independence," says Eliot, who has written widely on children's development.

Eliot advises parents to watch what happens when kids make their own decisions.

"Kids learn through experience," she says. "Logic is a great teacher -- and if they choose not to put that coat on, or those snowpants, and they go out and get really wet and really chilly, chances are next time they might think twice about it."

Backing off doesn't come naturally. But Anne Mosher says in this case it's the only way.

"If your fingers are starting to turn blue, then we'll talk," she says.