Accessibility links
IAEA Officials Consider Resolution on Iran The governing board of the International Atomic Energy Agency meets Thursday in Vienna to consider Iran's nuclear activities. The board is considering a draft resolution offered by Britain, France and Germany that calls on the IAEA to report Iran to the U.N. Security Council. Linda Wertheimer talks to Rob Gifford.

The governing board of the International Atomic Energy Agency meets Thursday in Vienna to consider Iran's nuclear activities. The board is considering a draft resolution offered by Britain, France and Germany that calls on the IAEA to report Iran to the U.N. Security Council. Linda Wertheimer talks to Rob Gifford. 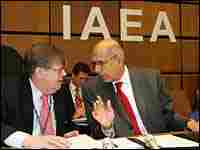 This is MORNING EDITION from NPR News. I'm Linda Wertheimer. The governing board of the International Atomic Energy Agency is meeting today to consider Iran's nuclear activities. It's taking up a draft resolution offered by Britain, France, and Germany that calls on the IAEA to report Iran to the U.N. Security Council; with both Russia and China on record as supporting the resolution, there's little doubt it will pass.

Coming up, we'll hear about Iran's position on the controversy over its nuclear program, but first, we turn to NPR's Rob Gifford, who is in Vienna, where the IAEA meeting is taking place. Rob, what is going on right now?

Well, the IAEA board has been meeting this morning, and the head of the IAEA has come out and spoken to reporters, Mohamed ElBaradei. He didn't really say much about what was going on inside. What he did say,though, was that we should not yet call this a crises. He said, it is certainly at a critical phase in the standoff between the IAEA and the Western powers and Iran, but we should not call it a crisis just yet.

WERTHEIMER: What's on the table?

GIFFORD: Well, what's on the table is this motion, this resolution which does contain certain technicalities, certain logistics. It demands that Iran reestablish a freeze on all its uranium enrichment. It demands that the IAEA have more power in its nuclear investigations inside Iran. But underlying the whole document, and this demand that Iran be reported to the U.N. is really the lack of trust which is now emerged, and has developed. I mean, the key line, really, is the absence of confidence that Iran's nuclear program is for peaceful means, and that's really what's running through this whole debate.

WERTHEIMER: And I gather that the IAEA is sufficiently upset that they are relatively united, and this represents some kind of compromise.

GIFFORD: Well, it has been something of a compromise. The European powers and the United States have presented it as a victory, as unanimity within the IAEA, but in order to get the Chinese and the Russians on board, they had to allow for a month, until March, until the next meeting of the IAEA, before, even if they agree today or tommorrow that Iran should be reported the U.N., they will have to have this month before that actually happens. And that allows a month of more diplomacy, possibly. It allows a month for some sort of resolution to be reached.

WERTHEIMER: Rob, once the IAEA votes to report Iran to the Security Council, if in fact they do that, what would that mean? What happens?

GIFFORD: Well, of course, we'll have to see how Tehran responds to that, but I think what we will see is a lot more urgent diplomacy to try to bring about some kind of resolution. We may see more focus on the Russian plan. The Russians have offered to enrich uranium for the Iranian government on Russian soil, so that there could be no doubt that that uranium could be put towards weapons use. We may well see more focus on that.

I think, though, really, we're on the start of a very long path. I don't think we should be under the illusion that this is gonna reach any crisis point just yet. We may get toward sanctions, but even getting there, I think is months and months away, and certainly, most people are ruling out any kind of military action.

GIFFORD: Thanks very much, Linda.