Accessibility links
Q&A: The NSA's Domestic Eavesdropping Program Revelations continue about the National Security Agency's domestic eavesdropping program, thanks to congressional pressure, lawsuits and press reports. Here's a look at what we know, and what we don't know, about what the NSA has been up to. 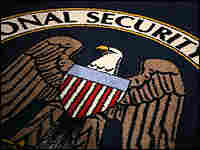 The nomination of Air Force Gen. Michael Hayden to head the CIA has also helped keep the controversy alive; Hayden was head of the NSA when the program began, and was instrumental in shaping the legal framework for domestic surveillance. Here's a look at what we know, and what we don't know, about what the NSA has been up to:

Q: What's at the center of the NSA controversy?

At issue is the extent to which the NSA has the legal authority to eavesdrop inside the country. The NSA conducts wiretapping outside the United States all the time, but after Sept. 11, the Bush administration directed the agency to include phone calls that started or ended in the United States, if one person was believed to be linked to al-Qaida.

Ordinarily, the agency would have to get a warrant from a special surveillance court to conduct any eavesdropping in the United States, but this new program dispensed with those warrants because, according to the administration, time is of the essence in detecting terrorist plots.

The New York Times disclosed the existence of this program in December 2005, and the administration quickly acknowledged that those reports were largely correct. But the president and others in the administration insist he has the legal authority to do this.

Is that as far as the new effort goes?

Civil-liberties lawsuits and press reports have alleged that the program is much broader than the White House acknowledges. One lawsuit says that AT&T gave the NSA access to a vast database of domestic communications records. According to press reports, most recently in USA Today, phone companies such as Verizon and BellSouth also provided data about purely domestic phone and Internet traffic. (Verizon and BellSouth have since said in statements that they have not given customer call data to the NSA.)

The USA Today story says these domestic efforts did not actually listen in on such phone calls; instead, they analyzed traffic patterns. The administration has refused to confirm or deny the existence of this broader surveillance dragnet, but it continues to insist that all NSA programs comply with U.S. law.

What sorts of warrants are usually needed for such surveillance?

The Foreign Intelligence Surveillance Court was created in 1978 to authorize surveillance to protect national security. To get a warrant from this court, the Justice Department would ordinarily submit an application to show that the target is an "agent of a foreign power," essentially a suspected spy or terrorist. The administration says it continues to obtain these warrants. Indeed, the number of Foreign Intelligence Surveillance Act warrants is at an all-time high. The court approved 2,072 surveillance requests in 2005, an 18 percent increase over 2004.

The government says that when it's engaged in hot pursuit of al-Qaida suspects, high-ranking NSA officials make the call on whether to listen in on al-Qaida communications without a warrant.

Many legal scholars believe the alleged monitoring of purely domestic phone traffic also requires a warrant. The administration has not explained why it believes such efforts are legal because it has not acknowledged that this activity has happened.

Whom does the program target?

The program focuses on communications believed to be either coming from or going to terrorists and terrorist sympathizers.

Administration officials have described the effort as a kind of early-warning system for attacks planned by terrorists. Officials insist they are not listening in on purely domestic calls.

Why are civil-liberties groups objecting to the program?

They say the lack of judicial oversight means the program is open to abuse, and could be used to monitor protest groups, as happened in the 1960s. The American Civil Liberties Union and the Center for Constitutional Rights have filed suit against the government on behalf of journalists, scholars and lawyers who fear their communications have been monitored, because they regularly are in contact with people who could be under suspicion.

Critics point out that before FISA, some presidents abused executive power by eavesdropping on "enemies" -- such as Martin Luther King Jr. -- and then acting as though these taps were justified by the president's need to protect national security. They also note that FISA has provisions for emergency situations: The executive branch can begin a wiretap and then obtain a warrant within 72 hours if time is of the essence. And if war is declared, FISA allows warrantless wiretapping for 15 days, after which Congress must be consulted.

How does the Bush administration respond to these charges?

The Bush administration says that courts have recognized the president's inherent authority to gather foreign intelligence in the interests of national security. It says the president's role as commander-in-chief, enshrined in the Constitution, is something that Congress cannot take away. So FISA, the administration argues, could not stop the president from doing his job.

Moreover, administration officials point out that FISA outlaws warrantless wiretapping "except as authorized by statute." The White House believes that Congress passed just such a statute when it approved the Authorization for Use of Military Force on Sept. 14, 2001. Even though that resolution contains no mention of domestic surveillance, the White House argues that it encompasses any measure needed to protect the country, because it approves the use of "all necessary and appropriate force" in the war on terrorism. The administration supports this argument by citing the Supreme Court's decision in the case of Yaser Hamdi, a U.S. citizen held as an enemy combatant after being captured in Afghanistan. The high court ruled that the congressional force authorization implicitly authorized the president to detain enemy combatants, even though it contains no explicit mention of that power.

How has Congress responded?

Democrats and Republicans alike have expressed outrage over the NSA activity, but have offered different responses. Republican senators like Mike Dewine (R-OH) and Arlen Specter (R-PA) have offered legislation that would essentially bring NSA domestic surveillance under the oversight either of Congressional committees, or of the Foreign Intelligence Surveillance Court. Some members, however, say these bills would essentially legalize an activity that is illegal. They also insist that before Congress passes any new legislation, the administration should explain the current scope of NSA activity. Congress has also held hearings, but few new details have emerged from these sessions. The administration has also resisted calls for key administration figures, such as former Attorney General John Ashcroft, to testify before Congress.