New York Times critic Elvis Mitchell talks with Scott Simon about how American movies have dealt with racial issues over the years. This year's Oscar nominee Crash expands the debate beyond black and white. 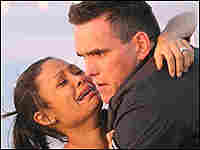 There is no subject that intrigues, repels, frightens, confuses, inspires, contradicts and exasperates Americans more than race. Consider this week, Coretta Scott King, the civil rights activist and widow of Martin Luther King, Jr., died. She spent her life promoting the work of her husband, who received the Nobel Prize for Peace, who was murdered in an act of racial hatred. This week began black history month, an official period of racial and cultural appreciation that many Americans disclaim as either too laudatory or belittling.

And finally, Crash, a movie about the complexities of race relations in Los Angeles. Written and directed by a white man, and staring some of the most exciting black actors in show business, it was nominated for an Academy Award for best picture.

SIMON: That's Loretta Devine and Matt Dillon in Crash. Our entertainment critic, Elvis Mitchell joins us now. Elvis, nice to have you back.

Mr. ELVIS MITCHELL (Critic, New York Times): Good to be back, Scott. How are you?

SIMON: Fine, thanks. Crash is a--I don't mind saying this--a remarkable film, in part because it very vividly depicts the fact that Hispanics, Asians and Muslims are part of what we have to talk about in race in the United States today.

Mr. MITCHELL: I think it understands this conversation is now just expanded. I was at the first public screening of Crash in Toronto in the fall of 2004, and the director, who, incidentally, is a white Canadian, Paul Haggis, why the director came to me and just was distraught because what he was hearing is that people were saying it's just another movie by a white liberal, basically saying the same thing. And I think what he was sort of confused by, and I was too, was this sort of feeling in the movie industry that the problem of race has been solved, at least in the movies already, I think because movies don't want to deal with it anymore, partially because it's one of those things they think automatically spells a lack of audience interest. And Crash has happily proven that not to be the case. And it couldn't have come out in a better year--the year of Hurricane Katrina, where the whole world got a chance to see that the race conversation hasn't changed a whole lot in this country.

SIMON: I want to ask about some films that have gone on in the past. Particularly one in 1964 that doesn't get a lot of attention these days, Nothing But A Man, starring Ivan Dixon and Abby Lincoln. Is this a film that is kind of a snapshot of the early '60s? And does it hold up well? Is it pertinent today?

Mr. MITCHELL: I think it absolutely is, Scott, because the question that Nothing But A Man asks that's still relevant is what kind of a black person are you going to be in this country? It's really about a young, black man trying to move out of where he is, going into a place to work, and leaving his hometown behind; but finding that basically, the same kinds of conditions and problems he thought he had left behind are still very much a part of his present.

SIMON: It was in the 1960s that Sidney Poitier became a household name and an Academy Award winner. In addition to Lilies of the Field, I suppose the, really the role for which he's often still best known is Virgil Tibbs, the Philadelphia cop who comes down to Mississippi, where the local white police chief, Chief Gillespie is played by Rod Steiger, In the Heat of the Night. Was there an education in relation, in race relations on set as well, as on the screen, Elvis?

Mr. MITCHELL: There certainly was. And what comes out of a lot of that is you think about the way Sidney Poitier is influenced actors who've come after him. And what was key in his formation, as both an actor and as a person, is that he did not grow up in the United States. And so, as a result, he didn't react in a public way, the way a lot of black Americans did. There's a scene in the movie where he's slapped by an old, white man. He slaps him back. That scene was cut out of a lot; basically, a third of the country didn't get to see that scene in 1967.

SIMON: I didn't know that.

Mr. MITCHELL: Because, oh, sure. Because he said if somebody slaps me, I'm going to hit him back. And that was not something, you know, if you did that in the South even in the '60s, you still could get lynched, or be disappeared. And he just said this is the way that I react to this.

SIMON: The slap is worth listening to.

.(Soundbite of In The Heat of the Night) Mr. LARRY GATES (as the Slapper): Why did you two come here? Mr. SIDNEY POITIER (as Virgil Tibbs): To ask you about Mr. Colbert.

Mr. GATES (as the Slapper): To question me?

Mr. POITIER (as Virgil Tibbs): We were just trying to clarify some of the evidence. Was Mr. Colbert ever in this greenhouse? Say, last night, about midnight? Mr. GATES (as the Slapper): There was a time when I could have had you shot. SIMON: Larry Gates iss the slapper who becomes the slappee along with Rod Steiger and Sidney Poitier. The Slappy White, as it were.

SIMON: What did you think of Hustle And Flow? Terence Howard, who starred in it, got an Oscar nomination this week.

And it's a sort of a fascinating subplot of Crash that a lot of black people respond to. Which is you have these scenes between Terence Howard and Thandie Newton, who are both light skinned and probably are biracial, again defining themselves as how black they are. That's a question that has never disappeared.

And Hustle And Flow like Crash, was written and directed by a white man; Craig Brewer(ph), a southerner who sort of takes, I think, a lot of the ethos, this kind of stuff we see in short stories by Flannery O'Connor. Which is about the way the South hasn't really changed and trying to stand up for yourself and move forward; and how tough, if not impossible, that is.

SIMON: There's another film you wanted to draw to our attention, which I guess, you saw recently. CSA: A Mocumentary.

Mr. MITCHELL: It first played at the Sundance Film Festival in 2004. And it's a great, little movie; a mocumentary about what the world would be like had the South, the Confederacy won the Civil War. And it's really hilarious.

(Soundbite of mock Pledge of Allegiance)

Mr. MITCHELL: It's had some limited theatrical release around the country. And it will definitely get a video release. I can't recommend it highly enough to people.

SIMON: Our entertainment commentator Elvis Mitchell, who also hosts The Treatment out of KCRW in Santa Monica, speaking with us from New York.

Elvis, thanks very much.