Listen
A Gay Football Player, 'Alone in the Trenches' 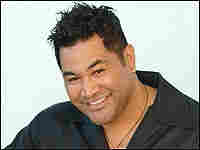 Esera Tuaolo toiled for many years as a 300-pound defensive lineman in the ultra-macho National Football League. He played in the Super Bowl. Sometimes he sang the national anthem before the game.

All the while he was hiding a secret from teammates: his sexual orientation. He tells Liane Hansen about his memoir of the experience: Alone in the Trenches: My Life as a Gay Man in the NFL.

Excerpt from 'Alone in the Trenches' 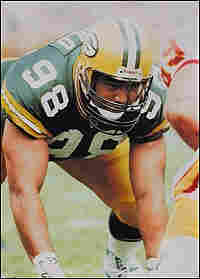 Esera Tuaolo in his days as a nose tackle for the NFL's Green Bay Packers. hide caption

I settled into my stance for the last play of Super Bowl XXXIII. The field glowed under the lights. Flashbulbs popped around the stadium. We, the Atlanta Falcons, faced the Denver Broncos led by their superstar quarterback John Elway. Denver had the ball with a 34-19 lead. I lined up at my usual position, nose guard, across from the Denver center, who was poised to snap the ball to Elway. My knuckles gripped the turf.

The Broncos quarterback took the snap and dropped to his knee to let the clock run out. I touched him first. When the ball carrier is on the ground, someone on the defense must at least touch him so he's ruled down. Since I touched Elway, I was credited with the tackle.

A routine play, but it terrified me. And that was not the first time. That game and that play were televised to one billion people around the globe. Someone could have recognized me and blown my cover. In the past, whenever my image appeared on the screen -- when I made a big play, sang the national anthem -- I lived with the fear that I might be outed. This was January 31, 1999, and at that point I had been playing for eight years in the NFL. Before that, I had played four years of college football. In all that time, not one teammate, coach, or sportswriter knew I was gay.

The National Football League is the number one entertainment in the world, and the Super Bowl is its showcase event. Media from all over -- places like Japan and Lebanon, where they don't even play football -- report on the spectacle. The Super Bowl is the biggest event that happens every year in the United States.

What if one of those billion people watching recognized me as the stranger he had picked up in a gay bar? All he had to do was out me to the press and the story would be all over the headlines: "Gay Man Makes Final Tackle in Super Bowl." My football career would be finished.

No more Super Bowls, no more Sundays playing ball. No more paychecks, no more financial security. No more locker-room banter, no more camaraderie with the guys. I would be banished from the NFL fraternity.

During my nine years in the NFL, I lived that close to the edge of destruction. My success tormented me. The better I did, the more exposure I received. The more exposure, the greater the chance of someone discovering my secret. A secret that a man who plays the most macho of team sports is not supposed to have. The stress nearly killed me.

I am a Samoan who grew up in Hawaii. My family lived in a hut with a dirt floor. I'd gone from that poverty to the fortunes of the NFL. Football gave me a college scholarship, the chance to buy a house for my mother, the opportunity to travel, and much more. My NFL career lasted nine years with five teams -- the Green Bay Packers, Minnesota Vikings, Jacksonville Jaguars, Atlanta Falcons, and Carolina Panthers. I'll go down in history as the first player to sing the national anthem and then start an NFL game, the first rookie nose guard to start all sixteen games, and the last guy to "tackle" John Elway in his storied Hall of Fame career.

The dream to succeed in the NFL and achieve all that football had to offer was at times a nightmare. I struggled to survive the combative, macho world dominated by a culture that despised who I really am. Had opponents and teammates known I was gay, they would have mocked me the way I heard them ridicule others with sexual slurs. More than likely -- as several former teammates admitted -- they would have tried to injure me so that they would not have been viewed as guilty by association.

In other words, they would have taken me out so that their own masculinity would not be questioned for playing alongside a sissy. It's rough down in the trenches, where linemen weighing more than three-hundred pounds hurl themselves at one another in brutal hand-to-hand combat, but it is nothing compared to the pain I kept buried inside so I could play out my dream.

This is the story of how I dared to dream, not only of surviving professional football, but of living openly for who I am, a gay man. 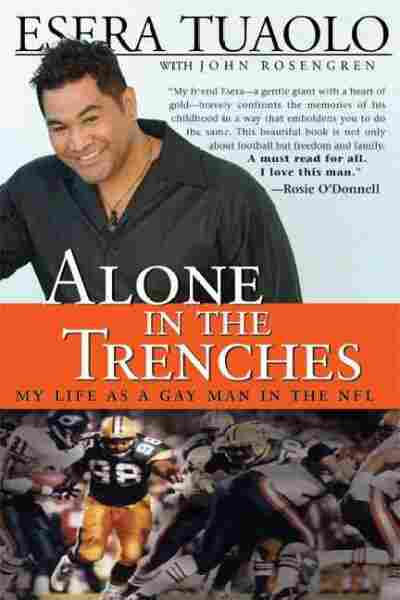 Alone in the Trenches

My Life As a Gay Man in the NFL

by Esera Tuaolo and John Rosengren