The Orchestra of Paris performs, conducted by Christopher Eschenbach.

Hear a Portion of 'Color, for Orchestra'

Hear a portion of 'Ciaccona' 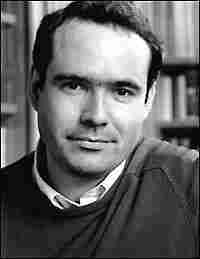 Marc-Andre Dalbavie's new piano concerto was recently given its American premiere by the Cleveland Orchestra. The Chicago Symphony plays it later this week.

Commissioning and performing new music is a risky business for any classical orchestra. Creating the repertoire of the future is important, but with today's tight budgets, filling the seats of the concert hall often takes precedence. So, many orchestras stick to traditional repertoire. Yet as Vivian Goodman of member station WKSU reports, for one contemporary French composer, American orchestras have proven particularly welcoming.

His name is Marc-Andre Dalbavie, and he says he doesn't really know why American orchestras have supported his work.

Orchestras in Chicago, Cleveland, Minneapolis and Philadelphia all have been eager to perform his music.

The Cleveland Orchestra's Assistant Conductor James Gaffigan recently conducted the American premiere of Dalbavie's piano concerto, which was jointly commissioned by Cleveland, the Chicago Symphony Orchestra and the BBC. The Chicago Symphony will play it later this week.

And sometimes you don't know where the musicians are going, either. Dalbavie has played with the relationship between the orchestra and the audience, sometimes placing orchestra members in the audience.

But Dalbavie's approach is not new. He's putting a modern spin on a technique that goes all the way back to Gregorian Chant and the polyphony of renaissance motets.

Norwegian Pianist Leif Ove Andsnes, for whom Dalbavie wrote his piano concerto, says this is one of the things that sets Dalbavie apart from some other contemporary composers:

"I personally believe that great contemporary music is written with a consciousness of tradition," he says. "Dalbavie knows so much about the music of the past."

The 44-year-old retreats to a 15th century farmhouse in the French countryside to compose.

"I'm completely alone," he says. "Every door is shut and the windows shut also, and I really work everyday in this atelier in a sort of isolation world."

Christoph Eschenbach is music director of the Philadelphia Orchestra and the Orchestra of Paris. He conducts the latter group on the only recording of Dalbavie's compositions.

"He has a special language and I like that very much," says Eschenbach, who pronounces himself "fascinated" with Dalbavie's music. "I need to do it for my own satisfaction and to give it to the audiences."

Dalbavie's music has been labeled "accessible," but he insists he doesn't write for an audience. He says he composes for himself, to create something new.

"I'm deeply convinced that art is the explosion of meaning," he says. "Each person finds his own meaning in music. I don't want the public to understand what I wanted to do for myself. If they find a different meaning I am happy."