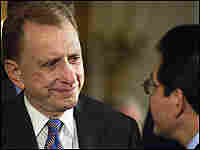 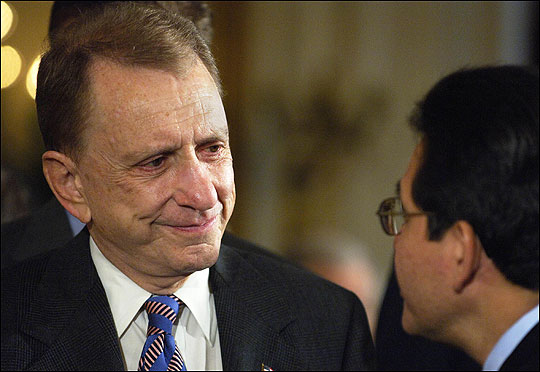 This is MORNING EDITION from NPR News. I'm Steve Inskeep. Today the Senate Judiciary Committee holds its first hearing on eavesdropping by the U.S. government. President Bush acknowledged the U.S. listened to the phone calls of Americans without a warrant. It started after the September 11 attacks. The President claimed the authority to bypass a law that set up a secret court to provide those warrants. Today the Senate Judiciary Committee is hearing a single witness, Attorney General Alberto Gonzales.

Those memos could prove extremely interesting. "Newsweek" reported last week that at various points in recent years, top Justice Department officials including the Deputy Attorney General and even then Attorney General John Ashcroft fought the warrantless surveillance program because of worries about its legality. The President, however, has continued his staunch defense of the program.

President GEORGE W. BUSH: The program is legal. It's designed to protect civil liberties, and it's necessary.

TOTENBERG: In his State of the Union address, the President pointed to two of the 9/11 hijackers who made calls abroad and suggested that had his eavesdropping program been in place then, it might have prevented the attacks.

President BUSH: If there are people inside our country who are talking with al-Qaeda, we want to know about it, because we will not sit back and wait to be hit again.

TOTENBERG: But the Foreign Intelligence Surveillance law, enacted in 1978 and updated since then, does not prevent warrantless spying on foreigners like the hijackers. Indeed, some al-Qaeda conversations reportedly were tapped before 9/11, but not translated in time. The law requires a court order only in cases targeting Americans, or legal resident aliens, and it requires a showing of probable cause to believe the calls could provide intelligence about terrorist activity. Bruce Fein served as Deputy Associate Attorney General in the Reagan Administration.

Mr. BRUCE FEIN (Former Deputy Associate Attorney, Reagan Administration): There is nothing in the statute that prevents a president from spying on the enemy. It's simply that Congress has directed how it should be done.

TOTENBERG: The way the system worked before the Bush executive order was this. If a terrorist agent called someone in the United States or vice versa, and the call was intercepted, it would be screened. If the call only targeted foreigners and only incidentally involved Americans, no warrant was necessary. But if an American was involved and there was some reason to continue surveillance of that American, the Attorney General had to seek a warrant from the FISA court. And he could do that while the surveillance continued.

Of the 16,000 warrants sought under the act, only five have been denied. The Bush executive order, however, allows continued surveillance of Americans with no court order. Just why that's been necessary is unclear since FISA provides for retroactive warrants. It allows surveillance for three days before seeking a retroactive warrant and 15 days with possible extensions after an attack.

While the public, at least initially, seems to support the President's exercise of his executive power to override FISA, most legal experts, including many conservatives, have expressed serious concerns about the President, as they see it, breaking the law.

When Congress enacted FISA, it wrote into the law that it's the exclusive means for dealing with electronic intelligence surveillance. The law has been continually updated, as it was just five weeks after 9/11. Yet if there were problems at that time or since, the president has never sought to fix them by amending the law or by going to the FISA court.

Indeed, only eight members of Congress and the Chief Judge of the court were informed of the surveillance program and they were sworn to secrecy, though at least two of the Congressional leaders expressed reservations about the program's legality in writing at the time.

The President's position is that when Congress authorized him to use all appropriate force in the wake of the 9/11 attacks, it authorized the use of warrantless surveillance of Americans. Attorney General Alberto Gonzales in an interview with NPR pointed to the history of war.

TOTENBERG: The President has also maintained that regardless of FISA and even without Congressional authorization of any sort, he has the inherent power as Commander in Chief under the Constitution to conduct warrantless surveillance of Americans. University of Chicago Constitutional Scholar Cass Sunstein, normally considered something of a liberal, is sympathetic to the president's argument.

Professor CASS SUNSTEIN (University of Chicago Constitutional Scholar): The President, as Commander in Chief, certainly has the power to repel a sudden attack on the United States. That means he doesn't need a law to authorize him to act, and if there's a law stopping him from acting, that law is unconstitutional.

TOTENBERG: Sunstein agrees with those who say that the President, in positions taken on torture, military tribunals and other matters, has overreached on claims of executive power.

Professor SUNSTEIN: But this one, the NSF one, the President really has a stronger claim than in the other contexts, and I fear that people have given him a less than fair hearing on this particular one because of the overreaching that we can find in other areas.

TOTENBERG: In making the inherent power argument, the Justice Department recently released a 42-page legal justification, pointing to the many presidents who conducted warrantless surveillance of spies, dating back to the founding of the Republic. Among the scholarly work cited in that paper is an article co-authored by Duke Law professor Curtis Bradley, normally a strong defender of executive power. In this case, though, Bradley suggests his work was misrepresented.

Professor CURTIS BRADLEY (Law Professor, Duke University): It's taking the article out of context to claim that the President has this inherent authority to conduct domestic surveillance, when in fact he's operating against a specific statute.

TOTENBERG: The Administration has suggested that it is too cumbersome and difficult in the modern world to seek warrants in some circumstances, even with a law that provides for retroactive warrants. Again, Professor Bradley.

Professor BRADLEY: Their statements still have been fairly vague about why they find FISA statute's inadequate. But even assuming for a moment that that claim is correct, it doesn't really address the bigger problem here, which is that instead of going through the usual legal channels of updating the law, the Administration, largely in secret, decided to make their own judgment about whether the law was out of date and decided that it was and that it need not be followed.

TOTENBERG: Bruce Fein, who served not only in the Reagan Justice Department, but as counsel for then-Congressman Dick Cheney on the Iran-Contra committee, says the Administration seems bent on crippling Congress.

Mr. FEIN: The President wants to set a precedent here that will lie around, in my judgment, like a loaded weapon, ready to be used by any incumbent to say, As long as we're fighting terrorism, Congress, you are irrelevant.

TOTENBERG: If the President can disregard FISA, says Fein, then why couldn't he set up concentration camps for Arabs, even if Congress forbids it? Why couldn't he authorize the murder of an American suspected of plotting a terrorist attack? Why bother with a trial?

FEIN: I don't think any American wants to suggest that we will eliminate every right we have under the Constitution in order to defeat the enemy,and then we end up with a non-democratic, totalitarian state.

Mr. ANDREW MCCARTHY (Former Federal Prosecutor): I can actually imagine certain circumstances where a President actually would order American citizens to be killed.

TOTENBERG: Andy McCarthy is a former federal prosecutor who the Bush Administration recommends as a defender of its policy. He notes that, in fact, on 9/11 the President did authorize the shooting down of one of the planes before passengers took matters into their own hands.

Mr. MCCARTHY: The Administration actually issued an order which would, if it had been carried out, have had the effect of killing some innocent civilians in order to spare entire cities.

TOTENBERG: At rock bottom, he argues, the question is not legal, but political.

Mr. MCCARTHY: You have to decide, ultimately, do you trust the guy that you put in the Oval Office or not.

TOTENBERG: Critics of the President's policy counter that the Constitution is premised on the notion that men, and particularly kings and presidents, are not angels. Thus, our system of checks and balances.

The question for the Senate Judiciary Committee today is whether the system is out of whack.

INSKEEP: You can find more arguments for and against warrantless eavesdropping by going to npr.org.