Accessibility links
XL: A Less-Than-Super Bowl Super Bowl XL falls somewhere between brilliant and bland on the 40-year timeline of title games. The Pittsburgh Steelers and star Jerome Bettis are popular winners, but play was erratic and the referees loomed a bit too large.

Super Bowl XL falls somewhere between brilliant and bland on the 40-year timeline of title games. The Pittsburgh Steelers and star Jerome Bettis are popular winners, but play was erratic and the referees loomed a bit too large. 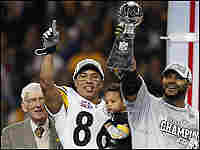 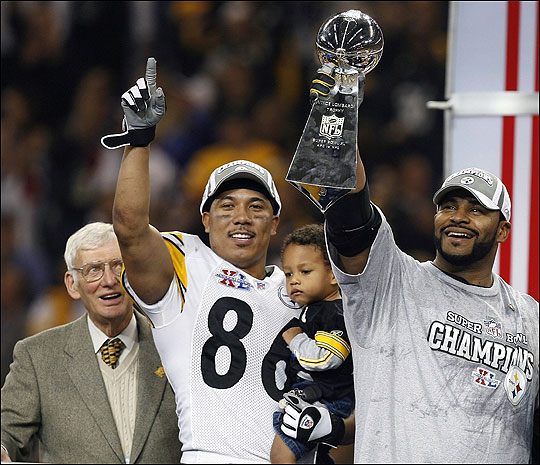 Commentator John Feinstein was watching the game and is with us. Good morning, John.

INSKEEP: Where does this Super Bowl fit in with the others in your mind?

It had one truly spectacular, memorable play, the reverse touchdown from Antwaan Randle El to Hines Ward that broke up the game in the fourth quarter. That was a great call and a superbly executed play. And you know, Randle El was a quarterback in college, at Indiana, and Steve, he's now 15 for 17 completing passes on trick plays as a wide receiver in the NFL. So he's a pretty good quarterback too.

INSKEEP: Is he at the right position?

But certainly that flash position that Bill Cowher created years ago for Cordell Stewart still has a place in the NFL, quarterback/wide receiver.

INSKEEP: It took the Steelers a few decades to win the Super Bowl once again.

Mr. FEINSTEIN: Well, after they won the four, with the Steel Curtain over that six-year period, there were these big posters in Pittsburgh, one for the thumb, for their fifth Super Bowl title. Well, it's very different thumbs 26 years later that finally wore another Super Bowl ring. And of course unlikely them being a wild-card team winning three games on the road. But they became America's team during this run because of Jerome Bettis going back to Detroit. Did you know he was from Detroit, Steve? I'm not sure that ever came up last week.

INSKEEP: I heard something about that over the course of the week, yeah.

Mr. FEINSTEIN: But because of all that, and Bill Cowher being a great coach who hadn't won a Super Bowl. So all of that factored into them being the popular favorite, to put it mildly, in this game. It was as if the Seahawks were just there to lend support.

INSKEEP: How big a factor was Bettis in this game?

Mr. FEINSTEIN: Not that big a factor. I mean, he ran the ball effectively when he was in, but the play that mattered the most from the running back position, of course, was Willie Parker's record-breaking run of 75-yards. But still, it's a wonderful way for a great player to cap a career, winning a Super Bowl in his hometown.

INSKEEP: And the officials made a difference last night.

Mr. FEINSTEIN: They always seem to, don't they. We talked about this throughout the playoffs. A couple of controversial calls. The one that I noticed the most was that holding call against Kurt Locklear of Seattle when Seattle was driving to take the lead in the fourth quarter. And John Madden said on the replay he didn't see a hold. I didn't see a hold. And I'll bring it up one more time, Steve. The NFL is the richest league there is in sports and the only one that doesn't pay for full-time officials. They need to reconsider that during this off-season.

INSKEEP: We'll stop it right there. And again, the Pittsburgh Steelers are the Super Bowl champions, defeating the Seattle Seahawks 21-10.

INSKEEP: Those were the thoughts of John Feinstein, who's working for us today, though his father died yesterday. His commentary this morning is dedicated to the memory of Martin Feinstein, who was the former Executive Director of the Kennedy Center for Performing Arts here in Washington, D.C. He was 84-years-old.