Accessibility links
An Inside Look: President Bush's 2007 Budget Fiscal 2007 may seem like a long way off. But carrying out a February ritual, President Bush sent his proposed budget for next year to Congress on Monday. NPR reporters analyze the budget in key areas like military and health care spending.

An Inside Look: President Bush's 2007 Budget

An Inside Look: President Bush's 2007 Budget 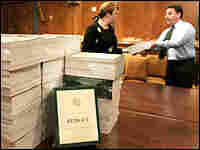 The budget is handed out on Capitol Hill. Mark Wilson/Getty Images hide caption 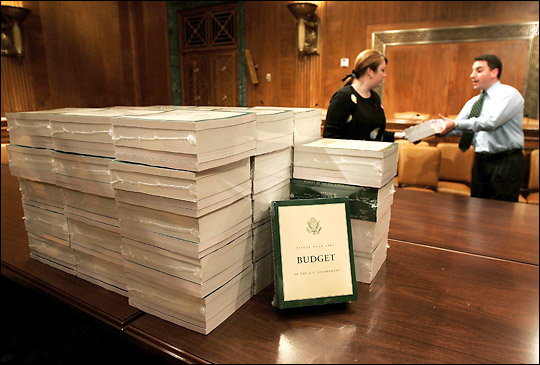 The budget is handed out on Capitol Hill.

Fiscal 2007 may seem like a long way off. But carrying out a February ritual, President Bush sent his proposed budget for next year to Congress on Monday. Now, lawmakers will spend months arguing over it and changing it, before ultimately deciding how to spend taxpayer money.

The $2.77 trillion budget blueprint is a window into the president's priorities and thinking in an election year.

NPR reporters offer their analysis of the budget in areas including military funding, health care spending and education.

Defense Budget Would Be a Record 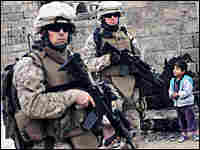 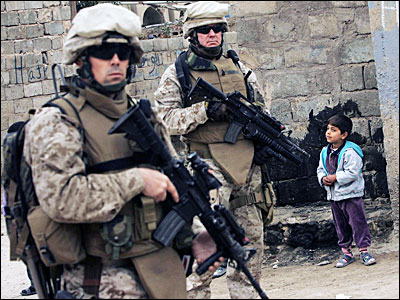 U.S. Marines patrol in Khaldiyah, Iraq, Feb. 2. The record budget for defense spending doesn't include spending for U.S. operations in Iraq or Afghanistan.

President Bush has proposed a record United States defense budget for 2007 -- more than $439 billion. That figure does not include the tens-of-billions of dollars in expected costs for U.S. operations in Iraq and Afghanistan. The Bush administration funds the Iraq and Afghanistan deployments through separate legislation. Some members of Congress have complained bitterly about that, saying it hides the true costs of the wars.

The proposed defense expenditure for 2007 is heavy on investments in equipment and training designed to counter terrorism and irregular warfare. For instance, it calls for a 15-percent increase in the number of U.S. special forces. Also, it includes significant funding for language training and production of more unmanned aerial and ground vehicles.

But the budget also would preserve expensive weapons systems designed to counter conventional threats from well-armed countries. That is likely to face criticism on Capitol Hill, where lawmakers are increasingly upset over the nation's budget deficit, and proposed cuts in domestic programs. In a Pentagon briefing on Monday, Defense Secretary Donald Rumsfeld defended that aspect of the budget plan. The threat posed by large armies, he said, has not gone away.

"And the kinds of capabilities that are necessary to continue to see that they are deterred and dissuaded require investment," Rumsfeld said.

Homeland Security Spending on the Rise 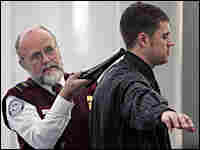 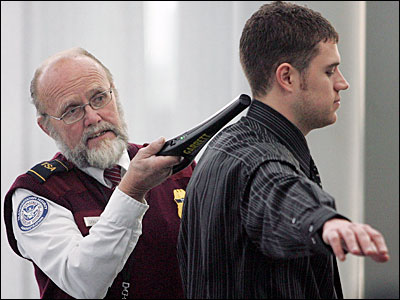 The Homeland Security budget calls for $4.7 billion to fund aviation security programs run by the Transportation Security Administration, such as airport security screening.

The department's budget calls for more money to strengthen border and aviation security. Among other things, it would provide 6,700 more immigration detention beds and 1,500 more border patrol agents. The budget also includes a 10 percent increase in funding for the Federal Emergency Management Agency, which was criticized for its response to Hurricane Katrina. This includes a tripling -- to $150 million -- in grants for pre-disaster mitigation efforts, to reduce potential damage from disasters.

The budget also attempts to focus more of the government's homeland security spending on what are believed to be the greatest threats. The department would increase funding for state and local grant programs that target high-risk areas and facilities, and eliminates some other, broader grant programs. Overall, the budget would cut homeland assistance to state and local governments by $602 million.

The president also calls for $10 million to fund a new office to oversee chemical site security. And he would give the Coast Guard a role in providing air security around the nation’s capital.

The Homeland Security budget also calls for $4.7 billion to fund aviation security programs run by the Transportation Security Administration. It would help pay for those programs by increasing the security fee on airline tickets from the current $2.50 to $5.00 for a one-way ticket. Congress has rejected a similar fee increase in the past, and the proposal is expected to meet with opposition again on Capitol Hill. 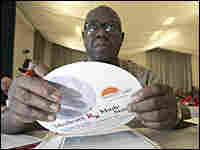 Senior Leon Washington looks at a prescription drug chart during a Medicare enrollment event in Pleasanton, Calif., in December 2005. The budget proposes $35.9 billion in spending reductions for Medicare over the next five years. Justin Sullivan/Getty Images hide caption 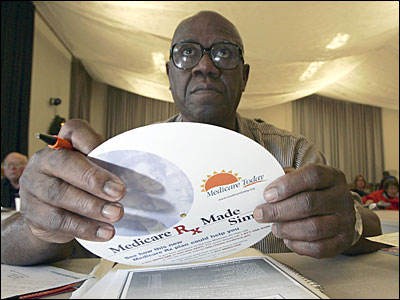 Senior Leon Washington looks at a prescription drug chart during a Medicare enrollment event in Pleasanton, Calif., in December 2005. The budget proposes $35.9 billion in spending reductions for Medicare over the next five years.

President Bush's FY2007 budget would not only cut funding for a broad array of health programs, it could also fundamentally change the way the Medicare program for the elderly and disabled is funded.

Funding for so-called "discretionary" health programs would be largely frozen -- as for the $28 billion National Institutes of Health -- or reduced. The Centers for Disease Control and Prevention, for example, would see a $367 million reduction, to $5.8 billion; funding for the Health Resources and Services Administration would drop $252 million, to $6.3 billion.

Continuing a theme from last year, the budget proposes to terminate several smaller health programs, including one that helps fund training for primary care doctors and other health professionals, and the Health Community Access Program that links community health centers and public hospitals.

On the "entitlement" funding front, the budget proposes an additional $12 billion over five years in spending reductions for the Medicaid health program for the poor, whose funding is shared between the federal government and the states. Most of those reductions would come through cracking down on some state financing techniques that federal officials say allow states to pay less then they should.

But the biggest changes would come to the $350 billion Medicare program. The budget proposes $35.9 billion in spending reductions over the next five years, largely by reducing payments to hospitals, nursing homes, and some other health care providers.

A potentially far-reaching shift would in effect cap the amount of federal tax revenue that flows to Medicare. Currently the program is funded from three separate sources -- payroll taxes, beneficiary premiums, and general tax revenues. If the latter were to grow beyond 45 percent of total Medicare spending, under the proposal, Congress would either have to act to limit spending to that amount, or an across-the-board reduction of 0.1 percent would be applied to all Medicare spending.

The president's 2007 budget calls for $3.5 billion in Department of Education cuts. That's nearly a 4 percent decrease in funding compared to last year. Forty-two education programs are targeted for elimination. The biggest include arts education, vocational education, parent resource centers, the drug-free schools program and education technology grants. (Discretionary spending on education would drop from $57.5 billion to $54.4 billion -- a drop of $3.1 billion, or 5.5 percent, from a year ago).

In a briefing with reporters Monday, Education Secretary Margaret Spellings began by saying that education has gotten the largest percentage increases of any domestic, non-security agency since 2001, when President Bush took office.

That's true. Federal funding for education has gone up about 40 percent since 2001. But in the last two budgets (including 2007), education funding has been flat or it has been reduced. This comes at a time when the No Child Left Behind Act is forcing states to spend a lot more money on testing, teacher training and school improvement to meet the law's mandates.

The only new initiative in the president's 2007 budget is an additional $380 million for math and science education. That's a 51 percent increase in spending for these types of programs. Most of that $380 million would be used to significantly expand advanced science and math instruction by re-training 70,000 teachers over five years. Although 132,000 high school teachers today teach at least one advanced, college-credit course, only a quarter (33,664) are trained to teach advanced math and science. The president wants to double that number.

The budget includes money for the creation of a "teacher corps" made up of 30,000 mathematicians and scientists in government or the private sector to become adjunct high school teachers. And finally, there's new money for programs that target low-income students who are struggling in math and science.

It's another lean year for environmental programs. The president proposed cutting spending for the Environmental Protection Agency by more than $300 million, or 4 percent.

The biggest cuts would come out of the program designed to help states and communities update aging sewer systems. This program is important because the crumbling sewer systems allow hundreds of billions of gallons of raw sewage to leak into rivers, lakes and bays every year. The President's request is $200 million below the 2006 budget and $600 million below the funding level from a few years ago.

The officials charged with cleaning up air pollution in states and cities were steamed about a cut of $35 million, or 16 percent, in the funding they receive from the federal government to help them meet federally mandated air quality standards. They said the cuts would be coming at a particularly bad time because states are struggling to meet new stricter air quality standards set by the federal government.

The president did propose spending $50 million on a voluntary program to provide grant money for retrofitting old diesel engines used on a variety of vehicles, including school buses and equipment used in agriculture and at ports.

Likewise, the president's budget request for the Interior Department is $400 million less than the 2006 funding level, or a cut of almost 4 percent. The National Parks Service would take the biggest cut, about $100 million. Most of that money comes from the construction funds that are used for restoring, repairing or replacing facilities at National Parks, such as visitor centers and campgrounds.

That's the Bush Administration's message to the scientific community in this year's budget request. It calls for adding nearly $1 billion to spending on basic research in the "physical sciences" such as chemistry and physics. But other fields -- such as biomedical and environmental studies -- would see spending stagnate or decline. And that has some politically powerful researchers ready to rumble.

The Bush plan -- dubbed the American Competitiveness Initiative (ACI) -- calls for science spending to grow significantly at three civilian science agencies. The National Science Foundation, which mostly makes grants to university scientists, would get a 7.8 percent increase to $6 billion. The Department of Energy's science programs, which fund things like giant atom smashers and lasers, would get a 14 percent bump to $4.1 billion. And core science programs at the National Institute for Standards and Technology, which does fundamental studies and helps industry develop new technologies, would get an 18 percent boost to $467 million. The White House argues that these investments -- the down payment on a $136 billion, 10-year plan -- will eventually produce new technologies and products that will strengthen the U.S. economy.

That idea has drawn applause from physical scientists, who for years have been making the same argument themselves. Now, they're hoping to convince Congress -- which controls the purse strings -- to go along.

But not all researchers are pleased by the White House plan. Some note that some of the "new" money has been diverted from existing programs or created by accounting tricks. And skeptics note that the budget proposal calls for spending at nearly all other civilian science programs to stagnate or decline. Spending at the National Institutes of Health, for instance, would stay flat at about $28 billion. And that won't sit well with politically powerful patient groups, who say biomedical research is a matter of life and death, and deserves to share in any new wealth. Look for Congress to come up with its own "political science" for remaking the federal research and development budget.