Accessibility links
Haitians Flock to Vote in National Elections Haitians jam polling stations as U.N. peacekeepers guard the country's first presidential election in nearly six years. Voting day got off to a rough start, creating havoc in many voting centers around the capital city. But election officials assured voters they would be able to cast their ballots.

Haitians jam polling stations as U.N. peacekeepers guard the country's first presidential election in nearly six years. Voting day got off to a rough start, creating havoc in many voting centers around the capital city. But election officials assured voters they would be able to cast their ballots. 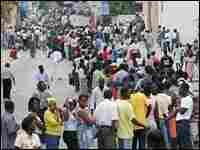 People wait in line to vote in Port-au-Prince. Most polling centers opened late and many voters were misdirected to the wrong polling places. Jean-Cyril Pressoir hide caption 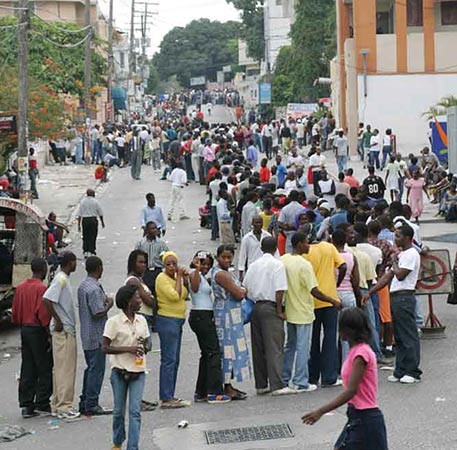 People wait in line to vote in Port-au-Prince. Most polling centers opened late and many voters were misdirected to the wrong polling places.

Haitians went to the polls today in the first national election since former President Jean-Bertrand Aristide fled the country nearly two years ago. Voting got off to a rough start. There was havoc in many voting centers around the capital city. But election officials assured people they would be able to cast their ballots. From Port-au Prince, Amelia Shaw reports.

Lionel Victor says he left his home in Cite Soleil at four AM to walk the two miles to his designated polling station in Delma. He's among thousands of people standing in line in the dreary midmorning heat of Port-au-Prince.

SHAW: I've been here since 4:30 in the morning. I know they are in there, he says, referring to election workers. But they won't let us in. It's 9:30, and we need to vote. The polls were supposed to open at six AM, but many voting stations in the capital did not open until hours later. They were hampered by a shortage of workers, missing ballots, and other problems. Rico Pierre is an election worker in charge of the voting booth in lower Delma. He says there was little he could do.

Mr. RICO PIERRE (Haitian Election Worker) (Through Translator): We got here at five in the morning, but we didn't have electricity or any tables and chairs. And now the voters have invaded our space, it is impossible to set anything up.

SHAW: The polling booth is full of angry people waving their identity cards in the air. Nearby a group of young men chanted in support of Presidential Candidate Renee Praval.

SHAW: Praval is number one. Praval he's our hope.

SHAW: Out of 33 presidential candidates, Praval is the front-runner of the race. The former president was a protégé of Aristide, who continues to have large support from slum residents. However if no candidate wins 50 percent of the votes, a runoff election will be held next month. The winner will replace the U.S.-backed interim government led by Prime Minister Gerard Latortue.

Security at the polls was overseen by Haitian police as well as 9,000 UN peacekeepers who have been deployed in Haiti since 2004. However, scuffles and stampedes erupted at some polling stations.

SHAW: On Delma 30(ph), more than a thousand people lined the street, cramming themselves against the gate of the polling center. When a security guard tried to let an election worker through, the voters broke down the gate and stormed inside.

Haitian security officers shot tear gas into the air to disburse the crowd. Local press reports said at least two people were killed in the capital after being crushed in stampedes. In one rural town, police shot into a stampeding crowd killing one and wounding four. Overall, however, voters formed orderly lines and patiently waited to cast ballots. The President of Haiti's Provisional Electoral Council, Max Mathurin, has issued a statement urging calm and assuring voters they would all get to cast their ballots.

SHAW: More than 3.5 million people have registered to vote. Outside a polling station in the wealthy suburb of Petionville, Zephyr Watson(ph) shows his thumb which was dipped in blue ink when he voted half an hour before.

Mr. ZEPHYR WATSON (Haitian Voter): (Through Translator) People are doing their best. Nothing is perfect. Even if I had to go to two different polling stations, and wait five hours, I'm happy. I voted.

SHAW: But next to him Louis Renaud(ph) shrugs his shoulders. He says they couldn't find his name in the voter registry.

SHAW: I wanted to vote, he said, but it looks like I can't. So I'm just going home. Ballots will be collected at the end of today's vote and transported to the capital by helicopter or by mule over Haiti's mountain roads. Results aren't anticipated before Friday. For NPR News, I'm Amelia Shaw in Port-au-Prince.