Accessibility links
How Turin Got the Games A backlash against a Swiss Olympic official's accusations about bribery in the Olympic host-city selection process helped Turin, Italy, win the 2006 Winter Games.

How Turin Got the Games

How Turin Got the Games 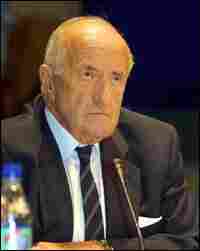 Six months before it was named host of the 2006 Winter Olympics, Turin, Italy, was NOT considered the favored bidding city. Bets were on Sion, Switzerland, a picturesque mountain town with plenty of winter sports experience. Switzerland hadn't hosted the Winter Games in 50 years and its biggest cheerleader was Marc Hodler, one of the most senior and powerful members of the International Olympic Committee, and president of the International Ski Federation.

"Sion made better sense," recalls Ed Hula, editor of AroundTheRings.com, who has focused on Olympic politics and business since 1992. "Everyone was asking, 'Why is Turin bidding?'"

"Turin was viewed as an industrial city with no winter sports tradition," Hula explains. "The proposed mountain venues were far away." The IOC, Hula adds, liked the alpine village concept that seemed to work for the Nagano Olympics in Japan in 1998. Sion seemed more like that than Turin.

Turin was in the running because it had the Agnelli family backing its bid. The Agnellis founded Turin-based Fiat and were major players in Olympic winter sports. They faced an uphill battle in the Olympic bidding and that worried Marc Hodler, Sion's well-placed benefactor. He had heard a rumor that Turin bidders were going to woo IOC members by giving them Ferraris, which were built by a Fiat subsidiary.

Hodler had long been concerned about corruption in the Olympic bidding process. He wrote the rules that governed the behavior of bidding cities and he was frustrated with the IOC's dismissive response to reports of bidding cities showering IOC members with lavish gifts, entertainment and trips, college scholarships for their children and other purported attempts to buy the votes of IOC members. The IOC said it would respond to documented proof, not rumors.

Documentation came late in 1998, when organizers of the 2002 Salt Lake City Games acknowledged that they had paid for college scholarships for the children of IOC members before Salt Lake was named an Olympic host city. NPR presented that admission to Hodler in a late-night phone call to Switzerland. "That is not legitimate." Hodler told me. "They are not allowed to pay for that." The payments, he added, "helped Salt Lake City get the votes they needed to win."

Hodler kept talking long after our interview was over. He dominated an IOC meeting a few days later at IOC headquarters in Lausanne, Switzerland, making increasingly dramatic accusations. At one point, he mentioned the rumor about Turin, the Agnelli family and cars for IOC members. "His rantings blew the lid off the way the IOC vote process went," Hula says. Hodler's comments also triggered a major IOC scandal, which forced expulsions and resignations, reform of the bidding process and criminal investigations of high-ranking Olympic officials. "True or not," Hula adds, "IOC members did not appreciate Hodler's accusations."

Some suspected Hodler of using Salt Lake City's excesses to bolster Sion's bid. Making a stink about corruption, the thinking went, would keep the Agnellis from trying to buy the Olympics for Turin, as the unsubstantiated rumor suggested.

In response to the scandal, the IOC tried to make sure that wasn't possible. IOC members were forbidden from visiting bidding cities. A small evaluation commission took much of the selection process away from rank and file members, narrowing the candidate cities to two: Turin and Sion.

Before the scandal, Hodler had been a sympathetic figure, as well as an influential IOC member. He was 80 at the time and at the end of a long career in winter sports. His leadership at the helm of the International Ski Federation won him support.

All that seemed to evaporate as IOC members gathered in Seoul, South Korea, in June 1999, to grapple with the scandal and choose the 2006 host city. The vote wasn't even close: Turin 53, Sion 36.

Turin bid official Marco San Pietro told reporters at the time, "I think for the Swiss bid, it would have been better if Mr. Hodler hadn't made his allegation."

And Hodler himself said this, according to Mike Gorrell of The Salt Lake Tribune: "They say that somebody must be at fault, that somebody has to be blamed. I take the blame."