Accessibility links
Haiti Concludes Turbulent Presidential Election Polling stations in Haiti stayed open into the night for the country's first presidential election since Jean-Bertrand Aristide was ousted two years ago. There were some violent incidents and a few deaths were reported, but the balloting was largely free from the widespread violence so many had feared.

Polling stations in Haiti stayed open into the night for the country's first presidential election since Jean-Bertrand Aristide was ousted two years ago. There were some violent incidents and a few deaths were reported, but the balloting was largely free from the widespread violence so many had feared. 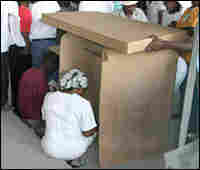 Polling stations in Haiti stayed open into the night for the country's first presidential election in the two years since Jean-Bertrand Aristide was ousted. There were some violent incidents and a few deaths were reported, but the balloting was largely free from the widespread violence so many had feared. The vote was monitored by international observers who will give their verdict on whether the election was free and fair. NPR's Corey Flintoff visited polling places in Haiti's capital, Port-au-Prince, and he joins me now.

Corey, where did you go, and what did you see?

Well, Renee, we visited a number of polling places around the city, from some very upscale neighborhoods to one that was just outside the big slum called Cité Soleil. And that's where we saw some things that definitely wouldn't pass muster in the United States. For one thing, polling stations opened quite late, and that may have just discouraged some people from voting. Polls were supposed to open at about six in the morning, and many of them were delayed for anywhere from two to four hours.

The head of the European Unions Observer Mission, Johan Van Hecke, he's a Belgian, told us that part of the problem with this particular polling station was that it had no electricity, and the election workers were unable to get set up in the dark. He said also that the workers were simply overwhelmed by the sheer number of people who showed up so early.

One big problem I saw was that there was no plan for crowd control, so people were packed into a big, sort of unfinished concrete building. There were no lines. People were forced to try to line themselves up, and there was a lot of pushing and shoving, and after waiting for hours, they might get to the head of the line and find that their name weren't on the list. The crowds also meant that there was no place where people could secretly mark their ballots. I mean, we could clearly see how people were voting from where we stood. And we met at least one election worker who was openly partisan. He was a young man who was watching the ballot boxes and said he was counting on the victory of former president Rene Preval.

MONTAGNE: Remind us just briefly why Cité Soleil would be so important? And I also happen to gather that folks there had complained about the location of their polling places right from the beginning. They were worried.

FLINTOFF: Yes, they did. Cité Soleil is controlled by armed gangs, or that is the U.N. and the Haitian authorities call them gangs. They call themselves political militants who supported former President Jean-Bertrand Aristide. The U.N. military force said it couldn't guarantee the security of polling places inside the area. So, the Election Commission established six polling places just outside the boundaries of Cité Soleil.

It wasn't so much an issue of distance, because the polling places, they were all within reasonable walking distance. But people in the area said they were afraid of being arrested or harassed by police if they went outside to vote.

MONTAGNE: And have those international observers made any comment so far?

FLINTOFF: Well, not much, frankly. I mean, they're sort of holding their fire until they've had a chance to see what's going on. I told Johan Van Hecke what I'd seen, and he was pretty non-committal about it. He said, basically, the observers would all have to compare notes to decide whether the election was credible.

MONTAGNE: Finally, is there hope at this point that this election may be the beginning of a peaceful transition in Haiti?

FLINTOFF: I would say, yes. Given the delays, and given the just enormous difficulties, and given the fact that there was no major violence, I think people would tell you that it went almost as well as they could have hoped. You know, most people that I've talked with said they believe that a clean, credible election is the only way for this country to start over.