Accessibility links
Grammy Winners: You Heard Them on NPR All year long, NPR features the best of contemporary music with interviews, performances and profiles. In celebration of the 48th Grammy Awards, a look at selected winners who were featured in the past year on NPR shows.

Grammy Winners: You Heard Them on NPR

Grammy Winners: You Heard Them on NPR

Grammy was especially kind to Kanye West, U2, Alison Krauss and Kelly Clarkson Wednesday night. Comeback kid Mariah Carey didn't go home empty-handed, but she might have been a tad disappointed. Recent NPR coverage has featured a broad variety of Wednesday night's award winners through interviews, reviews and performances. Here are some highlights of past coverage of selected stars: 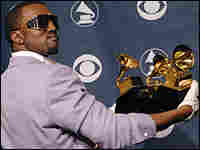 Get Behind Me Satan by The White Stripes

Cost Of Living by Delbert McClinton

Lonely Runs Both Ways by Alison Krauss And Union Station

The Company We Keep by The Del McCoury Band

The Way Up by Pat Metheny Group

"From The Bottom Of My Heart" by Stevie Wonder, from the album A Time To Love

Best Pop Collaboration With Vocals (For a collaborative performance, with vocals, by artists who do not normally perform together. Singles or Tracks only.)

Toure and Diabate on 'All Songs Considered'

Tony Bennett, The Art of Romance

Jimmy Sturr and His Orchestra, Shake, Rattle and Polka!

A Conversation with Burt Bacharach Jan. 7, 2006

Burt Bacharach, At This Time

ALL the Winners at Grammy.com