Accessibility links
Security Tight Ahead of Olympics Opening in Turin The 20th Winter Olympics opens Friday in the Italian city of Turin. Over the next two weeks, 2,600 athletes will be competing before 1 million spectators. First lady Laura Bush will attend the opening ceremony, along with numerous other international dignitaries.

Listen
Security Tight Ahead of Olympics Opening in Turin

The 20th Winter Olympics opens Friday in the Italian city of Turin. Over the next two weeks, 2,600 athletes will be competing before 1 million spectators. First lady Laura Bush will attend the opening ceremony, along with numerous other international dignitaries. 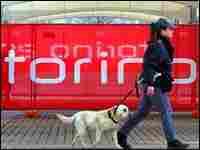 An Italian police officer and a security dog patrol at the main press center of the 2006 Winter Olympic Games in Turin, Feb. 9, 2006. Reuters hide caption 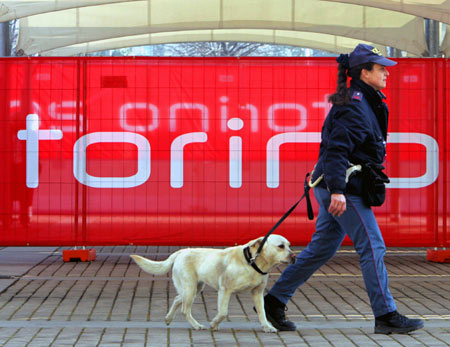 An Italian police officer and a security dog patrol at the main press center of the 2006 Winter Olympic Games in Turin, Feb. 9, 2006.

The 20th Winter Olympics opens today in the Italian city of Turin. Over the next two weeks 2,600 athletes will be competing before one million spectators. First Lady Laura Bush will attend the opening ceremony along with other international dignitaries. Security is extremely tight.

The official slogan of these Olympics is Passion Lives Here, but up to the eve of the games the traditionally reserved people of Turin showed little excitement.

Mayor SERGIO CHIAMPARINO (Turin, Italy): Yes, also the last minute works are completing. I am glad. All is running according to timetable. And also, let me say that Olympic spirit is raising, is growing up, particularly in the last week. This is very important also for the city.

POGGIOLI: One of Turin's busiest nerve centers is the special committee set up to coordinate security. Deputy Director Roberto Massucci said that more than 10,000 police officers and special units have joined 1,500 local law enforcement agents to protect the games.

NATO surveillance planes will patrol the skies while the Turin airport will be shut down all day today. The games will be spread out over a very large area, stretching from the city to the mountains close to the French border, posing considerable security challenges. Specially trained Alpine military units patrol the slopes.

Massucci said that intelligence gathered so far suggests the major threat to the games will not come from international terrorist groups but from local anarchists and anti-global activists. He explained what's expected.

Mr. ROBERTO MASSUCCI (Olympics Security Official): Action able to attract the visibility of the media, of the international community. And so I mean not so violent, but able to disturb the games, the torch, or the opening ceremony.

POGGIOLI: And, some other officials say, likely to sow panic among visitors, athletes, and visiting dignitaries.

In the afternoon, a thousand or so people lined the streets around a large square before the arrival of Olympic torch bearers.

A group of schoolchildren waving Olympic flags eagerly waited for an event one of them said happens only once in a lifetime.

But nearby, a motley group of protestors had set up loudspeakers and distributed flyers. A t-shirt for sale proclaimed, Dirty Olympics, evictions, layoffs, and real estate speculation. A poster denounced Olympic sponsor Coca Cola's business practices.

Mr. FREDERICKO ALTO (Student): We like sports. But let's say we don't think it's the real spirits of Olympic Games, the ones we are seeing on television. It's all about business, and it's all about making money for a few people.

POGGIOLI: On the other side of the street, a large phalanx of anti-riot police move toward the demonstrators in an attempt to prevent them from blocking the street. But as traffic backed up and hundreds of reporters flurried about, organizers decided not to risk a confrontation and changed the torch route.

The demonstrators were exuberant. One of them announced a victory. We have been successful, he said, the torch cannot pass by here. But suddenly a crowd of disappointed spectators, young and old, unleashed a verbal assault on the anti- Olympic protesters.

POGGIOLI: Catala Martina yelled, You are anti-democratic. We came here to see the torch-bearers. Shame on you for blocking an event that is a festival for Turin. He said, You're a bunch of fascists, discrediting this city and this country.

A little later, a few streets away, the torch bearers made their way through Turin, not running in the street but inside a van, protected from possible attack.