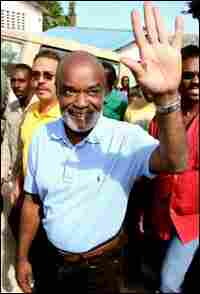 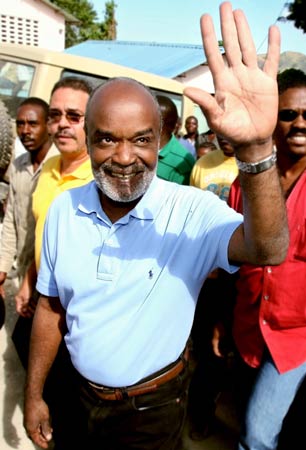 In Haiti, preliminary results from its presidential election show former President Rene Preval with a substantial lead. The results come out on the same day that international election observers sharply criticized Haitian election officials for poor organization, but said the vote generally appeared to be free and fair.

MONTAGNE: So Corey, is Rene Preval going to be the next president when the final count is in?

FLINTOFF: You know, it's hard to tell. There really aren't enough official results yet, but there are indications. Last night the election commission came out with a few scattered figures from different parts of the country, without saying what percent of the votes cast they were talking about, and in that case, in that sample, Rene Preval got more than 61% of the vote. Former President Leslie Manigat came in with 13%, and Charles Baker, who is a businessman, was in third place, and he had about 6%.

But those numbers do match some unofficial results I've seen who were put together by people who went from polling place to polling place and compiled just the results of figures that were posted on the walls there. And those figures show that at least here in the capital Preval may actually have a strong enough lead to win in the first round, in the winner runoff.

MONTAGNE: Put this all...

FLINTOFF: And that would be important.

MONTAGNE: And yet, great, put this all in context for us. Why would this be important? What would it mean for Haiti? What does it say as regards Haiti's future?

FLINTOFF: Well, one thing is that, I've heard analysts say that Preval might have had a harder time winning in a second round because all his rivals could've thrown their support behind a single opposition candidate.

It's surprised a lot of people that he was, seems to be strong enough to come in, you know, in the first round victory. And its apparently because he had a lot of support because of his links to President Jean-Bertrand Aristide, in some of the poorer areas of Port-au-Prince.

MONTAGNE: And if he is indeed elected, finally, does that mean a return of Aristide's influence? And if that were the case, what does that mean?

FLINTOFF: Well, Preval has distanced himself from Aristide. He, you know, of course Aristide was beloved by Haiti's poor, but he was despised by people in the business and the upper classes, who said that he was corrupt and that he was moving the country toward a dictatorship. Preval didn't run as a candidate from Aristide's Lavalas party. He ran on his own ticket, it's called L'Espwa, which is the Creole word for hope.

And while he said there's nothing legally to prevent Aristide from returning from exile in South Africa, he also said that Aristide could face legal action if he comes back. And it's worth noting that Aristide never endorsed Preval's candidacy from his end either.

MONTAGNE: And I gather that election observers were pretty scathing about how the election was organized, even though they're recognizing it as a, sort of a legitimate election.

FLINTOFF: Yes, the European Union observers particularly faulted the Haitian Provisional Election Commission, first for the overall administration of the election. We saw a lot of problems on Tuesday when the voting started late, but the main thing that the election observers had to say was that the Haitian voters themselves were extraordinarily patient and determined. And they got through Voting Day with almost no violence.

MONTAGNE: Corey, thanks very much.