Accessibility links
Timeline: Who Knew When the Levees Broke A timeline released by congressional investigators shows 28 reports of levee failures the day Katrina made landfall in New Orleans. Top officials -- including those at the White House -- say they learned of the failures the following day.

Timeline: Who Knew When the Levees Broke

Timeline: Who Knew When the Levees Broke 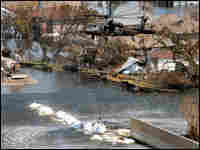 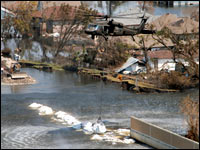 A Texas Army National Guard helicopter deposits a 6,000 pound-plus bag of sand and gravel to try to close the breach in the 17th Street Canal, Sept. 4, 2005.

New Orleans residents are evacuated from their homes by a FEMA search and rescue team, Aug. 31, 2005. Photo by Jocelyn Augustino/FEMA hide caption

A timeline released by a Senate investigative panel shows 28 reports of levee failures the day Katrina made landfall in New Orleans. The information is at odds with contentions from Bush administration officials who say they didn't learn about the levee failures until the following day.

8:30 a.m.: FEMA's regional office is informed that "a twenty-foot tidal surge… came up and breached the levee system in the canal."

9:08 a.m.: A brief from the Transportation Security Administration notes that the Industrial Canal levee has been breached. "There is heavy street flooding throughout Orleans, St. Bernard, and Jefferson parishes," the brief notes. A senior watch officer at the Homeland Security Operations Center receives the brief at 11:41 a.m.

9:14 a.m.: A flash flood warning from the National Weather service notes: "A levee breach occurred along the Industrial Canal… 3-8 feet of water is expected."

10 a.m.: Department of Homeland Security adviser Louis Dabdoub sends an e-mail to officials at Homeland Security and its main operation center. It reads: "It is getting bad. Major flooding in some parts of the city. People are calling in for rescue… The bad part has not hit here yet."

11:51 a.m.: Heath sends an e-mail to Michael Lowder, FEMA's deputy directory of response, informing him that the 17th Street Canal has been breached, as reported by Marty Bahamonde, a FEMA official on the ground in New Orleans. Brown responds: "I'm being told here water over not a breach."

12 p.m.- 5 p.m.: Levee breaches are reported by, among others, the Louisiana State Police, the National Weather Service, the Army Corps of Engineers and the Louisiana Office of Homeland Security.

6 p.m.: A report from the Homeland Security Operation Center says: "Preliminary reports indicate the levees in New Orleans have not been breached."

6:08 p.m. The American Red Cross e-mails officials at the White House and Department of Homeland Security about reports of levee breaches and "extensive flooding" in the Lower Ninth Ward and St. Bernard Parish.

9 p.m.: Appearing on CNN, then-FEMA Chief Michael Brown says: "We have some, I'm not going to call them breaches, but we have some areas where the lake and the rivers are continuing to spill over."

9:29 p.m.: John Wood, chief of staff for Homeland Security Secretary Michael Chertoff, is sent an e-mail that reads in part: "the first (unconfirmed) reports they are getting from aerial surveys in New Orleans are far more serious than media reports are currently reflecting."

10:30 p.m.: A Homeland Security situation report reads: "There is a quarter-mile [breach] in the levee near the 17th Street Canal… an estimated 2/3 to 75% of the city is under water… a few bodies were seen floating in the water." This report reaches the White House around midnight, according to congressional investigators.

11:05 p.m.: Michael Jackson, deputy secretary of Homeland Security, is sent an e-mail summarizing reports of the extensive flooding that followed the collapse of the 17th Street Canal levee. The reports had been submitted by Marty Bahamonde, a FEMA official on the scene, beginning at 10:12 a.m. that day.

6 a.m.: A Homeland Security situation report states that the Industrial Canal and 17th Street Canal levees have been breached. It says: "Much of downtown and east New Orleans is underwater, depth unknown at this time… Widespread and significant flooding has occurred throughout the city."