The Olympic cauldron is lit, signaling the start of the 2006 Winter Games in Turin, Italy. Competition officially begins Saturday. This year's games are under an intense international security plan to monitor possible terrorist threats. 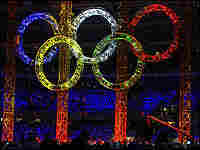 A view of the Olympic rings during the opening ceremony of the 2006 Winter Olympics at the 35,000-seater Stadio Olimpico in Turin, Feb. 10. Odd Andersen/AFP/Getty Images hide caption

And I'm Michele Norris. The 20th Winter Olympics opened in the Italian city of Turin today, with a spectacle of dance, music, art and fashion. The opening ceremony celebrated athletic prowess as well as Italian history and culture. First Lady Laura Bush was on hand, along with hundreds of other international dignitaries. Security was extremely tight. There's been concern in Italy about possible disruptions by local anarchists and anti-globalization groups. NPR's Sylvia Poggioli is on the line with us from Turin. So, Sylvia, describe today's opening ceremony. It sounds like quite an extravaganza.

Oh, my God. There was classical ballet. There were waltzes, hip hop, as well as martial arts, acrobats, gymnasts and aerial dancers hanging from large balloons. There was a section dedicated to Italian flag-waving, with the wavers in full medieval costumes. One section evoked the artistic masterpieces of the Renaissance. In another, there were baroque fireworks. And throughout, there were many hints of the bizarre and surreal so dear to film director Federico Fellini.

The official Olympic motto, Faster, Higher, Stronger, was evoked in the five huge rings that rose up into the sky, each more than 21 feet in diameter, rising more than 50 feet above the stage floor, with gymnasts twisting and hanging from them. And then in the middle of the ceremony, the athletes, 2,500 of them, marched into the stadium to the beat of American dance music, and then they sat in the middle of the stage, apparently a first for an Olympic opening ceremony, and they were surrounded by a literal cast of thousands.

There was something for everyone. Peter Gabriel sang John Lennon's song Imagine. Actresses Sophia Loren and Susan Sarandon were among the eight women carrying the Olympic flag while the march from Verdi's opera Aida played in the background.

NORRIS: So I guess when the athletes walked into the Olympic Village, they played Village People. The song YMCA took on a different meaning there.

NORRIS: Through all this, was there any kind of central theme?

POGGIOLI: Well, the main theme was passion, in particular Italian passion, for sports, for art and for music. And the spectacle was a showcase of Italian history and culture. The director said the main motif was the values of the Renaissance and its concept of humanism, the human being at the center of all things. Recurring figures in the two and a half hour spectacle were what were described as sparks of passion, speed skaters in red costumes, with flames shooting out of the back of their helmets. These skaters symbolized speed and evoked futurism, the Italian avant-garde movement of the 1930s.

There were other literary touches, for instance, a canto from Dante's Divine Comedy, and Ulysses, the symbol of man's unquenchable thirst for knowledge and discovery. And, this being Italy, there was also high fashion, costumes by designers Giorgio Armani and Moschino, tributes to Italian cuisine, and even a Testarossa flaming red Ferrari racecar screeching across the stage. One of the more comical moments, unintended, I'm sure, were the dancers in white latex jumpsuits with big bubbles stuck to their heads, and they were meant to be snowballs, but they reminded me of Woody Allen as a sperm in the movie Everything You Wanted to Know About Sex But Were Afraid to Ask.

NORRIS: Now, Sylvia, there's always a lot of secrecy about who finally lights the Olympic cauldron. Who was it this evening?

POGGIOLI: Well, there had been a lot of speculation that it would be Italian Olympic hero Alberto Tomba, and in fact he did bring the flame into the stadium, but at the end it was Italian former cross-country skier Stefania Belmondo that lit the flame.

NORRIS: That was NPR's Sylvia Poggioli, at the Winter Games in Turin, Italy.