Accessibility links
'Missa Solemnis,' a Divine Bit of Beethoven The Catholic mass Beethoven called Missa Solemnis is rarely performed. But considered in partnership with the much more famous Ninth Symphony, it sheds light on the composer's spiritual view.

Is the Ninth Symphony a response to the 'Missa Solemnis?' Compare and contrast:

Choral Excerpt from 'Ode to Joy' in Ninth Symphony

Instrumental Passage from 'Ode to Joy' from Ninth Symphony

One of only a few contemporary portraits of Beethoven is prepared for auction at Sotheby's in London in 1996. Johnny Eggitt/AFP/Getty Images hide caption 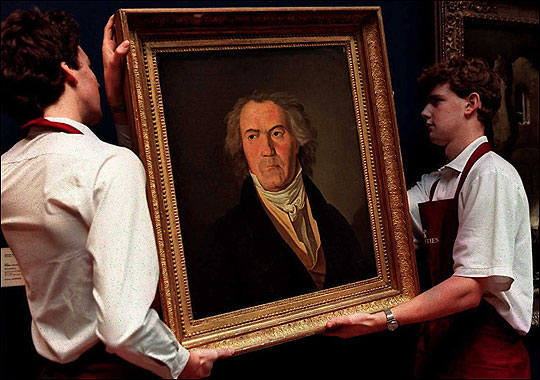 One of only a few contemporary portraits of Beethoven is prepared for auction at Sotheby's in London in 1996.

The Catholic mass which Beethoven called the Missa Solemnis is rarely performed. It's eclipsed by the better-known Ninth Symphony. But taken together, the two works shed light on the composer's spiritual world view.

The Missa Solemnis may be the greatest piece never heard. Nearly 90 minutes long, it requires a large chorus, an orchestra and four soloists. It's impractical for the concert hall and fits far less comfortably into a Catholic church service.

It concludes with a fraught, fragile and unanswered plea for peace amid the drumbeats of war. But the answer comes in the Ninth Symphony, with its chorale finale based on Schiller's "Ode to Joy," written in a time of revolution.

Those words and Beethoven's music call for humankind to kneel before the creator, but for answers to turn to one another. The path to peace, he suggests, is bestowed not from above, but from within us and among us, in universal brotherhood.