Accessibility links
Chick Corea, on 'The Ultimate Adventure' Last week, legendary jazz keyboardist Chick Corea released a new album titled The Ultimate Adventure. It features a blend of Corea's signature style from the 1970s with some modern twists. The album was inspired in part by the writings of Scientologist L. Ron Hubbard.

Last week, legendary jazz keyboardist Chick Corea released a new album titled The Ultimate Adventure. It features a blend of Corea's signature style from the 1970s with some modern twists. The album was inspired in part by the writings of Scientologist L. Ron Hubbard. 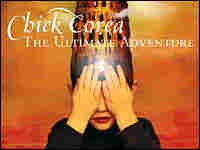 Chick Corea already is considered one of the all-time great keyboardists in modern jazz. So, you'd think at this point in his career, he'd have little to prove, but Chick Corea has just released a new album that many consider to be his most ambitious in years.

MONTAGNE: The album is called The Ultimate Adventure. Music journalist Ashley Kahn spoke with Chick Corea about the CD and about a lifetime in jazz.

Chick Corea is the proverbial kid in the candy store. He's 64 but he still wants it all.

Mr. CHICK COREA (Pianist and Composer): To me life is a great big thing to conquer.

KAHN: Corea is more active and celebrated than ever. Just last month he was named a National Endowment for the Arts Jazz Master. And try to imagine today's jazz scene without the influence of Corea's free-flowing, classically flavored ideas on piano or his always tasteful sound on electronic keyboards. But it's difficult to decide which of his recordings best represents him.

KAHN: Corea recorded Now He Sings, Now He Sobs, his first album as a leader in 1968. That same year, he rose to prominence as a member of Miles Davis's groundbreaking electric jazz group.

KAHN: It was during this period that Corea picked up a book that he credits with changing his life.

Mr. COREA: That was around the time I was with Miles. I came into contact with L. Ron Hubbard's material in 1968 with Dianetics and it kind of opened my mind up and it got me into seeing that my potential for communication was a lot greater than I thought it was.

KAHN: For more than 35 years, Corea has been an active member of the Church of Scientology--a faith that's been associated with celebrities like John Travolta and Tom Cruise. The founder of Scientology was science-fiction writer L. Ron Hubbard.

Mr. COREA: When I would read his fiction, I would get all kind of musical ideas.

KAHN: Corea's new album is called The Ultimate Adventure. It borrows its name from a short story Hubbard wrote in 1939--an updating of the Arabian Nights classic. In the story, Corea heard many of the exotic sounds for his new album, including a lot of Spanish flamenco and a bit of Brazilian samba.

KAHN: Corea chose one tune to explain how he started with the character in Hubbard's story and built a complete musical picture.

Mr. COREA: One good portraiture is the track called Queen Tedmur. She's our hero's romantic interest, so I portrayed her nobility with this song.

Mr. COREA: It was like a combination of a romantic melody but had this strength to it with the rhythm that I used that my Spanish friends have a real name for. They say, oh, that's soliere(ph) and when I described Queen Tedmur to them, the rhythm fit even more.

Mr. COREA: The final capper on it was when Hubert Laws came into the studio to put his flute melody onto Queen Tedmur. He put this lyrical, beautiful touch on it that just completed the portrait.

KAHN: Some critics have found fault saying that The Ultimate Adventure sounds a little too familiar and it's true. In its sound and energy, the album could be called a return to Return to Forever, Corea's well-known group from the 1970s. But revisiting and adding to a past approach is exactly what he intended and the result is an echo of a time when jazz and rock first found a common language.

Chick Corea's new CD is called The Ultimate Adventure. We heard about it from Ashley Kahn, a regular contributor to MORNING EDITION and author of A Love Supreme, the story of John Coltrane's signature album.