Accessibility links
Anna Deavere Smith's 'Letters to a Young Artist' Anna Deavere Smith is renowned for her one-woman shows, which have helped redefine modern theater. In her new book, Letters to a Young Artist: Straight-up Advice on Making a Life in the Arts-for Actors, Performers, Writers, and Artists of Every Kind, she talks about the joy and pain of her peculiar profession.

Anna Deavere Smith is renowned for her one-woman shows, which have helped redefine modern theater. In her new book, Letters to a Young Artist: Straight-up Advice on Making a Life in the Arts-for Actors, Performers, Writers, and Artists of Every Kind, she talks about the joy and pain of her peculiar profession.

Anna Deavere Smith is an actor, playwright, author and teacher. Her unique one woman plays have helped redefine modern theatre. In turn, she's become one of the most celebrated artists of our time. Deavere Smith's latest book, Letters to a Young Artist is written to a fictional teenager named BZ. In it she tries to convey the pain, joy and effort that characterize life in her peculiar profession. Anna Deavere Smith spoke with NPR's Farai Chideya about the book and what it means to interpret the soul.

Your plays are so highly studied in colleges across the country, and I'm sure even internationally, Twilight, Fires in the Mirror. What does it mean for you to teach? And can you teach art?

Ms. ANNA DEAVERE SMITH (Actor, Playwright, Author, Teacher): Yeah. You can't teach talent. You can't teach inspiration. First of all, you can teach technical things. You can teach people critical facilities. You can give them techniques. You can teach discipline. And you can teach them about the business. So, yes, I think there's quite a lot that we can teach. But, you know, I've always been interested in teaching in part because my own work as an actress is a study of human nature. And my own theatre work where I interview people and I perform them, I've been on a journey to understand as much as I can about identity.

And so the classroom is a place where I and my students can learn more about human beings. And so it's been a very important part of what I do for many years now.

Ms. DEAVERE SMITH: A lot of people. You do, Farai.

CHIDEYA: And you also mentioned James Baldwin, who you served while you were a struggling actor?

Ms. DEAVERE SMITH: Right. I served James Baldwin in this place we call the plantation. It really was like a southern plantation. You couldn't go home without picking up all the cornbread crumbs off the floor, and they'd come around with the flashlight, terrible. Anyway, I was serving him. My job as a busgirl was to put down the cornbread and water--people could smoke at the time--and empty ashtrays. And I'll never forget taking ashtrays from his table and being certain that I heard him say, she reminds me of Lorraine.

Now, he could have been talking about anything and anybody. But I thought he was saying, just my presence reminded him of Lorraine Hansberry. And that just kept me going for a whole year, right when I was ready to give up and go to nursing school or something.

CHIDEYA: That is fantastic. What about the sort of random chance of life and how it can motivate you? I'm sure as an artist you have your antennas out all the time for different things that are inspiring.

Ms. DEAVERE SMITH: Right. Well, I wouldn't have been an actress except by a fluke. I went to California really looking for a political revolution. It was over, and I literally fell into an acting class. It turned out to be this incredible place, American Conservatory Theatre, and ended up getting an advanced degree there. So, there's chance. But one of the things I try to put forward in the book is how important it is for BZ to take control of destiny and to plan and to be the author. I'm trying to put across how important it is for us as artists who are itinerant workers really at the whim of everybody else, to nonetheless take some authorship of our own lives.

CHIDEYA: You tackled the whole spectrum of President Clinton's era in one of your plays. Will you ever tackle President Bush?

Ms. DEAVERE SMITH: Probably not. I think I did my stint in Washington. (laughter)

CHIDEYA: Well, before we wrap up, I just want to play off that and ask you about politics in work. You talked about coming to California, looking for the revolution. The revolution was over. How much do you believe that art should be linked to politics and protests, and how much is it important to keep it separate and distinct?

Ms. DEAVERE SMITH: Well, that's a very hard question, Farai, and I have a sense that you probably have a very eloquent answer yourself. I don't think there's a should about it because I understand that creativity is mysterious. I was reading Baudelaire's Painter of Modern Life, and there's this wonderful quote in it which is basically that creativity is childhood recovered at will, childhood recovered at will. And I would say that the artist is a person who is constantly trying to recover that childhood. So that's the business that we are in, I think, is trying to get to the heart of the matter, trying to recover something, no matter how cutting edge we are.

CHIDEYA: You do write in the book about questions being essential to the artist's journey, and that young artists need to learn to question. We are at a point in time where some people don't feel empowered to question. Is that affecting art as much as it is civil discourse?

Ms. DEAVERE SMITH: Yes. And the fact that it's beginning to affect civil discourse to the extent that it is means that I believe we should be encouraging each other, those of us who are artists, and those of us who teach should be, again, not teaching about safety, talking about coming into the world and allowing oneself, as Whitman wanted to be, to both absorbed by America--he wanted to absorb America and have America absorb him.

So to put yourself in that situation, out of the place in the attic--one of the things I ask BZ, is I say, BZ, do you want to be an artist so that the whole world will look at you, or do you want to be an artist because you would like to use your ability to attract attention, to have the world see itself through you differently? It's evermore important that I think the BZ's of the world ask themselves that question, why am I doing this? Is it just to have everybody look at me?

CHIDEYA: Final question. You talk about the importance of having presence as an artist. Now, that makes sense in a lot of ways in terms of acting. But what does it mean to someone like BZ, who is a painter, or to people in other areas of the arts?

Ms. DEAVERE SMITH: Well, in art, I think of many great paintings that have presence, or controversial works, Carol Walker's work; you know, remember when a lot of black people an establishment came forward and said, how could a young black artist like this do things that are derogatory to black people. So that we know that visual artists have always had this ability to come forward and do something that attracts attention and ask questions. I speak in the book about Picasso's Guernica and what that represented, the questions that it was asking.

And then obviously for those of us in the performing arts, presence is this ability really when you're on stage or on screen to have the person in the audience feel that you're right next to them. And so there's this way that as a stranger I think you can close the gap between you and others. And so there's something potentially very uniting about that.

CHIDEYA: Closing the gap between you and others. That's Anna Deavere Smith, actress, playwright; and her latest book is called Letters to a Young Artist. Thanks so much for joining us.

I'm Ed Gordon, this is NEWS AND NOTES. 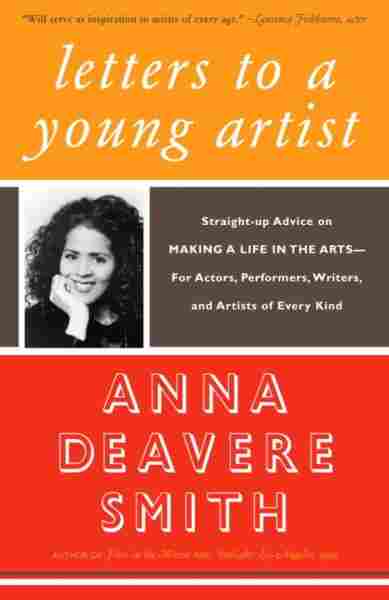 Letters to a Young Artist