Accessibility links
James Hunter and the Return of Analog Soul : World Cafe James Hunter's music harkens back to the days of classic 1950s and early '60s R&B, with infectious vocal and guitar performances, clever songwriting and tight horn arrangements. His latest album, People Gonna Talk, is Hunter's first to be released in America.

Listen
James Hunter and the Return of Analog Soul

James Hunter and the Return of Analog Soul 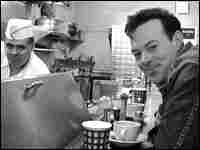 His latest album, People Gonna Talk, is Hunter's first to be released in America. It comes out of the same East London studio that produced the White Stripes' Elephant -- and the same analog authenticity is evident in its sound. The disc is a result of live studio playing -- no headphones, just Hunter and his band.

Born in Colchester, England, Hunter was drawn to the sounds of R&B at an early age. He was discovered on a street corner in Camden Town, London. In 1996, Ace Records released Hunter's solo debut, Believe What I Say, featuring guest appearances by Van Morrison and the late Doris Troy.

In 2001 Boz Boorer, Morrissey's lead guitarist and musical director, stepped in to produce Hunter's sophomore solo album, Kick it Around, on the German label Ruf Records. Recently, GO Records was formed with the sole purpose of recording Hunter's original material.

Hunter has toured extensively with Van Morrison, singing alongside such luminaries as John Lee Hooker, Junior Wells, Jimmy Witherspoon and Georgie Fame. He is featured on Morrison's live album, A Night in San Francisco, as well as on the studio recording Days Like This.