Accessibility links
Hip-Hop Producer, Rapper Jay Dee AKA J Dilla Detriot musician James Yancey — also known as J Dilla and Jay Dee — was one of the music industry's most influential hip-hop artists. But after just a brief career in the spotlight, he died Monday night at age 32 after battling lupus. 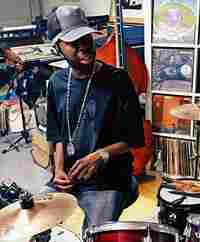 Detroit musician James Yancey -- also known as J Dilla and Jay Dee -- was one of the music industry's most influential hip-hop artists, working for big-name acts like De La Soul, Busta Rhymes and Common. But after just a brief career in the spotlight, he died Friday at age 32 after battling an incurable blood disease and lupus.

The young producer's reputation for bare-bones, "old-school" production and rap styles earned him quick respect in the hip-hop community during the last six years. But his exposure to music came much earlier.

His mother Maureen Yancey, a former opera singer, says her husband was a jazz bassist and their home was filled with music. So it was no surprise when she saw in her son the first signs of a budding disc jockey.

"Dilla's interest in music started at age 2," his mother says. "Dilla carried 45s on his arm and turntables to the park every day, to spin records -- and this was in downtown Detroit."

Yancey got his start working in the studio for A Tribe Called Quest. When his own rap trio Slum Village found a hit with their album Fantastic, Vol. 2, Yancey quickly became one of hip-hop's most sought-after producers.

A year later he put out a solo disc, Welcome 2 Detroit, featuring some of Detroit's underground rap talent. The follow-up album was slated for June.

More on Yancey's Death and How to Donate at StonesThrow.com