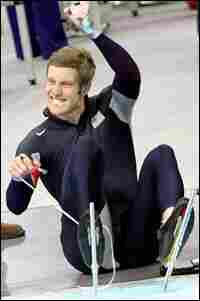 American speed skater Joey Cheek did something very unusual after winning the 500 meter race at the Winter Olympics. He announced he's contributing his $25,000 gold medal award from the U.S. Olympic Committee to refugees from Darfur. And he urged Olympic sponsors to support the same relief effort.