Accessibility links
Last U.S. MASH Unit Handed Over to Pakistan Renee Montagne talks to Rear Admiral Michael LeFever, who is in Pakistan overseeing the handover of the very last MASH unit to the Pakistani government. The mobile medical units, made famous by the military TV comedy M*A*S*H, have now been replaced with smaller, more efficient models.

Renee Montagne talks to Rear Admiral Michael LeFever, who is in Pakistan overseeing the handover of the very last MASH unit to the Pakistani government. The mobile medical units, made famous by the military TV comedy M*A*S*H, have now been replaced with smaller, more efficient models. 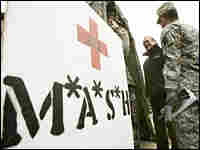 After more than 50 years of patching up broken bodies brought in from the battlefield, the Army's last mobile surgical hospitals, known as MASH, are no more. The last MASH unit was officially handed over today to the government of Pakistan. A U.S. Army medical team has been there since last October, offering care to civilians wounded in the earthquake.

This is the end of a military enterprise that found its way into the popular imagination, through a fictional bunch of medical misfits in a movie, and then in some of the darkest comedy ever to go on TV.

Mr. Gary Burghoff(as a MASH Unit Member Radar O'Reilly): Attention all personnel, triage in the compound. We have the finalists in the shrapnel catching contest.

Mr. ALAN ALDA (as Dr. Captain Benjamin Franklin Hawkeye Pierce): Hi, there. I hope the fact that I'm on the side that shot you won't strain our doctor-patient relationship.

INSKEEP: MASH was set where the real MASH units began, in the Korean War. These many hospitals served in the Vietnam War and the Gulf War. With the Iraq War came smaller, more mobile units that could get right near the battlefield, which has made the MASH units outdated.

MONTAGNE: We turn now to Rear Admiral Michael LeFever on the line from Islamabad, Pakistan, where he's been in charge of handing over the Mobile Army Surgical Hospital, MASH.

MONTAGNE: Fine, thank you. Seems like it might be a bit of a bittersweet day for you and the people in MASH.

MONTAGNE: You know, just to briefly to what MASH has been there in Pakistan. This must have been godsend to the quake victims.

Rear Admiral LEFEVER: It has been. Within weeks of the devastating earthquake, they were on the ground on the 23rd of October, and started seeing patients immediately. And the first line of patients; many of them were victims, treating the wounds, muscle or skeletal wounds from the earthquakes. And over time, transpired to what we see in more primary care. But during that time, saw over 20,000 patients. And at the same time, whereas, out on the outreach program and they ministered over 20,000 vaccinations and immunizations to the people, and to the children of Pakistan.

MONTAGNE: And looking back at the five decades of MASH, we just heard a clip. Alan Alda being a really demented Hawkeye. How does that fit with what you know; Hawkeye Pierce, Hotlips Hoolihan? Were there real, such people in the medical teams?

Rear Admiral LEFEVER: No, it was quite different from that. But what you would admire was, I think, portrayed in the show was incredible work ethic that those wonderful men and women had. And that what it was. Seen there in the center of town at the capitol of the Kashimiri Providence areas, where we've never been in before. Helicopters landing on fields outside, ambulances going out and picking up casualties, taking them to the emergency room where they're evaluated, resuscitated, and taken into the operating room.

And in the early days, we worked on 16 hours of surgery a day in our two operating rooms. That the MASH provides the pharmacy, the radiology, the chemical lab, to be able to do all the analysis that we needed to do. The two intensive care units; the intensive care wards and a bed facility, and a triage tent. And it was just wonderful to watch their dedication 24/7.

MONTAGNE: So, what would you say, a fitting end to MASH?

Rear Admiral LEFEVER: Yes, a very fitting end. That the legacy of the MASH still continues. So it's kind of like you started out, a bittersweet. An end to a, an era of a MASH, but at the same time, a legacy of that equipment providing on, and saving lives and taking care of people around the world.

MONTAGNE: Thank you very much for talking with us.

MONTAGNE: Rear Admiral MICHAEL LeFever speaking from Islamabad, where the last Mobile Army Surgical Hospital, better known as MASH, is being donated to the Pakistan Army.

MONTAGNE: This is MORNING EDITION from NPR News.