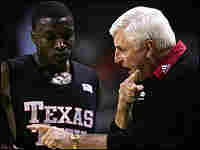 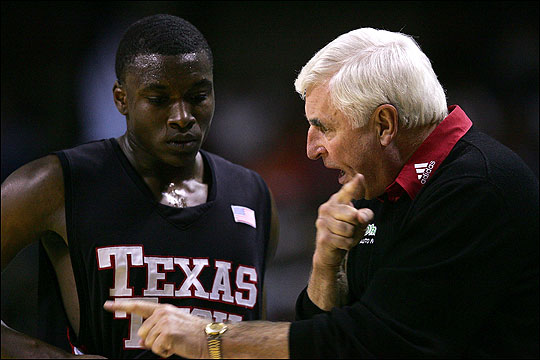 I'm Madeleine Brand, and this is DAY TO DAY. This Sunday, a reality show featuring the notorious college basketball coach Bobby Knight begins. It's called Knight School, and it airs on ESPN. TV critic Andrew Wallenstein has this review.

Mr. ANDREW WALLENSTEIN (Television Critic, Hollywood Reporter): Bobby Knight is giving one of 16 students a shot at the final spot on his basketball team, the Texas Tech Red Raiders. I think that's a mixed blessing for the winner. Knight may be one of college basketballs savviest minds, but he's also one of its most combustible mad men.

That's because Knight isn't known for just leading championship teams at his former school, Indiana University. He's better known for a well-documented history of confrontations with referees, players, and sometimes, courtside chairs, which makes this ESPN-sponsored competition kind of besides the point. I think most people will tune in to see not which student wins the competition, but how quickly Knight loses his patience.

On that count, viewers will be disappointed. Watching Knight School is like standing on the lip of a dormant volcano, and there are no full-blown eruptions. Still, he spews a little ash here and there. Like in this scene, where he takes exception to one particular player's shot selection during a practice session.

Mr. BOBBY KNIGHT (Coach, Texas Tech Red Raiders): Ah, (censored), I want you to think real hard in answering this question. You're out here playing, and I'm sitting on the bench coaching you, and you take that shot. Where do you think you'd be?

UNIDENTIFIED MAN: By you?

Mr. KNIGHT: Oh, no. I wouldn't want you by me. I'd get you as far the hell away from me as I could. You know, see where the hash mark is, and you see where Stu is? I'd have your (censored) about 15 feet beyond Stu with that shot.

Mr. WALLENSTEIN: This show falls short by not giving a full picture of who Knight really is. Nary a peep about Knight's checkered past is heard, only his victories. Knight's coaching style, that of a drill sergeant, is glorified. Here, his son and assistant coach, Pat Knight, makes his father's disciplinary approach sound downright quaint.

Mr. PAT KNIGHT (Assistant Coach, Texas Tech Red Raider): Everybody today is more into how they look on the sidelines, that new wave, I'm a player, type coach. Well, he's not that way. There's only a handful of them left that are more like parents, I think, to the kids, than their buddies.

Mr. KNIGHT: You've got to get over there. I'm not guarding that guy. That's what happens in bad defense. It's a team effort.

Mr. WALLENSTEIN: Knight School may be Knight's way of doing a little image rehabilitation. That bodes well for his future endorsement deals, but not for this television show. This is the problem with reality shows that live and die by their star power. If there's nothing else there, no amount of celebrity can compensate. Martha Stewart can tell you that. So could Richard Branson, Mark Cubin, Tommy Hilfiger. Reality failures, all.

Take the Knight out of Knight School, and you're not left with much. The athleticism on display is about as underwhelming as you might except from 19-year-olds who are not the cream of the college crop. Plus, you have to consider that the illustrious prize they are vying for is essentially to be a benchwarmer, not the stuff of championship TV.

I would have rather seen a documentary following a season at Texas Tech, observing how Knight's anger mismanagement translates to coaching genius. Instead, we got a contrived situation that doesn't tap the emotional fireworks that made Knight famous.