Soon after Hurricane Katrina struck, the first unconfirmed reports surfaced of "mercy killings" -- euthanasia of patients -- at New Orleans hospitals. For months, the Louisiana attorney general has been investigating these charges. That investigation has centered on the actions of doctors and nurses at the city's Memorial Medical Center.

NPR has reviewed secret court documents related to the investigation and not yet released to the public. The documents reveal chilling details about events at Memorial hospital in the chaotic days following the storm, including hospital administrators who saw a doctor filling syringes with painkillers and heard plans to give patients lethal doses. The witnesses also heard staff discussing the agonizing decision to end patients' lives. 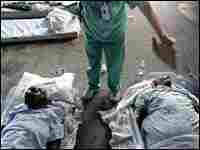 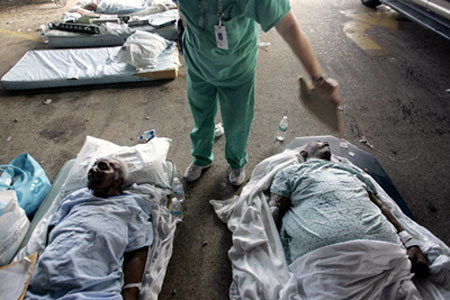 A nurse from New Orleans' Memorial Medical Center fans a patient waiting in the hospital's parking garage to be evacuated via helicopter, Sept. 1, 2005. According to court papers reviewed by NPR, in the chaotic days after Hurricane Katrina hit, eyewitnesses say they heard discussions that a decision had been made to end patients' lives. The discussions related to patients on Memorial hospital's seventh floor, a separate long-term patient care facility run by LifeCare Hospitals. 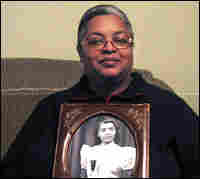 Angela McManus, 48, holds a photo of her mother Wilda Faye Sims-McManus. Her mother was 16 in the photo; she is holding a trophy for a singing contest. Wilda Faye was an acclaimed gospel singer. Carrie Kahn, NPR hide caption 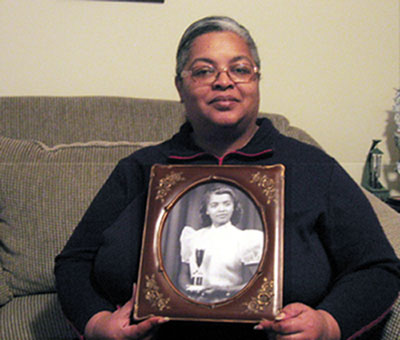 Angela McManus, 48, holds a photo of her mother Wilda Faye Sims-McManus. Her mother was 16 in the photo; she is holding a trophy for a singing contest. Wilda Faye was an acclaimed gospel singer.

Angela McManus describes saying good-bye to her mother for the last time at Memorial hospital.

After Katrina struck the city, conditions at New Orleans' Memorial hospital were horrendous. The hospital was surrounded by water, power was out and back-up generators failed. Temperatures inside the hospital quickly soared past 100 degrees and patients were in distress.

Reports from the Frontline

Listen to NPR reports on the chaos at hospitals in New Orleans in the days and weeks after Hurricane Katrina struck the city:

But it was on the seventh floor of the hospital were the situation was most dire. Memorial Medical Center leased the floor to LifeCare Hospitals, a separate long-term patient care facility. Lifecare Hospitals is based in Plano, Texas. LifeCare has facilities in nine states and considers itself an acute specialty hospital capable of treating the most complex of cases.

There, on the seventh floor of Memorial Medical Center, doctors and nurses were faced with few options. Conditions were deteriorating rapidly, evacuations were sporadic and security was compromised. Staff agonized whether to attempt to transport critically ill patients who might not survive the arduous evacuation. It appears another choice was considered: whether to end the lives of those who could not be moved. In the court documents reviewed by NPR, none of four key witnesses say they knew who made the decision to administer lethal doses of painkillers to the patients. But all four heard discussions that a decision had been made to end patients' lives. According to the documents, attorneys for LifeCare self-reported all of this to the Louisiana attorney general's office on Sept. 14, 2005.

Angela McManus' mother had been on the LifeCare floor for two weeks before Katrina hit. Wilda Faye McManus, 78, was battling a persistent infection due to complications from rectal cancer. Angela McManus says she was given a bed next to her mother and never left her side until Tuesday, the day after the hurricane. She says nurses told her that helicopters were coming for the seventh-floor patients and that McManus needed to get to the first floor and wait for evacuation boats.

Once on the first floor, McManus said, she could hear gunshots outside the hospital. She saw looters sacking a corner drug store. Many sources confirm that at this point, there were 2,000 people -- employees, patients and relatives -- trapped in the hospital. According to McManus, "The sewer lines had all backed up, and we were down there in all that stifling heat and this odor was horrendous. People were trying to get into the hospital just to get to higher ground, and they weren't allowing that... so they boarded the doors up, and we were just in there smothering all night long."

By Wednesday morning, Angela McManus learned her mother had not been evacuated as promised. She rushed back to the seventh floor and said her mother's condition had changed. "She was real lethargic," said McManus. "She would talk to me, then just doze back off. I was like, 'What's going on with her?' I was just sitting there talking to her and stroking her, and she was just sleeping and I'm like, 'Something is wrong'."

McManus says nurses told her that her mother had been sedated. She grew concerned because she says her mother's pain had been manageable with Tylenol and an occasional painkiller. She stayed with her mom for hours and sang gospel hymns to comfort her. According to McManus, attempts were made to evacuate other patients from the seventh floor. She recalls seeing workers desperately trying to get one woman out of the hospital, only to see that the woman died in the process.

Angela McManus became seriously frightened for her mother when she overheard nurses saying a decision was made not to evacuate LifeCare's DNR patients. "DNR means "do not resuscitate." It does not mean do not rescue, do not take care of," McManus said. She tried to rescind her mother's DNR order to no avail. On Wednesday evening, two full days after Katrina hit, Angela McManus says three New Orleans police officers approached her with guns drawn and told her she would have to leave. New Orleans police confirm that armed officers did evacuate non-essential staff from the hospital.

Confronted by police, McManus raced to her mother's bed. "I woke her up and I told her that I had to leave, and I told her that it was OK, to go on and be with Jesus, and she understood me because she cried," McManus recalled. "First she screamed, then she cried. And I said, 'Momma, do you understand?' And she said, 'Yes.' And she asked me, she asked me to sing to her one more time. And I did it, and everyone was crying, and then I left. I had to leave her there. The police escorted me seven floors down."

McManus says that when she left, only eight patients, including her mother, remained alive in LifeCare.

According to court documents reviewed by NPR, a key discussion took place on Thursday, Sept. 1, during an incident-command meeting held on the hospital's emergency ramp. A nurse told LifeCare's pharmacy director that the hospital's seventh-floor LifeCare patients were critical and not expected to be evacuated with the rest of the hospital. According to statements given to an investigator in the attorney general's office, LifeCare's pharmacy director, the director of physical medicine and an assistant administrator say they were told that the evacuation plan for the seventh floor was to "not leave any living patients behind," and that "a lethal dose would be administered," according to their statements in court documents.

According to eye-witness accounts, LifeCare's pharmacy director said that later that Thursday morning, he found Dr. Anna Pou in the seventh-floor medical-charting room. According to his statement, Pou and two unnamed nurses informed him that it had been decided to administer lethal doses to LifeCare patients. From the court documents, it is not clear where the instruction came from. When asked what medication was to be given, the pharmacy director told the investigator from the AG's office that Pou showed him a big pack of morphine vials. The LifeCare pharmacy director stated that, before evacuating, he saw Pou and the two nurses enter the rooms of remaining LifeCare patients.

No one has been charged in the investigation. And nowhere in the documents or in independent interviews conducted by NPR does anyone confirm seeing doctors or nurses administering lethal drugs.

That's just one of the challenges facing Louisiana State Attorney General Charles Foti as he tries to piece together exactly what happened at Memorial Medical Center. For weeks, Foti has said he cannot comment on the ongoing investigation. The attorney general's spokeswoman, Kris Wartelle, says investigators have subpoenaed more than 70 witnesses and are examining volumes of evidence.

Despite repeated phone calls and letters, Dr. Pou could not be reached for comment. In a written statement, Pou's lawyer, Rick Simmons, said: "Dr. Pou and other medical personnel at Memorial hospital worked tirelessly for five days to save and evacuate patients, none of whom were abandoned." In a telephone interview, Simmons said, "Dr. Pou did not engage in any criminal actions." He said he is confident that the facts will reveal heroic efforts by the physicians and the staff in a desperate situation.

Tenet Healthcare Corporation, which owns Memorial Medical Center, declined to comment on tape for this report. On its Web site, Tenet expresses regret for the loss of life at Memorial and praises the work of its doctors and staff. Tenet acknowledges that investigators from the attorney general's office searched Memorial Hospital on Oct. 1, 2005, and removed records and other materials, particularly from the LifeCare facility. Tenet spokesman Harry Anderson said that evacuation plans for the seventh floor of Memorial were the sole responsibility of LifeCare Hospital.

LifeCare spokeswoman Paula Lovell would not comment on the investigation but stressed that the company is cooperating fully with the attorney general. "In deference to the ongoing effort of the AG's office, and out of respect to the families of patients, we are unable to make any comments on matters related to the investigation," Lovell said.

New Orleans Coroner Frank Minyard says it will be difficult to prove if lethal doses of morphine were given. As part of the investigation, he removed tissue samples for toxicology tests from all bodies found at Memorial. He would not say if he found traces of morphine in the samples.

Minyard says the bodies were not retrieved from the hospital until two weeks after the storm and were in advanced stages of decomposition. He says that undermines the accuracy of toxicology tests. "If these people had been treated for their pain prior to the storm, they are going to have it in their system. And they are sick people, and their system is not working like it should work," Minyard said.

In the absence of reliable forensic evidence, all parties say the patient charts containing morphine-dosage levels will be crucial to the case. The attorney general's office will not confirm whether he has seen them.

Meanwhile, investigators are relying on accounts by witnesses like Angela McManus, who is still waiting for answers about how her mother died. "You know, of course I don't know what God's will is," McManus said. "I don't know when he was calling her home. If he did in fact do it, OK. But if man decided that, I want to know that. My family needs peace of mind about that."

Angela McManus has retained a lawyer to investigate the circumstances of her mother's death. She wants answers.