Accessibility links
Sacred Protection for Medicinal Plants The second of a three-part report looks at the role of Tibetan medicinal plants in China's Yunnan Province. Global climate change and a growing world market may be threatening the plants. 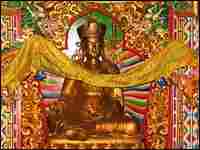 Shrine to Buddha in the home of Chindru, a practicioner of traditional Tibetan herbal medicine. Elizabeth Arnold hide caption 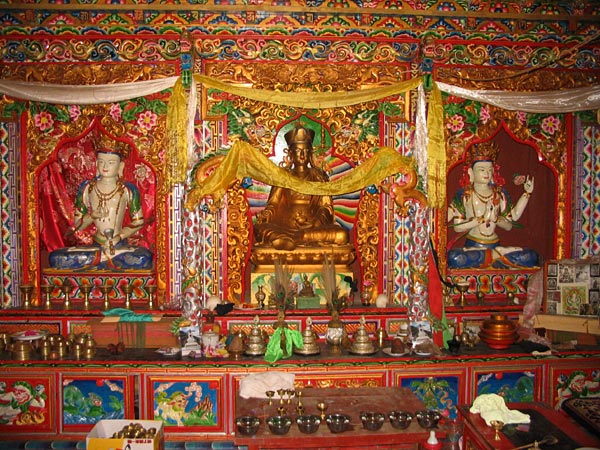 Shrine to Buddha in the home of Chindru, a practicioner of traditional Tibetan herbal medicine. 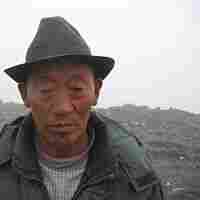 In the peaks where Chindru, pictured above, collects plants for his herbal remedies, some plant species have become scarce and others have simply vanished. Elizabeth Arnold hide caption 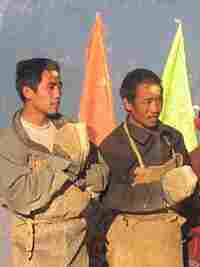 Buddhist pilgrims on the trail circling the sacred peak of Kawakarpo. They wear mitts and aprons because they prostrate themselves for the length of the journey, touching their foreheads to the ground to show their devotion. Elizabeth Arnold hide caption 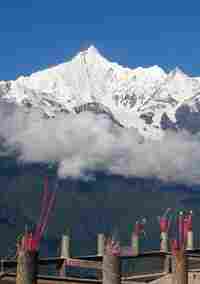 Burning incense at a shrine with a commanding view of Kawakarpo, one of the holy mountains of Tibetan Buddhism. Elizabeth Arnold hide caption 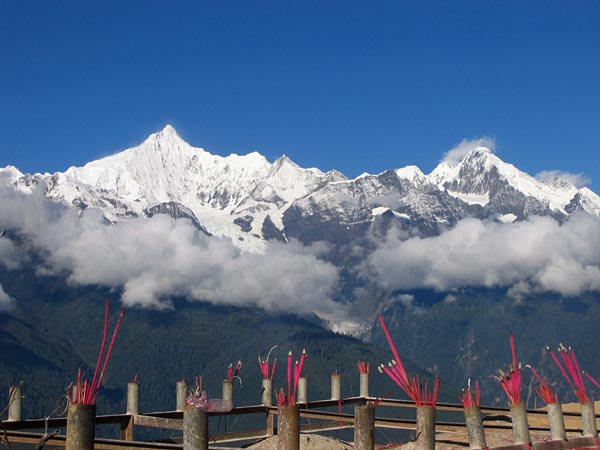 Burning incense at a shrine with a commanding view of Kawakarpo, one of the holy mountains of Tibetan Buddhism.

At the Kunming Institute of Botany, scientists analyze and synthesize the chemical compounds of China's wealth of medicinal plants. The institute's deputy director, Yang Yongping, says the government's goal is to develop a profitable pharmaceutical industry in Yunnan Province -- and that leads to a firm commitment to conservation, to protect the source of potential new medicines.

Many of these medicinal plants are under a dual threat: global warming and the growing global demand for them.

"We have a moral responsibility to keep those species in our earth village," he says.

Conservation is already built in to Tibetan culture, where plants are considered both medicinal and spiritual. There is a revival of Tibetan culture in China, and that's led to a renewed interest in traditional medicine rooted in Buddhism.

The Chinese Institute of Botany has partnered with Jan Salick, an ethnobotanist from the Missouri Botanical Garden, to study medicinal plants and their cultural uses. Religion plays an important part of the healing process, she says. "It's not just plants that are ground up and you take as medicine -- it's a whole belief system."

Traditional doctors also hold a special status in Tibetan culture. We met with Chindru, a 70-year-old doctor in a tiny village carved out of the side of a hillside 100 miles northwest of Sumsteling. In the peaks high above this village where Chindru does his collecting, he's noticed a change -- some species have become scarce, others have simply vanished.

Part of the problem, Salick says, is the growing international demand for traditional medicinal plants. Salick's primary focus is the effect of climate change on high-altitude plants, but she says commercial harvesters are having a big impact on mountain biodiversity.

More than half the 6,000 plant species in Yunnan Province are used for medicinal purposes, with an estimated worldwide market of four billion people. Salick's aim is to partner with traditional doctors like Chindru to encourage Tibetans and Chinese to harvest plants in a more sustainable way to forestall wiping out entire species.

And fortunately, the underpinnings of conservation already exist in Tibetan culture. Holy sites, such as the eight sacred mountains of Tibetan Buddhism, have become pockets of biodiversity in a rapidly changing landscape. The field recording engineer for this series of stories on alpine ecosystems and global climate change was NPR's Leo del Aguila.

Botanist Jan Salick's research is supported by National Geographic Society's Committee for Research and Exploration, which in more than a century has provided nearly 8,000 research grants worldwide. The committee funds everything from primate research to Mayan archaeology to assessing the biological diversity of the deep ocean.