Accessibility links
Saving the Snow Lotus from Extinction A species of Himalayan snow lotus, a cottony white flower, is used in Tibetan medicine and prized by tourists -- and it's popularity has already knocked four inches off the plant's height and could be leading to its extinction. 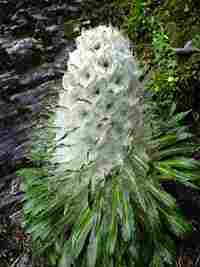 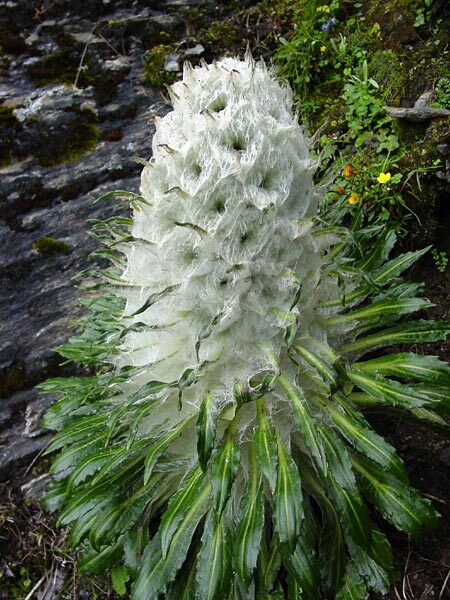 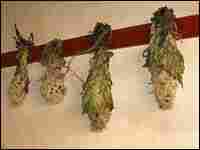 Dried snow lotus blossoms hang from the wall of an herb shop in Deqen, a Tibetan village in the Eastern Himalayas. Elizabeth Arnold hide caption 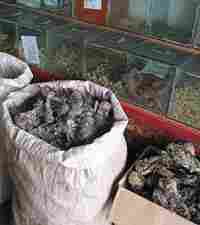 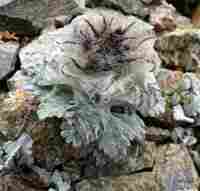 China's newfound love of capitalism has led to a booming new economy, but the nation has not let go of the past. Alongside mobile phones and Nike sneakers in markets in Deqen, a Tibetan village in the Eastern Himalayas, you'll also find stalls and entire shops of herbal medicines with uses that date back thousands of years.

Amid a dizzying array of herbs and roots, graduate student Wayne Law and his adviser, ethnobotanist Jan Salick of the Missouri Botanical Garden, point out the biggest seller: burlap bags full of snow lotus blossoms.

The cottony, white flower is popularly used in Tibetan medicine and prized by tourists. It's also in trouble. Increased world demand for the blossom has already cost one species at least four inches in height due to selection pressure, and could lead to its extinction. Scientists like Law and Salick are trying to save the snow lotus and other plant species threatened by their very popularity.

Medicinal uses for the flower range from rheumatism to what's called "women's diseases." And it's highly sought after by tourists as a symbol of the region, and a memento of their visit.

The plant favors steep, unstable scree slopes well above 12,000 feet. It's got to be tough to survive at the very edge of what's habitable. It even has what looks like a thick wool jacket to keep it warm. "I don't think I've ever seen anything like it before," Law says. "Aren't you just drawn to it? I mean, it's tough, but it's fun."

Law has been keeping a close eye on the particular species of snow lotus that is most prized, Saussurea laniceps. In heavily harvested areas, the plant is all but gone. By comparing the size of specimens preserved in herbariums to plants he finds in the wild, Law believes man has played a role in actually shrinking the species by as much as four inches in the past century.

In an accelerated version of natural selection, harvesters take the biggest blossoms they can find and leave the smaller ones. Those smaller plants are the only ones left to sew their seeds. Traditional Tibetan medicine practitioners harvested only what they needed -- the pressure of the growing world market threatens to wipe the species out.

Botanist Jan Salick's research is supported by National Geographic Society's Committee for Research and Exploration, which in more than a century has provided nearly 8,000 research grants worldwide. The committee funds everything from primate research to Mayan archaeology to assessing the biological diversity of the deep ocean. The field recording engineer for this series of stories on alpine ecosystems and global climate change was NPR's Leo del Aguila.