The home of Volkswagen — Wolfsburg, Germany — hopes to change its reputation as a featureless factory town. London-based architect Zaha Hadid has contributed the Phaeno Science Center, seen as a revolution in building design. 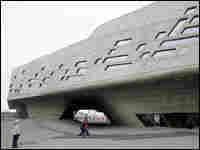 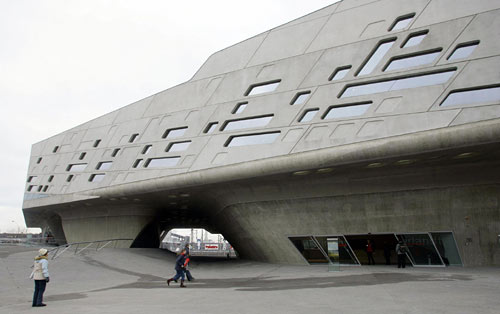 The German city of Wolfsburg is best known as home to the automaker Volkswagen. But now it's also home to one of the most unusual buildings in the country, the Phaeno Science Center. The newly completed complex is the talk of the architectural world, so Kyle James when to Wolfsburg to take a look.

KYLE JAMES: From the train, you used to know you were in Wolfsburg when you saw the dark smokestacks of the Volkswagen factory. But on the other side of the tracks, there is a new landmark that's light years away from VW's heavy brick edifice. It's the latest building by Zaha Hadid, the London-based architect who won the prestigious Pritzker Prize in 2004. Phaeno sits right next to the train station, or maybe hovers is a better word. Hadid has managed to create a massive concrete structure that looks like a spaceship about to take off.

JAMES: Arne Herbote has been given the task of explaining Hadid's work to visitors. Standing outside Phaeno on a cold winter's day, he says the first thing to do is to forget about traditional notions of a building, solid-looking things that are generally fairly square. Hadid instead has created a kind of integrated landscape with hardly a right angle in sight, where different parts of the huge building and it's surroundings appear to flow into one another.

JAMES: The ground Phaeno sits on undulates, creating a landscape of low hills and shallow valleys that lead the visitor into the building or onto a plaza underneath it. The main part of the building is suspended 21 feet above ground on thick concrete pillars, which Hadid calls cones. They house a cafÃ©, a bookstore, a seminar room, and the museum entrance. The cones themselves tilt at various angles, looking almost like organic structures growing right out of the ground.

DIETER BOTEDSKA: It belongs to a new passion in architecture, especially in Germany. It's called biomorph.

JAMES: Dieter Bartetzko was an architectural critic with one of Germany's leading newspapers, the Frankfurter Allgemeine Zeitung.

BOTEDSKA: It means now buildings, with all their new techniques, prefer the form of, for example, plants or animals, but archaic animals. And I think it's a kind of desire to come back to nature, to come back to the status of living which is very near to nature.

JAMES: But this biomorph style, although it looks almost primeval in aspects, is only possible because of fairly new construction technology. Without a special concrete that was developed in Japan in the late '80s, Phaeno's sweeping curves and fractured planes would have never even made it past the drawing board. Inside, the hands-on exhibits from the science center are spread out over a wide-open expanse. Even here, the landscape idea continues. The floor rises and falls to create mezzanine levels. Some of the support cones break through from below to create ripples and eddies in the flow of the interior that people can follow however the want. Peter RÃ¶sner is center's curator.

PETER R: It's all very open, it's all very transparent. There's no wall, no doors inside, so you can flow somehow through this building, and this is very important to open your mind, and the building should help there.

JAMES: The city of Wolfsburg also hopes Phaeno will help its economy. Since VW is shifting more of its production overseas, the town is trying to reinvent itself as an entertainment and tourism destination. Phaeno, with its daring outlook on one possible future of architecture, is an integral part of that plan.