Accessibility links
The Numbers Behind U.S. History Host Debbie Elliott speaks with Richard Sutch and Susan Carter about numbers that tell the story of America. They've edited a new five-volume work, Historical Statistics of the United States. Today, Sutch and Carter discuss what the numbers tell us about the role of the U.S. Post Office in westward expansion.

Listen
The Numbers Behind U.S. History

Host Debbie Elliott speaks with Richard Sutch and Susan Carter about numbers that tell the story of America. They've edited a new five-volume work, Historical Statistics of the United States. Today, Sutch and Carter discuss what the numbers tell us about the role of the U.S. Post Office in westward expansion.

A new documentary portrays a radically different approach to the care of the elderly.

Mr. JOHN GEORGE (Administrator, St. John's Nursing Home): In a very traditional nursing home, in a medical model nursing home, breakfast is at 8:00 in the morning and everyone must be there at 8:00. So we'd start dragging people out of bed at probably 5:30 or 6:00. You throw them at a table and you go get the next one and usually they fall asleep on top of their plate waiting for food because it's not showing up for two hours. In a social model, we don't wake up anybody. We let you rise naturally. Our whole new model care is all about choice.

ELLIOT: Administrator John George and his Milwaukee nursing home are the subject of Almost Home, which airs Tuesday night on PBS. The film follows the lives of a few patients and the staff who try to make fundamental changes in how nursing homes function. John George joined us in our studio to discuss the documentary.

Mr. GEORGE: It strikes a chord with many people. Everyone has a personal story. A grandparent, a parent and...

ELLIOT: And we're all afraid to be in a nursing home.

Mr. GEORGE: And you should be. The way it is today is not necessarily the way any of us want to be, you know, taken care of.

ELLIOT: Now in the movie, we visit with you and your staff and a lot of the people that you care for, and in particular there is this main character, Mr. Harold. Can you tell us a little bit about him and his story?

Mr. GEORGE: Mr. Harold was a prominent figure in Milwaukee. He, as you can see in the movie, was the first president of the Milwaukee Art Museum and his wife actually, I believe, had a television show on for a while, maybe in the 70s. Right before filming took place, he became a resident of the nursing home, not knowing if he would get better enough to ever go back up to independent living or not. And he didn't. He ended up staying with us. And so they became a couple that really was of interest to follow.

Mrs. HAROLD (Wife of St. John's Resident): The Parkinson's was just as bad as it could get, so his body was just so damaged. He needs massive physical therapy, occupational therapy and speech therapy. He really assumed he was going to come back to the apartment. He probably won't get here until February at the earliest. Which does not please him. But yeah, he's a very stubborn individual. I love him dearly. Our 55th wedding anniversary was yesterday.

ELLIOT: One of the interesting things about his story was he develops a relationship with somebody else.

ELLIOT: In the nursing home. And you and your staff are faced with this choice of, do we do anything about this? What do we do? How do you make that decision?

Mr. GEORGE: We went back and we just said, you know, he is his own person, these are two adults and he's made this decision. And so it didn't become a question of really stopping the relationship. The question became more that we wanted to make sure that Mrs. Harold, before seeing the movie, was aware of this relationship, and as it came to be, she was, and she was okay. And so many people who saw it were concerned for them as a couple, and at the premiere, Mrs. Harold actually stood up and thanked the film's producer and co-producer for being so sensitive to their family issues. So...

ELLIOT: Was this hard for families? Was this not a bit of an invasion of their privacy, being put on the screen like this?

Mr. GEORGE: Families have reacted very well to it. The filmmakers and the editor did a fantastic job of being sensitive to those issues and showing both sides in a really sensitive way, because it was what it was.

ELLIOT: Let's talk a little bit about some of the changes that you have made and how they've worked. For instance, people aren't forced to get up at a certain time.

Mr. GEORGE: No, that's the most wonderful thing.

ELLIOT: Why is that so wonderful?

Mr. GEORGE: Well, because in the case of almost every nursing home, you know, breakfast is served at a very specific time for efficiencies. And in order for a nursing assistant to do that, to get up eight to ten people, you need to start waking people up at about 6:00 in the morning. Well, that's the deepest sleep period that elders have. And so you're dragging people out of a deep sleep, taking them to a table where the food really isn't coming for a couple hours and they fall back asleep and it disrupts their whole day. It causes behavioral problems, they act out like all of us would, you know, if you were woken up in the middle of the night continually. They don't eat as well. And so one of the first things we did is we just let people rise naturally. And lo and behold, some people still come to breakfast at 7:00, 7:45 in the morning. And some people don't get up until about 10:00 o'clock in the morning. And that's okay.

ELLIOT: Besides the wake-up, what are some of the other things that you've changed?

Mr. GEORGE: We've given them choice in food. If they want to eat bacon five, seven days a week and their doctor has recommended them not to, we work with the doctor to liberate their diets. If you've lived 90 years eating bacon all the time, why at 90 should we give you a bland diet that doesn't taste good? So we really are very liberal on diets, working with doctors. Alcohol. Cocktail parties were really important in their day and the people in our independent living have cocktail parties all the time. So we have cocktail parties every Monday at 4:00 o'clock. We've worked with doctors. Half the residents get a drink that has no alcohol in it. Some, they want a gin and tonic, they get it.

ELLIOT: Do they have fun?

Mr. GEORGE: They love it. The attendance at those is huge. People show up. They really enjoy those types of things. This year, we're going to allow residents to paint their own rooms, to paint their nursing home room, they can paint...

ELLIOT: They can have their own choice.

Mr. GEORGE: They can have their own choice.

ELLIOT: So have you had any families, though, that have said, well, wait a minute, I don't think my father should be having a cocktail?

Mr. GEORGE: We've had families come forward and say the opposite, that they've seen loved ones really come around and behavior changes that were fantastic.

ELLIOT: There must be some skeptics out there in the nursing home industry who might say this is not what's best for these people, that you don't need to be giving them alcohol at 4:00 on Monday afternoon.

Mr. GEORGE: Yeah, there's a lot of skeptics out there. It was interesting. As we started this process and people started to notice that things were different at St. Johns, other administrators would come and say, yes, but what do the state surveyors think of this? You know, this is all fine and...

ELLIOT: What the regulators think?

Mr. GEORGE: Right. This is all fine and good, but have you had a state survey? Actually, during the filming process, we went through a state survey and we came out with a perfect survey. Regulators have been very positive about these changes and are calling out themselves for change.

ELLIOT: When you are watching the film with Mr. Harold, how did he react? What did he like about the film?

Mr. GEORGE: He was in his heyday. He was the center of attention and he was back in his element. It does, it does portray some really intimate moments of himself, of his family, of his dynamic with his wife. And that was okay.

ELLIOT: What about you? Is there a favorite scene in the film that moves you more than others?

Mr. GEORGE: There is a favorite scene in the film, which is different. Mr. Haig, which is one of the characters that we follow, he and I really had locked horns several times around the care of his wife. Very rigid man who wanted his wife up at very specific times. And it took me a long time to really get to understand where he was coming from and why. And there's a scene towards the end of the movie where he is painstakingly drawing on the eyebrows of his wife and then applying eyeshadow on her.

Mr. GEORGE: And talking about how he had made a vow to her to the day he died, to take care of her, and every time I watch that I get very teary eyed, thinking we should all be so lucky to have someone so devoted to us, to our last breath, that they would do that for us. And after watching the film, I had such a different impression of him.

ELLIOT: Because that's not something you would necessarily see as an administrator?

Mr. GEORGE: I had seen the very regimented, she needs to be up now, she needs to have her breakfast now, and this was, I understood the why that went with the question.

Mr. GEORGE: And the deep love that this man really does have for his wife.

ELLIOT: John George is the Administrator of the St. John's on the Lake Nursing Home in Milwaukee Wisconsin and he's featured in the new documentary, Almost Home. Thanks for speaking with us.

ELLIOT: You can explore more about nursing home reform at our website, npr.org. The documentary, Almost Home, airs on PBS Tuesday night. 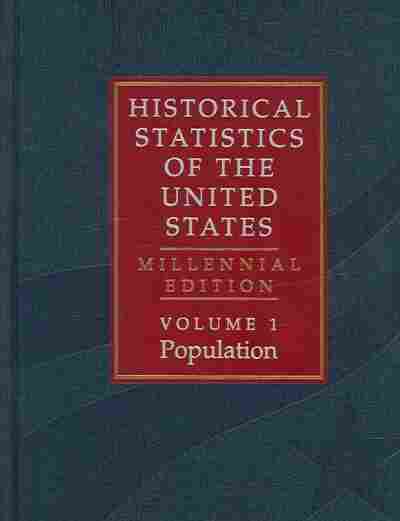 Historical Statistics of the United States