Accessibility links
Celebrating the Corn Flake's Centenary From tuna noodle casserole to mango-almond crisp, corn flakes aren't just for breakfast anymore -- and haven't been for decades. On the 100th birthday of the all-American breakfast cereal, Bonny Wolf shares two recipes that make the most of the humble corn flake. 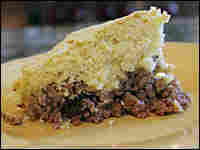 One of my grandmother's standard dishes was a tuna noodle casserole with corn flakes on top, a staple of many American homes in the 1950s. It used not only corn flakes, but canned tuna and a can of cream of mushroom soup. We probably had Jell-O for dessert.

Wednesday marks corn flakes' 100th birthday, and even the most sophisticated cooks probably have corn flakes in their past -- and in their pantry from time to time as well.

Bonny Wolf is a regular contributor to Kitchen Window and to NPR's Weekend Edition Sunday. She is working on a book of food essays for St. Martin's Press. You can find more information at her Web site, www.bonnywolf.com.

Corn flake recipes know no geographical boundaries. The same tuna noodle casserole has been served in homes from east to west and north to south.

Elizabeth Becker grew up in Iowa in a family with six children. She says Thanksgiving with her family wouldn't be complete without sweet potato balls wrapped in corn flake crusts. "This is a recipe that should only be made with several energetic children as sous chefs," she says.

While there is no written recipe, she remembers the procedure:

"Boil and mash sweet potatoes. Cover all sides of a marshmallow with the mashed potatoes and roll the ball around on corn flakes that have been crushed with a rolling pin. Do this dozens of times until you've used up all the sweet potato mash. Place these balls on greased cookie sheets, leaving enough space so they can expand. Bake in a 350-degree oven for about half an hour. Serve."

Donelle Hudson grew up in Louisiana where her Aunt Jim made Texas Delight cookies with corn flakes, oatmeal, pecans and coconut. Her mother, an excellent cook, was noted for her corn flake chicken casserole, still a family favorite, Hudson says.

The ways to use corn flakes as something other than breakfast cereal seem to be unlimited. There are more than 100,000 Web sites that feature corn flake recipes. There are recipes for cookies, candies, breads and muffins. Corn flakes are added to meatloaf and cabbage casseroles. They figure prominently in oven-fried chicken and are used as an ice cream topping (with coconut and peanuts).

In 1923, W.K. Kellogg had hired Mary Barber to set up one of the industry's first professional home economics departments to develop recipes using the company's cereals and provide consumer information on diet and nutrition.

Corn flakes were created by accident. With a sixth-grade education and six years as a traveling broom salesman, W.K. Kellogg had gone to work at the Battle Creek (Michigan) Sanitarium where his brother John Harvey Kellogg was the chief physician. The sanitarium was affiliated with the Kelloggs' Seventh Day Adventist Church and, therefore, had a vegetarian kitchen.

The brothers spent years trying to improve the patients' diet. In 1894, while trying to make a wheat-based granola, W.K. accidentally left a pot of boiled wheat to stand for too long. Though the grain was softened and seemingly stale, he went ahead and put it through the usual rolling process. Rather than creating a sheet of dough, each grain came out as a thin flake that the brothers then baked. And so, breakfast cereal was born. In 1906, W.K Kellogg went into the business.

But somewhere, someone must be making a 100th birthday cake using corn flakes.

TV chef Daisy Martinez created this recipe for the 100th anniversary of Kellogg's Corn Flakes. Picadillo is a popular dish in many Spanish-speaking countries. The olives and raisins give it a sweet and sour taste. This recipe tops it with a cornbread-like crust.

*Meatloaf mix is a combination of ground beef, veal and pork.

**Olive spread or olive salad is sold in some markets. It's basically olives, oil, pimientos and often other ingredients. If you can't find a salad or spread, use chopped green olives stuffed with pimientos.

***Put the corn flakes in a zip lock bag and hit with the back of a heavy spoon.

Heat olive oil at medium-high heat in a large skillet and brown the meat, draining the oil when the meat is brown. Work in the tomato paste, stirring so it doesn't stick. Add the finely crushed corn flakes, the olive salad and the raisins, mixing until well blended. Add the beef broth in thirds, stirring so that mixture thickens slightly. Add salt and fresh ground pepper, and place in a 9-by-9-inch baking dish.

Pour the corn flakes mixture over the picadillo, and dot with butter. Bake 20-25 minutes, or until bubbly and crusty golden in some spots.

Cream the butter and brown sugar until light. Cut in the flour and almond flour until crumbly. Fold in the corn flakes and refrigerate 15 minutes.

Using the pit of the mango as a guide, cut down along the broad side of the mango so that you have 2-inch "halves." Remove the skin from the mango and then slice crosswise into 1/2-inch slices. Toss with lime juice. Mix the ginger, sugar, and corn starch together and mix in with the mango.

Spray a 9-inch baking dish with baking spray, add the mango, sprinkle with crumb topping and bake for 20-25 minutes, or until golden and bubbling. Serve warm.