An Italian speed skater stole the spotlight Tuesday from feuding Americans Shani Davis and Chad Hedrick in the highly anticipated 1,500 meter event. Enrico Fabris took the gold medal in an upset. Davis won the silver and Hedrick, who had dreams of winning five gold medals in Turin, took the bronze. 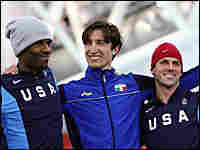 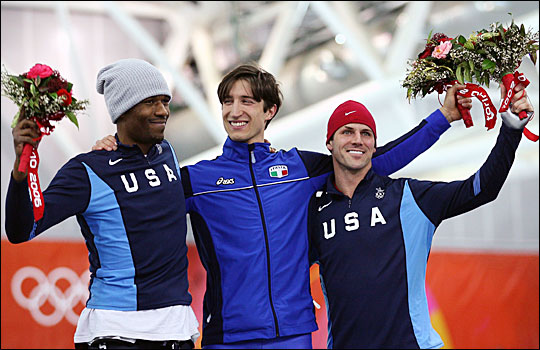 And I'm Melissa Block. Italy has scored its biggest victory of the Winter Olympics. Today speed skater Enrico Fabris upset the favored Americans to win the men's 1,500 meter race. It was supposed to be a battle between rivals Shani Davis and Chad Hedrick of the U.S. They both still won medals and as we hear in this report from NPR's Tom Goldman, Davis and Hedrick showed they've developed a real rivalry.

As the Olympics have clipped along the buildup to the men's 1,500 meters has grown a bit each day. When Americans Joey Cheek, Chad Hedrick and Shani Davis each won speed skating races beforehand, the 1,500 suddenly took on showdown at the O.K. Corral proportions. All three gold medalists were entered, and two of them, Hedrick and Davis, didn't much like each other if you believe the media reports coming out of Turin. But look who rode into the corral.

As Italian Enrico Fabris took the ice the partisan cheers grew and they never stopped. Fabris skated the fastest time of the night and then waited in agony, he said later, as first Hedrick the world record holder and then Davis the former world record holder, took their turns. Neither was faster than Fabris who won his second gold medal of the games. Italian journalists were thrilled with the outcome. So were American reporters.

With Davis taking second and Hedrick third, that meant both athletes would attend the post race press conference, which promised to be a pro wrestling smack down speed skating style. A bubbling rivalry between the two heated up in Turin after Davis announced he wouldn't race in a new team event called the Pursuit. Instead he wanted to focus on his specialty, the 1,000 meters. Hedrick publicly questioned Davis' team spirit, and after Davis won the 1,000 Hedrick refused to congratulate him. At the press conference Davis went first trying to downplay all the negative reports by recalling a famous rivalry in pro basketball.

SHANI DAVIS (Olympic Speed Skater): I mean we're not Kobe Bryant and Shaquille O'Neal. We're here to do our job, and our job is to try and win. It's not like we're going to go fight each other, roll around in the snow. I mean we're adults.

GOLDMAN: Davis was particularly upset with what he believes is an attempt by the media to highlight the rivalry as a way to generate interest in speed skating.

Mr. DAVIS: I don't want to be the punching bag of anybody to make people care about something that they don't, wouldn't normally care about. I'm sorry. I've been skating since I was six years old and I have a lot of respect for this sport.

GOLDMAN: Down at the other end of the press conference table a noticeable distance away, Chad Hedrick smiled and shook his head.

CHAD HEDRICK (Olympic Speed Skater): See, once again we have a difference in opinion like always. I think it's great that they're trying to make this sport and it's Shani and I battling each other. That's what this sport needs.

GOLDMAN: Hedrick said it's what he and Davis need as well. Without the tension between us, Hedrick said, we wouldn't be as good. When one reporter asked if the two were the Tonya and Nancy of speed skating, referring to the former figure skating rivals, Hedrick playfully picked up his water bottle and faked like he was throwing it at Davis. While they acknowledge the rivalry, Davis and Hedrick agreed it really wasn't personal. It was just the way two highly competitive athletics deal with each other. And reporters seemed to buy it until Davis answered the last question of the press conference with this.

Mr. DAVIS: It would have been nice if after the 1,000 meter he could have been a good teammate and shook my hand. Just like I shook his hand or hugged him after he won the 5,000 meter.

GOLDMAN: Davis stood up and walked out. Hedrick stayed and explained the no handshake was because of Davis pulling out of the team event.