Accessibility links
Shiite Cleric Urges Calm in Wake of Shrine Bombing The bombing of one of Shiite Islam's holiest shrines sparks mass protests and violence in many parts of Iraq. The top Shiite cleric urges followers to refrain from violence. With sectarian tensions already running high, the bombing prompts attacks on Sunni mosques.

The bombing of one of Shiite Islam's holiest shrines sparks mass protests and violence in many parts of Iraq. The top Shiite cleric urges followers to refrain from violence. With sectarian tensions already running high, the bombing prompts attacks on Sunni mosques. 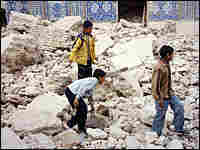 Iraqi Shiites walk on the rubble of the damaged al-Hadi Shiite shrine, the Golden Mosque, in the northern Iraqi town of Samarra, Feb. 22. Reuters hide caption

And I'm Robert Siegel. No one was killed in the blast, but today's bombing at a Shiite shrine in Iraq set off a wave of sectarian outrage and violence. Protestors took to the streets in Baghdad and attacked Sunni mosques. Elsewhere, Shiites gathered to denounce the bombing, and there were reports that Sunni clerics had been kidnapped or killed. The Iraqi government has appealed for calm. President Jalal Talabani called the attack on the shrine the work of extremists trying to provoke civil war. We're going to begin our coverage this hour with NPR's Jamie Tarabay.

JAMIE TARABAY: Samarra, about 60 miles north of Baghdad, is a predominantly Sunni town, but its historic Golden Mosque contains the tombs of two revered Shiite imams from the ninth century, and it has long attracted Shiite pilgrims from around the world. Early this morning, assailants broke into the shrine, placed explosive charges inside the two-story building and left. The ensuing blast shattered the mosque's gold-plated dome, sending debris tumbling down its caramel-colored walls. The message from the insurgents could not have been clearer, and the reaction was swift, sharp and furious.

TARABAY: As news of the explosion spread, Shiites took to the streets in their thousands. They attacked Sunni mosques in Basra, but were soon blocked by militiamen loyal to Shiite cleric Moqtada al-Sadr. In Baghdad, protestors burnt two Sunni mosques to the crowd. Other Sunni mosques were damaged, and the Interior Ministry says three Sunni clerics were killed and a fourth kidnapped. Shiites in Najaf rallied in front of the office of their leading cleric, Grand Ayatollah Ali al-Sistani. The crowd chanted, Rise up, Shiites. Take revenge. Policemen marched by carrying placards that said, Send us to Samarra.

TARABAY: Iraqi leaders called for calm and for bereavement. Prime Minister Ibrahim al-Jaafari announced a three-day mourning period. Sistani declared it would be seven. In neighboring Iran, ayatollahs in the holy city of Qom announced one day of mourning.

TARABAY: In one of Baghdad's Sunni neighborhoods, Iraqi police and soldiers set up road blocks to thwart marching protestors and deployed around Sunni mosques to ward off attackers. Soldier Hashim Shawey (ph) says those who are trying to provoke a civil war between Shiites and Sunnis will fail.

HASHIM SHAWEY: (Through translator) We are here to protect Iraqis from the terrorists. We believe in all religions and all sects, and we don't see any difference between Sunnis and Shiites.

TARABAY: There's been no claim of responsibility for the attack in Samarra. Security forces there arrested five police officers who were responsible for protecting the Golden Mosque. Iraqi leaders say the attackers want to sabotage efforts by Sunni and Shiite politicians to work together and form, along with the Kurds, a government of national unity. The country's national security advisor and U.S. officials blamed al Qaeda-linked groups for the attack.

TARABAY: As the streets erupted in Baghdad and elsewhere, Moqtada al-Sadr's militia rapidly began organizing the protestors and keeping the peace. Sadr cut short a visit to Lebanon to return to Iraq and answer his followers awaiting word on how to act. At a press conference today, Sadr supporter and government minister Salam al-Malaki warned that Shiites will not be silent for long.

SALAM AL: (Through translator) We know there are many enemies of Islam and Iraq, but we trust Iraqis and Muslim leaders to solve this problem soon. We also know the Shiites still scare their enemies.