The eight winners of the nation's largest lottery prize speak to the public about their newfound wealth. The new millionaires all work the night shift at a Lincoln, Neb., meat-processing plant. Nebraska Public Radio's Sarah McCammon reports. 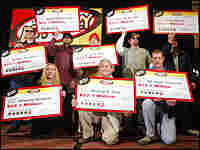 The eight winners of the recent $365 million Powerball Jackpot. From left to right in back row, Robert Stewart, Alain Maboussou, Dung Tran, Eric Zornes and David Gehle. In the front row, left to right, are Chasity Rutjens, Quang Dao and Michael Terpstra.

SARAH MCCAMMON: News that the winning ticket had been purchased at a convenience store in Lincoln set off a swirl of rumors in the city about who the winner or winners could be. But the eight workers from the Con Agra plant who held the winning ticket as part of an office pool managed to stay hidden until today. The eight, seven men and a woman, were announced at a packed press conference in the ballroom of a Lincoln hotel.

DAVID GEHLE: You never dream of something like this happening.

MCCAMMON: 53-year-old sanitation supervisor David Gehle said he was feeling a little overwhelmed by all the attention.

GEHLE: And a bunch cameras. (LAUGH) I'm not use to it. It makes me nervous but it's amazing.

MCCAMMON: Wearing a pair of sunglasses, 30-year-old maintenance supervisor Rob Stewart said the group had been working with an attorney to draw up an agreement for sharing the prize money. Stewart says they also had to wait an extra day to claim their winnings because of the President's Day holiday on Monday.

ROB STEWART: I don't believe much of us had much sleep. We've been on the run from all of you. (LAUGH)

MCCAMMON: All of the group worked long hours at the ham processing plant. Many of them putting in 65 to 75 hours a week. 29-year-old Chasity Rutjens, a packaging superintendent, says they pulled together after learning the group had the winning ticket.

CHASITY RUTJENS: We were all in agreement. Right away we all wanted the lump sum. But we really have gotten along really well. We haven't had a lot of disagreements. We just discuss everything as a group. And we haven't really had a hard time agreeing on anything. It's just take it step by step. That's what we've done.

MCCAMMON: Like most of her coworkers, Rutjens says she's not sure what to do next.

RUTJENS: It's still a blur. We're still thinking we're going to wake up from a dream or something and it's not all true. We're trying to grasp the fact that we're millionaires now so.

MCCAMMON: Third shift plant superintendent Mike Terpstra said he never really expected win. Terpstra, who is 47, says he's been participating in the lottery pool at the plant for more than four years.

MCCAMMON: But 26-year-old Alain Maboussou who came to the United States with his family as a refugee from the Democratic Republic of Congo in 1999, does know what he wants to do. Now the father of 3-month-old baby girl, Maboussou says he's ready to spend more time with his family and his studies.

ALAIN MABOUSSOU: I might go back, because it even a struggle for me going back and school, can't go because of the money and you know working 70 hours a week, 75, so. Hopefully now I'm stable and I'm go back to school finish up.

QUANG DAO: This is a great country (APPLAUSE)

MCCAMMON: 56-year-old Quang Dao, another immigrant who left Vietnam in 1988, says he has family in Vietnam and hopes to help them with some of his winnings. 34-year-old Dung Tran, another Vietnamese immigrant, says he plans to stop working at least for a while and spend more time with his wife and child. Each of the eight winners decided to take a lump sum payment. After taxes, that works out to $15 and a half million dollars each. For NPR News, I'm Sarah McCammon in Lincoln, Nebraska.