Accessibility links
U.S. Men's Hockey Team Falls Out of Reach of Medal The U.S. men's hockey team capped a disappointing Winter Olympics by losing a quarterfinal match to Finland with a score of 4-3. The American team never gelled, winning only once in six games.

The U.S. men's hockey team capped a disappointing Winter Olympics by losing a quarterfinal match to Finland with a score of 4-3. The American team never gelled, winning only once in six games. 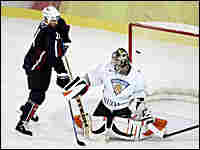 The puck goes past Finland goalie Antero Niittymaki (R) and Mike Knubble (L) of the U.S. on a shot by Mathieu Schneider of the U.S. to score the Americans' first goal in their quarterfinal match-up, Feb. 22. Reuters hide caption

Now, the latest from the Winter Olympics where it is over for the U.S. Men's Hockey Team. Today the Americans lost 4-3 to Finland in the quarterfinals. A defeat that knocks the U.S. out of medal contention. The unbeaten Finns were too much for the American team, which never really got its game going. That was just one of four quarterfinal games today. In another between two hockey powers, Russia defeated Canada 2-0. NPR's Chris Arnold has this report from Turin.

CHRIS ARNOLD: The U.S. played a pretty ugly first period, taking desperate shots, not taking time to set up good plays and unable to keep the puck down on the ice where it belongs. Midway through the first period Finland was up 2-0. NHL veteran player Mike Modano says the team was rattled by that point and the challenge was to keep focused and still try to play good hockey.

MIKE MODANO: 10 minutes into it, you know, and there's 50 minutes left in the game, you know, a little composure, a little less panic, and just play the game.

ARNOLD: Playing the game has been tough for the U.S. team. Forward Mike Knuble of the Philadelphia Flyers says some of the better players have just been in a slump over here in Turin.

MIKE KNUBLE: Our effort was there and I think two week tournament you don't have time to work out these little slumps. So, if anything, our scoring was in a slump a bit, and you see bona fide NHL scorers, you know, with not a lot of shots, and not a lot of goals, and you know, it's tough, you don't have time in these things to work out the kinks. You're either on or you're not.

ARNOLD: but right before the end of the first period the U.S. scored a goal and was just behind by one. And when they came back on the ice in the second period they looked like a different team. They were keeping the puck on the ice and not taking the first shot, but moving the puck around to find a really good one and the U.S. quickly scored again on a nice play that set up a slap shot by Mathieu Schneider.

KNUBLE: We're thrilled to be where we were at the time, you know. We played extremely well and a quick one right out of the gate and great shot by Schneider. It was 38-minute game from there on, you know. And then the penalties cost us.

ARNOLD: The U.S. played much of the game short handed with a total of 30 minutes of penalties in the one-hour of playing time. The U.S. got caught again and again for hooking the Finnish players with their sticks. At one point, Derian Hatcher hit a Finnish player square in the face with his stick, bloodying his nose on the upswing from a hard pass and was called for high sticking. A couple of U.S. players tried to argue the call, but the penalty stood. Ryan Rolston said all the penalties just killed the U.S. team, leaving them repeatedly with two guys in the penalty box.

ARNOLD: With the U.S. team outnumbered and outplayed the Finnish player Olli Jokinen scored two goals in the second period, leaving the U.S. team down again by two goals. And it was just too big a hole to dig out of. Mike Modano, like many players, was dejected after the game.

MODANO: You know, we all thought we were better than this. I think a lot of people had expectations, the people back home and we did. They probably know more, more so than we did in the locker room, but, you know, it's disappointing and been down here for a while, and go home and start playing there.

BLOCK: And a reminder that the latest Olympics results, medal standings, and photos are at our website: npr.org.