Accessibility links
Christopher Dickey on Hamas, Protests, and Iran A new Hamas-led government; protests against cartoons of Muhammad; a re-started nuclear program in Iran: It's a busy time for journalists specializing in the Middle East. Christopher Dickey is the regional editor for Newsweek. 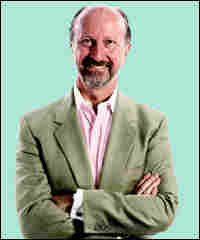 The new Hamas-led Palestinian government is causing U.S. and Israeli leaders to analyze their aid policies. Also in the region, Muslim protests continue against cartoons that depicted the prophet Muhammad.

Those two developments -- and a re-started nuclear program in Iran -- mean that it's a busy time for journalists specializing in the region. Christopher Dickey is the Middle East regional editor for Newsweek magazine.

Dickey, the Paris bureau chief for Newsweek magazine, is also the author of the novel The Sleeper. The 2004 thriller tells the story of an Army veteran -- and former terrorist --living in the United States. But the attacks of Sept. 11, 2001, prompt him to target his former al-Qaida comrades.