Accessibility links
Rotavirus Added to Bulky List of Childhood Vaccines Health officials recommend adding vaccines for flu and rotavirus to the regimen of childhood immunizations. Rotavirus is the leading cause of severe diarrhea in infants and young children. Parents are objecting to the number of advised shots. 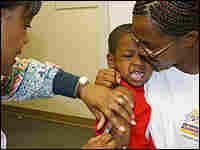 Two new vaccines may be added to the regimen of childhood immunizations. Experts at the Centers for Disease Control and Prevention (CDC) suggested this seek that all children ages 2 to 5 get flu shots. Research shows young children are among the main spreaders of the flu.

Also recommended is a less-familiar vaccine against rotavirus, the leading cause of severe gastrointestinal illnesses in infants and young children.

In developing nations where medical facilities may not be readily accessible, a rotavirus infection can be harsh and deadly. In the United States, most children recover at home. Even so, CDC epidemiologist Umesh Parashar says outcomes can be severe.

Rotavirus prompts more than 400,000 physician office visits, more than 200,000 emergency room visits, and an estimated 55,000 to 70,000 hospitalizations each year, says Parashar. It also kills 20 to 40 children each year in the United States.

The vaccine is a live virus in a liquid and administered by mouth. Three doses are recommended, given at 2, 4 and 6 months of age. Parashar says that in clinical trials, the vaccine proved highly effective.

Nearly every child in the world contracts the virus repeatedly before the age of 5. In the United States, it costs about $300 million to treat the disease. That includes doctor visits, medications and visits to the ER. And another $600 million, according to Parashar, when indirect costs are included, such as parents taking off work to care for sick children.

But the vaccine faces some hurdles, including perceptions of its safety. This vaccine's predecessor was taken off the market five years ago when it was found to cause a serious bowel obstruction. The new vaccine, RotaTeq, was studied in thousands of infants.

"This vaccine was studied in trial with over 71,000 children in an attempt to see if the vaccine was associated with this complication," says Dr. Joseph Bocchini, a pediatrician and infectious disease specialist who participated in the trial.

Bocchini says he's confident of this vaccine's safety. Even so, researchers will follow newly immunized infants to check for any rare side effects. And, while some parents may balk at another vaccine added to the recommended regimen, Bocchini says parents should consider another point of view.

"We're really living in an age where we have the opportunity to prevent infection, and so the number of vaccines as they increase, really increase the chance their child will live a healthier life and be less likely to develop serious illness, " says Bocchini. "I think one of the problems parents face is that because of the success of the vaccine program, we don't see as much of the diseases and consequences that the vaccines now prevent."

Vaccines have drastically cut the prevalence of measles, chicken pox, whooping cough and polio. All are now diseases that cause far more sickness and death in the developing world than in the United States.

The new vaccine is expensive, at $60 a dose and more than $180 for the recommended course. If Secretary of Health and Human Services Michael Leavitt agrees with the CDC advisory committee and officially recommends the new vaccine, that will likely pave the way for private insurance coverage. Federal programs for low-income children would have to be expanded to cover the vaccine's cost.

One was to encourage vaccine manufacturers to stay in the business by protecting them from large product liability claims. The other was to encourage parents to continue giving vaccines to their children. The Act established a compensation fund for anyone who developed a serious adverse reaction.

As part of the Act, health professionals and vaccine manufacturers are now required to monitor the safety of vaccines once they're approved for public use. The Centers for Disease Control and Prevention (CDC) and the Food and Drug Administration have established the Vaccine Adverse Event Reporting System (VAERS) to monitor vaccine safety. Anyone can report a reaction to an immunization by phone — 1-800-822-7967 — or through the VAERS Web site, www.vaers.hhs.gov.

The VAERS system played key a role in the removal of an earlier rotavirus vaccine, RotaShield, from the market. Fifteen cases of a potentially life-threatening intestinal blockage in infants were reported to VAERS.