Accessibility links
Retirement Communities Wild About Pickleball You may not have heard of pickleball, but if you move to certain retirement communities in the Southwest, you'll discover that it's the hottest game in town. The racket game was invented by a congressman and named for his dog.

You may not have heard of pickleball, but if you move to certain retirement communities in the Southwest, you'll discover that it's the hottest game in town. The racket game was invented by a congressman and named for his dog. 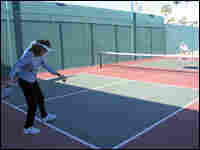 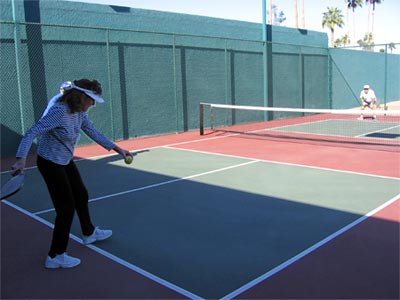 Here's a question. What do you get when you cross tennis, badminton, and ping-pong? You get pickleball. It's mostly played in schools and at recreation centers and, as NPR's Ted Robbins reports, pickleball is becoming wildly popular in retirement communities.

(Soundbite of ball being hit)

At first glance, pickleball seemed vaguely familiar. I mean, it's basically people on a court using rackets to hit a ball over a net. But look again and things seem a little bit off. The court is like a tennis court in quarter size. The racket is an oversized ping-pong paddle. The ball is a wiffle ball, round with holes in it. And the name is a little odd, too.

Ms. WASSERMAN: We've had people come down here and play that have played racquetball and tennis, and they said this gives them a much better workout than tennis or racquetball.

ROBBINS: Pickleball is so popular in Arizona retirement communities, that courts are a selling point. But it's also still popular where it originated, in the rainy northwest, on Bainbridge Island, across from Seattle. The year was 1965. A man named Joel Pritchard had kids who were bored. Pritchard, who, by the way, would become a Congressman, picked up a ping-pong paddle and a wiffle ball.

Mr. BARNEY MCCALLUM: Joel, said, hey, you kids get out of here, and take this ball and this paddle, and go up and hit it around up in the badminton court.

ROBBINS: That's Barney McCallum, Joel Pritchard's neighbor back then. Now 79, we reached him on Maui, 20 feet from the ocean, with a pickleball court behind his condominium. But, back to the story. The neighborhood kids had so much fun, they kept playing. Then the adults joined in. But the ping-pong paddle was too small for the softball-sized wiffle ball, so Barney McCallum went home to the band saw in his garage.

Mr. MCCALLUM: I cut out two different paddles, little different sizes. Jokingly, I said the M2, which stood for McCallum second variation, that has stayed with us forever.

ROBBINS: They argued over the rules. Overhand, or underhand? Underhand. A high net like badminton, or a low net like tennis? A low net. And the scoring, you score points only when you serve, and first one to 11 wins. One thing Barney McCallum says there was no argument over was the name.

Mr. MCCALLUM: The Pritchards had a dog named Pickles, and you're having fun at a party, right? Doing something, and so anyways, this off-hand remark, what the hell, let's just call it pickleball.

ROBBINS: Now, fit and tan people in the southwest, like Teresa Smith, are wearing shirts with pickle insignias on them. The food, not the dog. She says the game is easy to learn, and fun to play.

Ms. TERESA SMITH (pickleball player): And it's a great social game. When we play it, we laugh a lot, even though we're very competitive.

ROBBINS: An estimated 50 to 60,000 people play pickleball nationwide, and players are trying to get it sanctioned as a sport in the Senior Olympics. Somewhere, a dog is wagging its tail. Ted Robbins, NPR News.