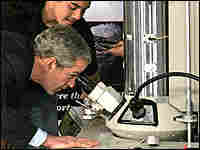 President Bush looks through an electron microscope beside student Adan Armas. On a visit to the Yvonne A. Ewell Townview Magnet Center in Dallas, Texas, the president promoted his new research and education initiatives. Paul J. Richards/AFP/Getty Images hide caption

One of the top domestic priorities for the Bush administration this year has been promotion of scientific research and education as a way to ensure American competitiveness in the world.

The editor-in-chief of 'Science Magazine' has been critical of President Bush.

The president unveiled the campaign in his State of the Union Address, vowing to "double the federal commitment to the most critical basic research programs in the physical sciences over the next 10 years."

The push for more funding comes after years of strong criticism of his administration's approach to scientific research. The basic complaint is that the Bush White House puts political ideology over science when writing policy or when determining who sits on advisory panels set up to provide expert input into decision making.

President Bush's Science Advisor says the new policies are not a response to criticism.

In 2004, the Union of Concerned Scientists issued a petition formally making that charge. It has now been signed by more than 8,000 scientists, including 49 Nobel laureates and 63 National Medal of Science recipients.

In the Feb. 17 issue of Science Magazine, editor-in-chief Dr. Donald Kennedy wrote an editorial critical of the White House. He focused on two recent incidents: Top NASA climate expert James Hansen was told not to talk to the media about his findings that voluntary measures proposed to deal with climate change won't be sufficient, and that the problem is getting worse. NASA has since said a 24-year-old Bush appointee who told Hansen not to talk no longer works there.

The other episode cited in the editorial deals with the National Oceanic and Atmospheric Administration, which Kennedy says has told its scientists not to do interviews about a study linking increased water temperatures to hurricane intensity.

Dr. John Marburger has been the president's Science Advisor for just over four years. He says the new proposals for increased science funding are not a response to critics of the president's science policy. And he describes criticism from the science community itself as "irrelevant."

There's no apparent sign of a political warming trend.

Marburger says he thinks the relationship between policy makers and scientists is made more difficult by the rapid pace of scientific progress. Kennedy says he does think there's no reason to see any real change in the current tensions, and both see this kind of debate playing a more prominent role in politics in the future.