Accessibility links
Naomi Watts: Robbed! Had she, in a just world, been nominated, Naomi Watts this Sunday would be accepting a best actress award for her role in King Kong, says Neda Ulaby. Herewith, an impassioned case for why Watts' performance makes her a giant among actresses. 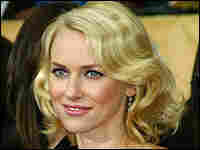 Here's to '06: Watts appears next in The Painted Veil, an adaptation of W. Somerset Maugham's novel. Reuters hide caption 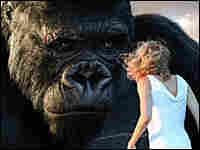 Naomi Watts is the flaxen screen star you may have admired in films such as Mulholland Dr., I Heart Huckabees and perhaps even The Ring. Her pronouncedly idiosyncratic choices suggest Watts is profoundly unmotivated by a yen for little gold statues. (In none of these movies does Watts, for example, go brunette.) In 2003, her best actress nomination for playing a disintegrating young widow in 21 Grams was trumped by Charlize Theron's even more gruesomely depressing performance in Monster.

This year, Naomi Watts deserved another Oscar nomination. Naomi Watts was cheated by the Academy of Motion Pictures Arts and Sciences. Had she, in a just world, been nominated, Watts this Sunday would be accepting a best actress award for her role in King Kong.

If you haven't seen Naomi Watts in King Kong, you missed what may be the most spectacular performance in the history of screen spectaculars. (Unless it's still playing on a big screen near you, in which case: Go.) There's a reason King Kong transcends its predictably excessive sequences -- the seething dinosaurs, the treacherous-limbed cave beasties, and the biplanes soaring noisily around the tip of the Empire State Building. That one reason is Watts, and a shot of her in a simple white dress, eyes brimming with tears, is more riveting than all the digital effects combined.

Going for the Gold

Ahead of the 78th Academy Awards on March 5, NPR.org offers a look at the overlooked aspects of Hollywood's big annual contest. Read online-only essays from NPR's arts staff all this week.

What enchants is not simply Watts' glorious beauty. It's her soul-baring relationship with the camera. Imagine this singularly daunting technical challenge: Naomi Watts acting her heart out, wrenchingly -- against a blue screen, a giant mechanical ape hand, and the guy who played Gollum pretending to be a monstrous primate. And she does it with elan. Did Judy Dench surmount such impossibilities? Did Charlize Theron? Ha! Not this year! And they've both won Oscars!

Watts doesn't just re-inhabit King Kong's Ann Darrow, she reinvents her. Her Ann is a vibrant homage to Fay Wray’s elegant pluck, but she is intellectually curious, empathic and occasionally fierce. Watts' performance is closer to Sigourney Weaver's in Gorillas in the Mist than Linda Hamilton's in TV's Beauty and the Beast. Ann Darrow is flawed -- she's a not-overly-talented actress literally starving for parts, for a reason -- but Watts allows Ann to be also an aching artist. She plays a sentimentalist unsentimentally. She projects the awe and guilt of humanity's unforgiving relationship to nature. And in its final scenes, Naomi Watts distills a humongous monster of a movie into a single essence: love.