Accessibility links
'Tsotsi,' a 'Gangster' Flick with a Heart Out of South Africa comes Tsotsi, one of five Oscar nominees for Best Foreign Language Film. The title means gangster in the slang spoken in Soweto township. The title character is a rough young man who finds hope.

Listen
'Tsotsi,' a 'Gangster' Flick with a Heart

Out of South Africa comes Tsotsi, one of five Oscar nominees for Best Foreign Language Film. The title means gangster in the slang spoken in Soweto township. The title character is a rough young man who finds hope. 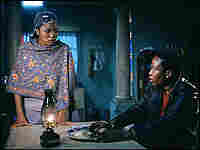 This is ALL THINGS CONSIDERED from NPR News. I'm Debbie Elliott. The word tsotsi means hoodlum or gangster in the slang spoken in South Africa's Soweto township. The word is also the title of a South African film that is among the five Oscar nominees for best foreign language film. Bob Mondello has our review.

Four young black South Africans strut down a street in a slum decked out in leather like the urban toughs they are. The leaders nickname is Tsotsi, and he lives up to its gangland implications masterminding robberies that often turn deadly. We watch one that does, and then we watch Tsotsi beat up a follower who questions why it had to. This is one heartless kid, so it's no great surprise when a bit later he steals a car and shoots the woman who screams for him to stop.

(Soundbite of car racing away)

MONDELLO: A few miles down the road, Tsotsi hears a sound from the backseat and realizes why the woman was so desperate to stop him.

MONDELLO: A baby. Tsotsi is so startled that he wrecks the car and almost walks away callously, but then, for some reason, he does something uncharacteristic. He goes back for the kid, stuffing it into a shopping bag and taking it home. At which point you realize this tough guy is just a kid himself, a teenager, less than fully formed and a lot less than fully capable of taking care of an infant as he will prove rather spectacularly during the rest of the film. Tsotsi is based on a novel by Athol Fugard who is better known for 20 astonishing plays that confronted apartheid on world stages for some three decades.

Fugard wrote Tsotsi as a very young man in 1960 at a time when blacks in South Africa were being forcibly resettled into townships. Its tale of a baby who you might say is being forcibly resettled, too, would certainly have resonated back then, but it wasn't published until two decades later. We are now two decades later than that, so director Gavin Hood has done some serious updating to address pressures facing South Africans today.

Among the cues that this is not a story of the 1960s is the music called kwaito, a hip-hop style that sprang up in the townships only after the end of apartheid.

This music places Tsotsi firmly in the present, as do the billboards for AIDS prevention you see everywhere in the film. AIDS, of course, is ravaging South Africa today as surely as apartheid did a generation ago, and the toll again weighs most heavily on children and on families, which is what Tsotsi is all about.

If I'm making the film sound downbeat, incidentally, I'm doing it a disservice. Fugard is an enormously generous writer, and in Tsotsi, he gave the filmmakers a framework that lets them find what he always finds in his best work, hope and humanity in characters that society writes off as irredeemable. I'm Bob Mondello.