Accessibility links
Finding a Way: Peachy French Toast in Winter When Boston food writer Betsy Block started craving French toast topped with peaches, nothing could stop her: Not the time of year, not ethical dilemmas. She explains how she came to her decision -- and shares a recipe for the rich, buttery treat. 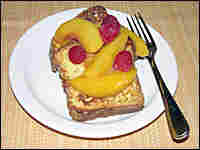 When I recently got a recipe for Brioche French Toast with Native Peaches from Tim Partridge, a renowned Boston chef, I found myself in a moral quandary.

Here we were, in the midst of one of our epic winters, and I'd just gotten a recipe from a chef who's devoted to sustainable agriculture, featuring a fruit that was so out of season I could barely remember what it tasted like.

Sure, the calendar says it's almost spring, but around here we won't be seeing local peaches until, at the earliest, mid-summer. Plus, I knew that any "fresh" peaches I'd find this time of year would be stone-hard and flown in from faraway lands, and that this would render the whole point of the recipe obsolete. And yet, I wanted that French toast. Badly.

Fortunately, when necessary, I can be a master of rationalization. So while I know that buying peaches in winter is wrong, I also know that if we took "sustainably grown" too seriously here in New England, we'd all have died of rickets long ago.

And so, I bypassed the fresh (but not domestic) peaches and took things a step further by buying frozen. The fact that I wouldn't have to blanch, peel and slice them only added to my guilty pleasure.

I invited some friends over for a "breakfast dinner," one of my family's favorite, most soul-warming wintertime meals. My guests had no idea that there had been an intense philosophical maelstrom swirling around the house before dinner. They were innocents, and in their childlike naivete they raved about the meal. "A feast as usual," one of them enthused.

And even though I knew all too well about my breach of ethics, I had to agree. The French toast was an embarrassment of richness: buttery brioche dipped in cream and eggs then sauteed until crisp and brown. The outer crunch gave way to a soft, smooth interior. The peaches offered a slightly tangy contrast.

I grew worried when one outgoing friend didn't say a word the entire time she was eating -- and was relieved when I saw her go back for seconds. After she finished, she leaned back with a smile and said, "Now I can talk again." Her silence, it turned out, had been the best compliment of the night.

Though I'm sure that fresh native peaches would have elevated this dish to even higher heights, when it came down to it, there was something uplifting about watching the frozen fruit slowly thawing within an aromatic blend of butter, wine and syrup. I was hoping the same thing might happen to me as I stood at the stove, because as a -- you know, Native Southerner (I'm originally from D.C.) -- these Boston winters hurt. Maybe frozen peaches had been the perfect choice after all.

What I learned when faced with an impossibly enticing recipe for Brioche French Toast with Native Peaches is that when it comes to sustainability, I'm not a strict constructionist. Peaches in March? I just consider it outsourcing locally grown. After all, we are one world -- some months more than others.

2 cups half and half

A pinch of cinnamon

A pinch of freshly grated nutmeg

A pinch of salt

Zest of one orange

8 slices of day-old brioche, sliced thick (or challah if you can't find brioche, and definitely do not make your own -- unless you have a lot more time on your hands than I do)

6 peaches peeled and rough-chopped (or one to two bags frozen, depending on how much you're craving peaches)

Heat the butter and peaches over medium heat and saute until peaches soften, approximately five minutes. (I didn't bother to thaw the frozen peaches before tossing them into the pan.) Add white wine and reduce until wine has evaporated. Add maple syrup and mix into peaches. Remove from heat.

In another bowl, combine eggs, half and half, sugar, cinnamon, nutmeg, salt, grand marnier and orange zest. Whisk briskly to incorporate all ingredients.

Heat a nonstick skillet over medium heat with 1 tablespoon of butter (you will need to do this in batches; you probably won't need to add more butter, but you might decide to for taste). Soak bread slices in egg mixture for two minutes and fry on one side for approximately two minutes or until evenly browned, turn the bread slices and cook two more minutes to brown the other side. Place in low oven while cooking rest of brioche.

Spoon peaches over fried brioche and garnish with lightly whipped and sweetened heavy cream. If you like, serve with maple syrup (and a knowing smile).