Accessibility links
Patterns of Life: Margi Scharff's 'Road Collages' When Margi Scharff felt stomach pain in India, she assumed it was "Delhi Belly," an ailment often afflicting visitors. The 51-year-old artist, based in Los Angeles, was instead told she has advanced ovarian cancer. 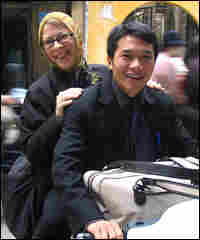 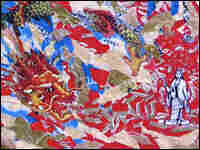 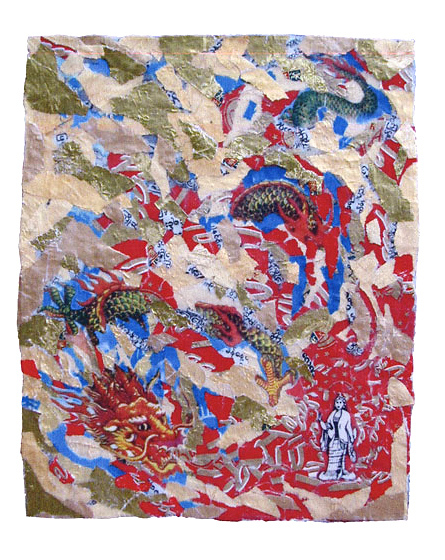 'Lady Fights the Dragon' (dedicated to Aung San Suu Kyi). Materials: lady off matchbox from a Bay of Bengal beach; dragon from incense wrapping found near a giant Buddha statue in Pyay; cigarette packages and linings from Rangoon streets. 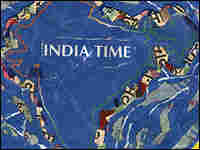 Many people in mid-life dream of breaking free, of exchanging their daily routine for a life of exploration. In the early '90s, Margi Scharff actually did it. The artist, based in Los Angeles, had grown tired of lecturing at colleges.

So she began making art based on her travels -- and not even a diagnosis of cancer has stopped her. For Scharff, who is originally from Memphis, Tenn., life and art have been as much about the journey as the destination.

Scharff on the Web

In 1994, Scharff was living in Tijuana, Mexico, when she started collecting things she'd find on the road near her house. Then she began, in her own words, "making assemblages and sculptures with these kinds of material."

It should be noted that to many, the materials in question would be considered to be roadside trash. But in Scharff's hands, discarded cigarette packs, matchboxes and candy wrappers were the raw materials for small, intricate pictures whose colorful designs reflect on the culture that discarded it.

Scharff's "road collages" inspired her to travel more, to collect more raw materials -- or litter -- from other nations, other cultures. Over a period of five years, she visited China, Laos, Thailand, Cambodia and Malaysia; India, Nepal, Bangladesh and Burma.

Traveling on a thin budget and spending very little on supplies, Scharff's project was going well. In Kathmandu, her work caught the eye of the journalist and author Daniel Lak. A longtime employee of the BBC, Lak made a film about Scharff, Rangi Changi: The Color of Art". The title refers to a Nepali term for "all colors mixed together."

While visiting the Hindu holy city of Varanasi on the Ganges River, Scharff began to feel ill. She moved on to New Delhi, thinking she had picked up one of the gastro-intestinal ailments that afflict travelers. Tests, however, revealed something far more serious: ovarian cancer, a disease Scharff says is in her family history.

"It was shocking but at the same time not shocking," Scharff said. "I knew it was in my family history; I always knew that there was a possibility that I might not have a long life. And in some ways, that may have been one of the things that gave me the strength and courage to go out and do these journeys."

While many in her position would have taken the next flight back to California, Scharff has been thankful to stay in India. "You know, I was really lucky to land here," she said, noting that even with a terminal disease (her cancer is at stage four), she sees compassion, wisdom and medical skill around her. "I feel so taken care of here."

As for her fears of dying, Scharff says, "I've lived a thousand life times really… if you've been to Varanasi, you learn right away that death is not death. It's an extended journey."

If that sounds like a concession, it's a conditional one. Far from quitting, Scharff is working on several projects, including a book that combines her writing with the road collages she's created in her travels.

It's all part of a plan for self-preservation, according to Scharff. "If I can stay alive, keep my spirit alive in the creative sense," she says, "that will help extend my life a little longer as well."