Accessibility links
For Toussaint, 'Our New Orleans' Lives On : World Cafe For a time, legendary New Orleans musician Allen Toussaint was missing during the aftermath of Hurricane Katrina. Since his recovery, the songwriter has been on a mission to play and record music honoring his city — and helping it rebuild.

Listen
For Toussaint, 'Our New Orleans' Lives On

For Toussaint, 'Our New Orleans' Lives On

In late 2005, Toussaint played several songs live at NPR. Among the highlights:

Legendary New Orleans musician and producer Allen Toussaint has played a major role in Our New Orleans, a benefit album recorded in the aftermath of Hurricane Katrina. 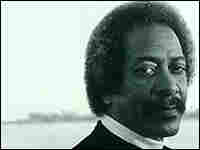 In 1996, Toussaint launched his own label, NYNO Records, which focuses on the music of New York and New Orleans. Toussaint has produced every album released under the label. hide caption

Since the 1950s, the Rock and Roll Hall of Famer has played an integral role in the "Nawlins" musical community.

While in his early 20s, after already making a splash on the New Orleans music scene Toussaint accumulated a string of hits for Minit Records, producing, writing, arranging and often performing on tracks by people like Ernie K-Doe, Irma Thomas and the Neville Brothers. Toussaint cut his first solo record for RCA in 1958, with more to follow.

Several of his earlier tunes became instrumental standards, including "Whipped Cream" which was the Herb Alpert hit also used as the theme for television's <>The Dating Game. In the 1970s, Toussaint produced some of the most influential recordings of the time, including Dr. John's "Right Place, Wrong Time" and Labelle's "Lady Marmalade."

Through new recordings from the likes of Irma Thomas, Dr. John, Buckwheat Zydeco and more, Our New Orleans reflects on what the city once was, what it became after the devastation of Hurricane Katrina and the flood, and what the future holds.

Toussaint contributes two tracks, his solo piano rendition of "Tipitina and Me" and the rhythmic "Yes We Can Can." The album opens with "Yes We Can Can," produced by the great Joe Henry.

The song, written in the '70s, has now reached an almost anthemic status, as Toussaint urgently sings: "Now is the time for all good men/ To get together with one another/ Oh yes we can, I know we can can."