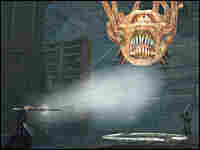 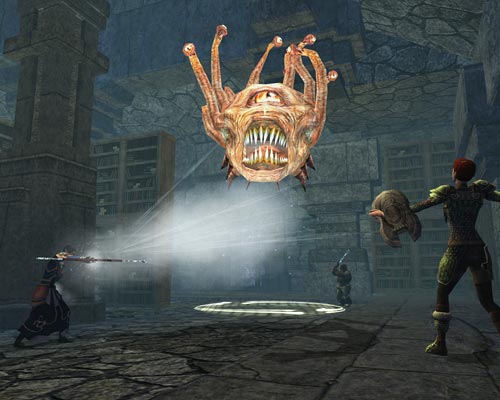 A new online game is making its debut today, bringing together two fantasy worlds, the decidedly offline world of Dungeons and Dragons, which has been around since the 1970s, and the online world of fantasy games such as World of Warcraft.

NPR's Robert Holt has a review of the first Dungeons and Dragons online game.

Unidentified Character: I cast my eyes to the horizon and the city was Stormreach.

Let's get this out of the way right now. Yes, I was one of those geeks who played D&D in middle school and high school, okay, even a little bit in college. We sat around the huge table filled with takeout food, many sided dice, miniature figures and graph paper. My friends Dave and John were the Dungeon Masters. They described what we saw and all we encountered.

I know that most people think of all night D&D sessions as dens of arcane geekerey, and they most certainly were, but also they were social, demented and sad, but social. Dungeons and Dragons Online: Stormreach, or DDO, attempts to recreate the D&D experience on your computer.

Unidentified Character: You notice many different footprints in the dust. Heavy boot tracks made by humans, dwarves and Warforged70 entwine with the delicate prints of halflings and elves.

HOLT: Hmm, a virtual Dungeon Master. It almost makes me feel like I'm playing with my old friend Dave.

Unidentified Character: This wooden ladder has been polished by the grasp of many hands.

HOLT: Part of me loved it, and part of me thought it was just blatant exposition. But it is an essential part of the real D&D experience. I really like it, because they don't overdo it. When I attacked my first monster, a virtual 20-sided die appeared on the screen. I rolled a 17, a hit. It's just like in real D&D, but I don't have to calculate anything, and I can turn the dice off if I don't want to see the details.

And then there are the social aspects of real D&D. While it will never be the same as sitting around the table with friends, DDO does a good job of carrying over the human interaction of real D&D. DDO makes it very easy to find other people playing the game online. It has built-in voice chat, enabling players to actually talk to each other as they trek through dank dungeons.

HOLT: The game is beautiful, but the colors are a little drab, and the game doesn't look as polished as World of Warcraft, or WOW for short. In DDO, the dungeons all look the same after a while, and it's harder to pick up than WOW. This is to be expected. The D&D rulebooks are hundreds of pages long.

As a geek, I revel in the complexity, but it may be a turn off for some.

If you only played real D&D, you'll love DDO. If you've never played these kinds of games before, get WOW instead. If you've already played WOW, wait a year or so until DDO matures. As much as I enjoyed DDO, there are some things that an online game can never recreate, the pleasure of sitting around the table eating greasy food with good friends, journeying together to far off places.

Back in high school, my friend and dungeon master Dave created the Ummagumma wand for my character. Half the time it worked, and the rest of the time it would sprout flowers. I think Dave was messing with me. Regardless, I'll always remember my D&D days. And as beautiful as these video games are, the pictures in our imaginations are far better than anything in a game.

BLOCK: That is NPR's Robert Holt with his review of Dungeons and Dragons Online: Stormreach.