Just days after Hurricane Katrina devastated the Gulf Coast, NPR's Farai Chideya spoke with New Orleans resident Brenda Morris, who was forced to evacuate her ailing brother and mother when the levees broke. Morris describes the fate of her family and her neighborhood. 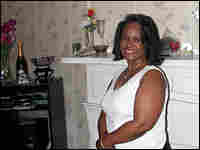 From NPR News, this is NEWS AND NOTES. I'm Ed Gordon.

Earlier this week, NPR's Farai Chideya joined me to talk about her recent trip to New Orleans. Farai revisited some of the people she met during Hurricane Katrina's aftermath. One of those people was Brenda Morris. The day Katrina hit, the Morris family found themselves surrounded by flood waters. Brenda was not only caring for her children, but a mother who needed dialysis and a brother with lung cancer who needed oxygen. Farai spoke with Brenda last August.

Ms. BRENDA MORRIS (Louisiana Resident): I went to the hospital and they turned me back because they say they're not taking no one. I asked, I said, what should I do? They said, we don't know.

What are you going to do if you can't get any care for your brother or your mother in the next couple of days?

Ms. MORRIS: Hi. How are you doing?

CHIDEYA: I'm good. Is this Brenda?

CHIDEYA: Thank you so much for letting us come by.

Ms. MORRIS: Okay. Thank you for coming. How you doing?

CHIDEYA: We spoke to you Brenda when you were trapped here in the house with your sick mother, your sick brother, other relatives who had come. How did you feel at time?

Ms. MORRIS: Oh, I was real scared, afraid because my mother was very ill and my brother was very ill--and I just felt I was responsible for their lives. And I really didn't know anything until my neighbor across the street--and she came with her car and the radio was on, and she was like Brenda, you all have three hours to get out of here, because the levee has broken. And I'm like, no. Nobody said anything about this and there's no water anywhere. So I'm like where did the levee break?

The hospitals were putting patients out, so we couldn't go to the hospital. So I didn't have a choice. So we finally packed up, you know, everybody. We had like two cars and a truck. We just stated driving. So my sister had her cell phone and just called a cousin of ours that lived in Baton Rouge.

I mean she already had people there from LaPlace, like two or three families. So a total of 26 people was in one house.

It was just so scary, you know, because I'm like, they still need help. We need hospitals. So once we got to the house, we called around to a hospice, because my brother, I had him and he was in hospice in New Orleans. So I found out there was Genesis Hospice out there. I contacted them and they came out immediately with mattresses and oxygen and stuff getting him together.

So there was Rita right behind Katrina. The lights went out in Baton Rouge from Rita, like a day and a half. He started having anxiety attacks, because he felt that he couldn't breathe without the big mobile oxygen tank. So we did have the little portable ones, but he just felt like he couldn't breathe. It wasn't enough coming through. So he started having anxiety attacks and stuff, and he started just deteriorating.

Deep down inside, you know, I was like I just wanted him to make it back home, before he died in Baton Rouge.

CHIDEYA: Do you think that in some ways the shock and the trauma killed him?

Ms. MORRIS: I really do think so, because when he was home he wouldn't give up. He would walk around. He would go from my house to my mother's house, which is across the street and he would walk everyday.

CHIDEYA: How did it make you feel that he didn't die at home?

Ms. MORRIS: It hurted me, it really did. It hurted me because this is where he wanted to be. And he really didn't really want to go, and I'm like, we have to go. We don't have a choice.

CHIDEYA: I'm sorry for all of your losses. Tell us how is your mother is doing?

Ms. MORRIS: She's not doing good. She's deteriorating. She has lost a lot of weight. She was in the hospital like a week, had two blood transfusions. She has wounds on both of her legs now, and now they're talking about cutting one of them off. So she's to the point now where she just wants to give up, and I'm like, don't give up. You fight the pain. Don't let the pain fight you, you know.

CHIDEYA: We spoke with your sister, Joyce. How is she doing? How is she holding up with all of this?

Ms. MORRIS: Joyce is--she called me crying. She was saying, I can't do it anymore. Momma just wants to give up and I can't do it. She keeps telling people she's dying. And I'm like, just make her fight, make her get up, make her walk to circulate her legs, you know. Make her move around. But she was like, she won't do it for me. But when she's here, I make her do those things, because I had her in therapy and we didn't need home healthcare, because we took care of her.

CHIDEYA: What's ahead for you now? What do you want to do with your life?

Ms. MORRIS: I already told my kids it's just time to move on. I said it's time to get a job, get back on my feet, you know, and just start taking care of my immediate family. But I still go back and forth to see my mother. But she's so afraid that she's coming back to stay, and she doesn't want to stay because she said she doesn't have her own house.

But I'm like, so you come and leave with me. I'll get out my bed. You can have my bed. I can buy an air mattress, it doesn't matter. I mean, that's my mother and that's the only mother I have. I lost my father. I lost my brother. I lost my sister. All I have is one sister left and my mother.

CHIDEYA: What does family mean to you?

Ms. MORRIS: It means--I mean, you care for the people that love you. They've always loved me; they've always been there for me. And I want to do the same in return. So I'm like, my mom is at that point and now, and so it will just be me my sister. And I want her back in the city. I don't want her to stay out in Baton Rouge. I'm like, we need to get closer. We need to be around each other all the time. So I'm like we need to be together, everybody.