Accessibility links
An Actor's Best Friend? The Casting Director In the final part of a series on the movie industry, we take a look at the Hollywood job on which so many acting jobs depend: the casting director. Casting directors are on the front line for actors, agents and directors. They must be fans and professionals at the same time. 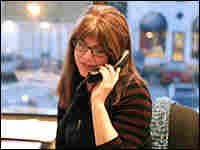 Margery Simkin is a 26-year casting veteran. She has worked on films such as Top Gun and Field of Dreams. J. Michael Muro hide caption 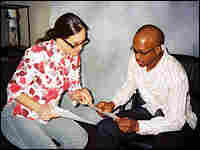 Casting directors like Debra Zane and Margery Simkin don't usually deliver major stars such as Tom Hanks, Julia Roberts or George Clooney. Their names get a movie made. Zane and Simkin join in the mad scramble to assemble all the actors around the box-office heavyweights.

For a single film, Zane says she can provide 40 or more actors. Zane cast American Beauty, the Oscar winner for best picture in 1999. Her other credits include The Terminal, Seabiscuit, Ocean's Eleven and Ocean's Twelve, and Catch Me If You Can.

Actor Stephan Fuller is one of Zane's clients. Fuller got work in a Steven Spielberg film by taking his resume to Zane's office after business hours. "I walked up here and put it in the slot in that door right there, and I remember seeing my headshot fall on the floor, going 'Great, when they walk in they're gonna step on my head shot."

That didn't happen. Zane called Fuller in for an audition, and two days later he was cast in The Terminal with Tom Hanks.

Margery Simkin has been casting films for 26 years. She got her first casting job while living in New York City. A friend got a better offer and asked Simkin to take over her old job. The assignment: find high school kids for a film.

Simkin says she had no experience but was resourceful. "I would go around the neighborhoods and lurk on the Lower East Side. At one point I was called into one of the local social clubs, because I think they thought I was a new hooker that hadn't checked in, 'cause I was going up and down the street every day and going up to young boys."

Her film career was launched. Simkin has been casting director for Erin Brockovich, Fear and Loathing in Las Vegas and Top Gun.

Simkin says she loves the work. "I get private theatrical [performances] in my office all the time," she says, "and it's really, really thrilling. Sometimes I've seen something nobody else gets to see."

That was the case when Simkin cast the 1989 Kevin Costner baseball film Field of Dreams. One of the roles, that of Costner's father as a young man, was small but tough to fill. "Hundreds of guys came in," she remembers. "And then there was this moment. Dwyer Brown walked in and there was no doubt in my mind. There was something so wonderfully old-fashioned about him, so moving."

She watches the scene again in her office. "I'm crying again," she says. "It makes me cry every time. It's the way he's holding the moment."

The power of an actor to move an audience in a film begins with his or her power to move a casting director in a busy office. Seeing so many hopefuls and watching so many auditions, casting directors like Simkin and Zane are fans and professionals at the same time. They must be judgmental, dismissive and efficient. But they need to stay open to surprise, to the art of acting -- and to the vulnerability of the people who come to try out.

And what happens to Zane at parties when people find out what she does for a living? "It's not even parties," she says, "it's relatives, cousins of my mother. I used to think that people were just being nice to me, but then I realized, 'Oh my God.'"